Rakuten and the curious case of the missing 5G plan

Japanese billionaire Hiroshi Mikitani is known mainly as the founder and CEO of Rakuten, Japan's answer to Amazon. But his main job these days is to persuade the world that a costly venture into the telecom sector still makes sense.

It has become increasingly hard. Despite boasts that its technology is cheap to install and run compared with rivals, the cost of building a fourth mobile network in Japan has winded Rakuten with Sumo force. In 2017, when it was still pondering its mobile plans, the e-commerce business made a net profit of about 110.5 billion Japanese yen (US$1 billion) on revenues of JPY944.5 billion ($8.6 billion). For the recently ended first quarter, net losses reached JPY25.8 billion ($240 million), despite the generation of JPY391.5 billion ($3.6 billion) in sales.

Network costs have turned out to be much higher than expected because Rakuten grossly underestimated how much equipment it would need to cover Japan. Until this year, it had reckoned that 28,000 4G basestations would do for population coverage of 96%. But the number was sharply increased to 44,000 in February, adding around $2 billion to Rakuten's network bill. To fund the rollout, Mikitani last month sold shares worth $2.2 billion to Japan Post Holdings, Tencent and Walmart. 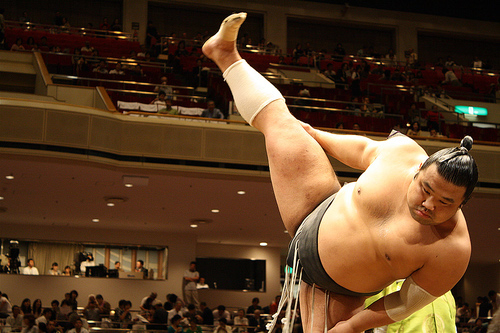 Rakuten's losses from its mobile buildout are looking Sumo-sized.

Operating losses at Rakuten Mobile, the networks subsidiary, exceeded JPY97 billion ($890 million) in the first quarter, up from about JPY37 billion ($340 million) a year earlier. Rakuten insists consumers have been enthused by new pricing plans and a deal with Apple for the iPhone, Japan's most popular device. Yet in a market of about 125 million people, take-up has been undeniably sluggish. More than a year after it first launched its service, Rakuten has received just 4.1 million "applications," it told reporters today.

The company message continues to be that its telecom business will break even in 2023, and there are reasons to be optimistic. Mobile sales grew 39% in the first quarter, to nearly JPY69 billion ($630 million), but include revenues from the energy, content and Internet businesses, as well as Rakuten's older MVNO (mobile virtual network operator) unit. Network customers have largely taken advantage of free offers for a limited duration. Soon, they will have to pay.

But leading analysts are downbeat. "Rakuten remains bullish on the opportunity, but the required customer base to cover the cost is becoming unrealistic," said New Street Research in a note issued today. "One year in, during a period when Rakuten has not charged for its service, the company has gained 4.1 million applications, but we now calculate they need 20 million just to break even at current costs."

Those costs should at least begin to fall once Rakuten has built most of its network. It now claims to have reached 80% population coverage and expects to hit the 96% target by the summer. The 4G focus will then presumably shift from rollout to maintenance and operations. Some of the benefits of Rakuten's cutting-edge systems and heavy reliance on automation may become visible.

But the job does not end with 4G, where Rakuten's spectrum constraints put it at a clear disadvantage to rivals. Investment in 5G is arguably far more important to the company's future. Rakuten is not years behind its competitors in this technology and holds the same amount of mid-band spectrum. Yet other than highlighting its network partners and technology innovation, it has had curiously little to say about 5G so far.

The latest data, moreover, suggests the competition has already opened up a yawning gap. NTT DoCoMo, Japan's biggest mobile operator, now boasts 7,100 5G basestations, as opposed to the 1,000 that Rakuten has installed, for instance. The market leader also claims 3 million of its 82.6 million mobile customers are using 5G services. It aims to have 20,000 basestations in use by March next year and estimates that investments in 5G will total JPY1 trillion ($9.1 billion) between 2019 and 2023.

Rakuten did not respond to questions about 5G coverage and rollout targets, but most of the funds raised from its recent sale of shares have been allocated to 4G. In a breakdown of its plans last month, the company said it would spend JPY184 billion ($1.7 billion) on 4G basestations and just JPY31 billion ($280 million) on 5G ones. Another JPY25 billion ($230 million) is intended for "equipment common to 4G and 5G," it revealed.

NTT DoCoMo is certainly not its only 5G threat. KDDI says it had 10,000 5G basestations deployed at the end of March and is targeting 50,000 by March next year, a number it estimates will provide population coverage of 90%. Last year alone, it spent about JPY174 billion ($1.6 billion) on 4G and 5G rollout, as well as JPY200 billion ($1.8 billion) on "common equipment." SoftBank, the third operator, has precisely the same target of 50,000 basestations and 90% population coverage by March 2022.

Even though Rakuten is relying on the same 5G spectrum bands as the opposition, it might conceivably require fewer basestations. Tareq Amin, Rakuten Mobile's chief technology officer, reckons simplified, state-of-the-art designs have given him a 30% to 40% coverage improvement versus rivals.

Rakuten is evidently confident that 44,000 4G sites will be sufficient for a near-nationwide service. NTT DoCoMo has 80,000 sites in total, while KDDI maintains 110,000 and SoftBank as many as 230,000. But if KDDI and SoftBank expect to reach 90% of people with 50,000 5G basestations, Rakuten would presumably need around 35,700 if its site coverage were 40% better. To arrive at that figure from about 1,000 today sounds like a major effort.

One day in the future, when Rakuten's network is built and its loss-making reports have been consigned to company archives, it may prove hard to beat. While the cloud and software technologies it has used are not off-limits to other companies, Japan's older service providers will struggle to be as efficient, Amin told reporters earlier this year.

"How will you deal with reskilling and retraining an organization that has not necessarily adapted to a world in which software is the dominant platform?" he said. "This is something we don't have to do. The company was built on Internet-scale architecture and it was very easy for me to leverage and extract."

Investors are being asked to show a lot of faith, and there are signs it may be wavering. Rakuten's share price fell 3.6% in Japan today as analysts took stock of the mounting losses. If nothing else, those are proof that low-cost software can only go so far in such a capital-intensive industry. And unless a 5G deployment on top of the existing network turns out to be dirt cheap, profitability could be a long way off.