Qualcomm still expects global 5G handset shipments this year of between 175 and 225 million. That's the prediction the company provided before the COVID-19 outbreak, and that's the figure it's sticking with.

"Launches [of 5G] across all regions remain on track," Qualcomm CFO Akash Palkhiwala said during the company's quarterly conference call with analysts Wednesday. "While we expect some minor changes to the launch timing and sell-through of certain devices, our calendar 2020 estimates remain unchanged."

Qualcomm's Cristiano Amon  the company's 5G chief  offered a few more comments about the status of 5G around the world. He said US operators are ahead of pace in their 5G deployments, while some operators in Europe may fall behind schedule due in part to spectrum auction delays. He said that 5G remains a hot topic in China, with 5G phones accounting for fully 30% of all sales in the country in March, up from 19% in December.

And Amon said that operators in Japan and Korea are moving forward with 5G launches in millimeter wave (mmWave) spectrum this year and that more would join them next year. That's noteworthy considering US operators have been mostly alone in the mmWave 5G arena, raising questions about the value of such spectrum. Most global 5G launches have been in the spectrum below 6GHz.

Taken together, the comments from Qualcomm  which supplies the core 5G connectivity chips for the vast majority of the world's early 5G phones  indicate that, so far, 5G deployments remain mostly untouched by the global pandemic.

"5G is progressing as planned," Qualcomm CEO Steve Mollenkopf said during the call, adding that the company expects pandemic trends like telehealth and remote learning could increase demand for 5G throughout this year and next year.

And what of Apple's expected release of a 5G iPhone later this year? Qualcomm executives didn't mention that specifically, but analysts on the call questioned whether an "inflection point" for 5G is still expected later this year  a likely reference to Apple's planned gadget. Qualcomm's Mollenkopf said he expects no big delays.

Regardless, some analysts aren't expecting much of a 5G catalyst from the device. "We acknowledge that wireless operators will increase ad spend and use new network implementations to boost interest in 5G, but we still don't believe it will be enough to drive a supercycle for Apple to the scale that investors might be expecting. In addition, the COVID-19 pandemic now threatens our prediction of a stabilization in upgrade rates in 2020 based on near-term store closings and intermediate-term economic impacts," wrote the Wall Street analysts at Lightshed in a recent post on Apple.

In its most recent quarter, Qualcomm reported a 21% drop in overall sales of smartphones due to COVID-19. Further, the company said it expects the coronavirus to cut into smartphone sales in its current quarter by as much as 30%. 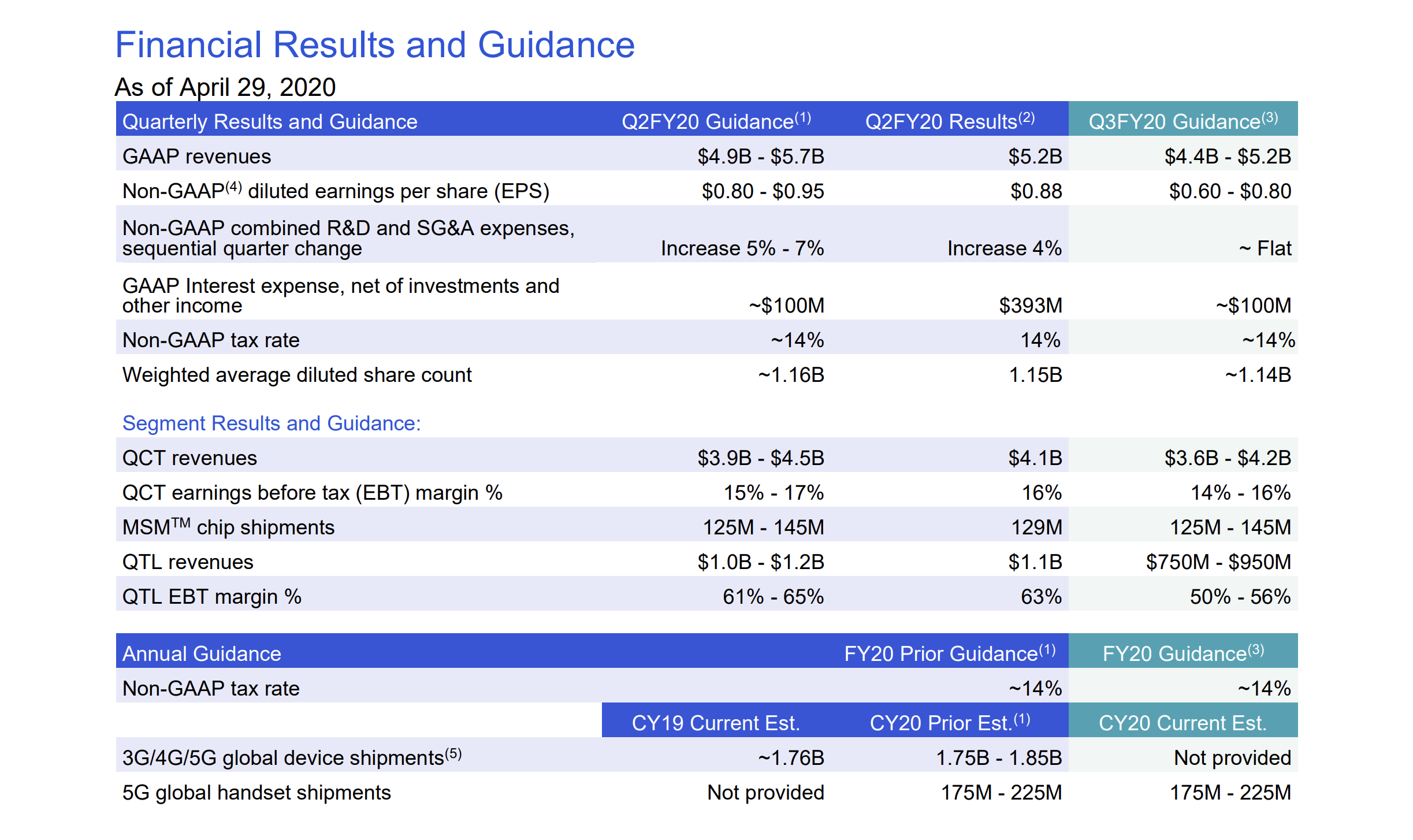 Qualcomm detailed the effects of COVID-19 on its business and its outlook. Click here for a larger version of this image.
(Source: Qualcomm)

However, Qualcomm said it is expecting a global return to normal starting around June, based on the trends the company saw in China. The country was the first to institute quarantines due to COVID-19 starting in January, but those were mostly lifted by March.

In its most recent quarter, Qualcomm reported a 5% rise in revenue to $5.22 billion, which Reuters noted beat Wall Street analyst estimates. The company's stock was up roughly 5% immediately after the company released its results.