Scan the mobile section of Nokia's latest results statement and it is nearly the reverse of Ericsson's. When the Swedish equipment maker published its own first-quarter figures earlier this month, network sales were up 4% in constant currency, but the gross margin took a small hit, blamed by management on supply chain fortification. At Nokia, mobile revenues are down 4% (organically) while profitability has soared. Sales were hurt by supply chain constraints, said Pekka Lundmark, Nokia's CEO.

Restoring profitability at the Finnish company has been Lundmark's priority ever since he took charge in August 2020. Back then, Nokia had just reported a dismal 3.3% operating margin for its second quarter and a derisory net profit of 85 million ($89 million) on its 5.1 billion ($5.4 billion) in sales. Still bloated after swallowing Alcatel-Lucent in 2016, it had cut spending on research and development (R&D) and lost cost competitiveness against rivals. 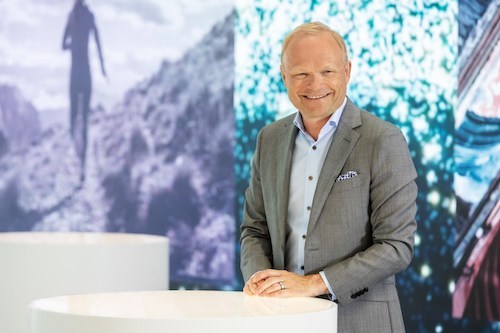 Nokia's profitability is up under CEO Pekka Lundmark, who took over in mid-2020.
(Source: Nokia)

Were it not for a 104 million ($109 million) charge related to its exit from Russia, Nokia's operating margin would have been 8.6%. But the reported number of 6.6% is still twice what Nokia managed in the quarter before Lundmark became boss. Dented by Russia, net income fell 17%, to 219 million ($230 million)  much higher than levels reported under Rajeev Suri, Lundmark's predecessor.

Investors like this story. In Helsinki this morning, Nokia's share price opened 3% higher, and it has risen 22% since Lundmark started as CEO. Any doubts  and Nokia still trades at a 12% discount to its share price five years ago  must be over sales. Parts of the business are performing strongly, and especially a fixed-line unit lifted by a fiber boom. But mobile, responsible for as much as 42% of turnover, has yet to hit its stride.

Thanks largely to forces outside Nokia's control, overall revenues were up 5%, to about 5.3 billion ($5.6 billion). But the constant-currency improvement was only 1%, compared with the 3% Ericsson managed across its entire business. The difference of 8 percentage points between the two Nordic vendors in mobile is a potential concern for Nokia shareholders. References to Nokia's mobile market share and 5G conversion rates  introduced by Suri to reassure investors Nokia was not falling further behind  disappeared from the quarterly report this time round. 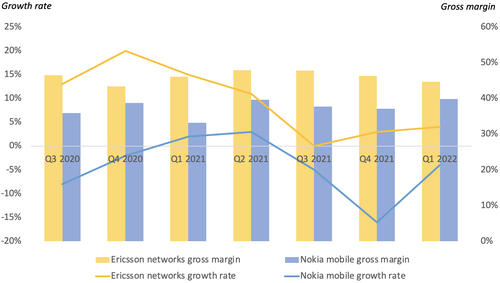 Whatever the situation, that is not a positive step for transparency. Given management remarks, the latest worry may be that Nokia's determination to boost profitability has left it more exposed than Ericsson is to supply chain problems. The industry is still waiting for a mobile sales revival that proves a 5G product refresh has fully paid off.

Nokia says it is confident mobile "will return to growth in 2022" after sales fell 5%, on a constant-currency basis, in 2021. Last year, for sure, was a nasty one for comparisons due to earlier setbacks in China, where Nokia failed in 2020 to land any 5G radio contracts during the first phase of rollout, and especially the US, where a 5G deal announced by Verizon in late 2020 went to Samsung rather than Nokia. But the first-quarter dip puts greater pressure on Nokia over the remainder of this year. The mid-point of the company outlook, moreover, implies a 6% increase in total reported sales for 2022. Last year, they grew just 2%.

All hands on deck

Whether in mobile, fixed or other divisions, sales growth will be hard to deliver without sufficient numbers of people. For that reason, Lundmark gave a strong signal this morning that staff cuts will be at the lower end of earlier guidance, which indicated Nokia was aiming for a workforce of between 80,000 and 85,000 employees.

"When we talked about headcount, we gave a scale and we said it would depend on market conditions finally where exactly we will end up," Lundmark told Light Reading. "Now you will have seen the market conditions have been strong. We have had strong orders, strong growth, especially in network infrastructure, and of course you do need hands to deliver everything we have sold, and that does impact the headcount development going forward."

Profitability is expected to hold up this year, though. Nokia's current outlook guides for a comparable operating margin of between 11% and 13.5%, against the 12.5% it achieved for 2021. The prices Nokia charges for its products and services will have to increase to cover the rising cost of components and other inflationary effects, said Lundmark.

"Absolutely, the goal in our business is to pass on that inflation to customer prices," he said in answer to Light Reading's questions. "We do not expect to be able to absorb that just into our margins, even though the underlying technology competitiveness is improving and supporting us in that situation."

Cue some customer conversations that may be a challenge, depending on what Nokia's rivals do. "We are engaging with our customers to find ways to pass on inflation to customer prices and this is easier in new contracts than in existing contracts," said Lundmark. "A three-year contract would be a typical proxy of what we have in our backlog."