Senior executives from Ericsson and Nokia typically insist they would rather talk tech than geopolitics, and yet both companies owe many of their 5G gains to the storm surrounding Huawei.

Booted out of several Western democracies on security grounds, the Chinese behemoth has left a vacuum its Nordic rivals have filled.

Russia's war in Ukraine could now open further doors for them. When Vladimir Putin sent troops over the border, Ericsson and Nokia were quick to suspend deliveries to their Russian customers.

To comply with European and US sanctions, and protect their corporate reputations, they have subsequently gone further, halting most business and  in Nokia's case  preparing to exit Russia entirely. For their Chinese rivals, the approach to Russia seems to be a case of business as usual.

The upshot could be greater pressure on operators not to use either Huawei or ZTE, a smaller Chinese vendor that continues to supply Russian operators, according to a database maintained by the Yale School of Management.

Tommi Uitto, Nokia's head of mobile, believes the latest geopolitical developments could translate into an opportunity for his company to grow its market share. 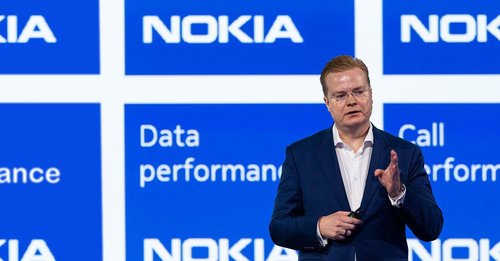 "First and foremost about the war in Ukraine is that it is a horrible thing," he told Light Reading during a meeting in London.

"But what it means for our business, apart from exiting Russia and trying to help keep up the networks in Ukraine, is that there could be further geopolitical pressure in some countries to reduce exposure to particular vendors."

Both Chinese vendors could face US sanctions if they are caught shipping products to Russia that include US-origin components.

The risk for ZTE looks greater: it has recently been identified as a customer by several US component suppliers, including AMD, Lumentum and NeoPhotonics, and unlike Huawei is not currently named on any US trade blacklist.

But continued reliance on Huawei looks increasingly awkward for European operators amid the conflict in Ukraine.

While governments in Sweden and the UK have issued formal bans, less restrictive conditions in other countries have allowed major service providers including Deutsche Telekom, Orange and Vodafone to maintain relationships with China's biggest vendor.

To fierce opponents, they are paying a company that still supplies critical infrastructure to Putin's regime.

Uitto says various countries are still "pondering what to do," noting gains Nokia has already made in several markets where Chinese vendors are now banned or heavily restricted.

They include deals with BCE and Telus in Canada, as well as Australia's TPG (formerly Vodafone Hutchison Australia). In the UK, the Finnish vendor has grown its mobile business with BT since the government placed limits on Huawei.

And in Europe, where rules generally seem less onerous, it has landed new deals with Orange and Proximus in Belgium as well as T-Mobile and Orange in Poland.

The gains have come after market share setbacks in the US, where Nokia lost a 5G contract with Verizon to South Korea's Samsung, and China.

Those upsets followed high-profile 5G product difficulties: let down by an important supplier of semiconductors, subsequently identified by analysts as Intel, Nokia resorted to field programmable gate arrays (FPGAs), a tweakable but relatively expensive category of chips, for baseband processing and beamforming.

Under Uitto, who replaced Marc Rouanne as head of mobile in late 2018, Nokia has been phasing out the FPGAs, which accounted for just 18% of 5G shipments in the first quarter of this year.

Replacement "system-on-a-chip" products  designed in partnership with Broadcom, Intel and Marvell  have boosted profitability, and Uitto says 4G and 5G market share outside China has now stabilized at 26%.

Nokia has signed 35 5G contracts with entirely new customers and extended its presence with another 25 operators, he tells Light Reading.

While operators across most developed markets have now chosen their 5G partners, there are still huge opportunities in countries such as Brazil and Vietnam.

"The biggest one is India," said Uitto, pointing out that Nokia already has relationships with Bharti Airtel and Vodafone Idea.

"We have a chance not just to win in 5G but also take more share."

On a constant-currency basis, Nokia's mobile revenues fell 5% year-on-year in the first quarter, a drop the company blamed on component shortages.

But a phaseout of the FPGAs and other cost-saving measures lifted the operating margin to 7.5%, from 3.4% a year earlier. Nokia continues to guide for a full-year constant-currency increase of 4%.

Besides phasing out the FPGAs in its 5G products, Nokia has also injected more funds into research and development (R&D), spending on which had suffered under previous management.

Nokia has been cutting jobs in other departments to pay for the increase, with headcount falling from 98,322 employees in 2019 to 87,927 last year.

"We've ramped up radio R&D and headcount and today have more than doubled the R&D capacity in radio compared with 2019," said Uitto. "We're cutting into admin costs."

Additional savings might be realized from exiting Russia, where Nokia has previously employed about 800 people. That process will not happen overnight because Western governments want to avoid any risk that communications networks might fail on humanitarian grounds, according to Uitto.

"We don't make new contracts, take new purchase orders or deliver, but the EU and US wanted us to provide technology support to networks during the exit process."

Nokia last year generated about 2% of its sales in Russia and has historically done business with all four major operators  MegaFon, MTS, Rostelecom and VEON.

There have been some reports that other Western companies exiting Russia have had assets seized by local authorities, but the Finnish vendor has no major facilities in the country, said Uitto.

"We don't have the same problem as companies with factories or production there."