Nokia has cut 11,000 jobs in effort to boost profit

Unlike Swedish rival Ericsson, Nokia does not say how many people it employs in quarterly financials. For the past year, that concealed the full human cost of Nokia's efforts to slash about 500 million (US$597 million) off its yearly expenses. But the toll was made apparent today when the Finnish company published its latest annual report. After nearly 5,000 jobs disappeared from the total in 2019, more than 6,000 went last year.

The net reduction of 11,044 left Nokia with an average workforce of 92,039 employees in 2020 and means headcount has fallen by 11% in just two years. A regional breakdown shows that job numbers fell in all parts of the world, but the decline was steepest in China. Staff numbers there dropped 12% last year, to 13,749, and they are down by nearly 3,500 since 2018. 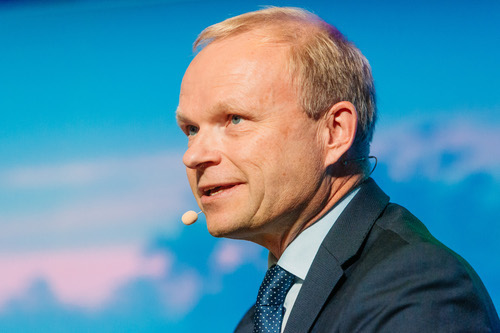 Nokia's Pekka Lundmark has a Herculean task ahead of him.

That is perhaps unsurprising. Around this time last year, Nokia quit China's market for 5G radio access network (RAN) products after failing to land any contracts with the country's operators. A local system rigged by the government has long ensured that Chinese vendors  principally Huawei and ZTE  pick up most of the network jobs. When it came to 5G RAN, the remaining 12% of business went entirely to Ericsson.

One question now is whether the Swedish government's recent decision to ban Huawei from its own 5G market could spell opportunity for Nokia. Beijing has already threatened retaliation against Swedish interests. Fearing the consequences, Ericsson CEO Börje Ekholm has become an unlikely ally of Huawei in Sweden, criticizing his government's disregard for normal free trade principles. "The Swedish telecom regulator's decision to exclude Chinese vendors from 5G networks may create exposure for our operations in China," warned Ericsson in its last earnings report. Nokia may be hoping Finland does not follow the Swedish example.

Its headcount has fallen sharply in the Americas, too, dropping 9% last year and by more than 2,800 roles since 2018. Failure to clinch a big 5G contract with Verizon seems unlikely to have had much bearing  news the operator had instead picked Samsung surfaced as recently as September. Nonetheless, a substantial share of jobs across both North and South America has vanished.

Nokia had little to say about cutbacks in the report. "Our workforce has fluctuated over recent years as we have introduced changes in our strategy to respond to our business targets and our activities," was the company's only real statement. For investors, the good news is that Nokia's operating profit margin almost doubled in 2020, to 4%, despite a 6% drop in sales, to roughly 21.9 billion ($26.1 billion). Two years ago, Nokia registered an operating loss of 59 million ($70 million). For 2020, it at least managed an 885 million ($1.1 billion) profit.

But that is not good enough for shareholders, especially when net losses have totaled more than 3 billion ($3.6 billion) in the last three years. After its own program of cuts, and the sale of some assets, Ericsson recorded an operating margin of 12% last year, up from 4.6% in 2019. Yet to publish its own accounts, Huawei boasted a margin of 9.1% in 2019. Having not measured up favorably, Nokia is targeting 7% to 10% this year.

The big concern is that Nokia's last savings program led to a substantial fall in spending on research and development (R&D). After investing about 4.5 billion ($5.4 billion) in R&D in 2019, Nokia cut its budget by almost 450 million ($540 million) last year. And investments are down from almost 4.8 billion ($5.7 billion) in 2018. Following slip-ups in the 5G market, shareholders worry about a loss of competitiveness. A shrinking budget does not look good when Ericsson's mobile-focused one rose 2% last year, to about $4.7 billion ($5.6 billion). Mobile, after all, is where Nokia generates nearly half its sales.

Pekka Lundmark, the company's newish boss, has promised a mobile revival, whatever the cost. In February, on a call with reporters, he expressed a "willingness to sacrifice margins to increase investments in R&D." His decision to place mobile access in a separate business unit will improve transparency and help investors to better assess its performance. It could also aid the sales strategy: Lundmark, unlike his predecessor Rajeev Suri, does not believe customers want to buy "end to end" (all products in one go from one vendor).

The signs point to further cutbacks under Lundmark. He has already slimmed down Nokia's bloated global leadership team from 17 to 11 managers. Restructuring plans mean 14,000 employees will move from corporate functions into the new business groups of mobile, network infrastructure, cloud services and licensing (Nokia Technologies). Combined with this year's profitability goal, that seems bound to mean layoffs.

An update on Lundmark's own savings targets is expected at Nokia's capital markets day later this month. "The new operational model is a great opportunity to look for cost efficiencies," he told Light Reading in February. "One of the goals is to identify places where we can improve cost efficiency." The challenge will be delivering cuts without harming competitiveness. And investors will have to exercise patience.