Nokia seems to have been hobbling in the 5G race ever since it suffered injury problems under previous management. While China's Huawei and Sweden's Ericsson have been happy to flaunt their specs, the Finnish company has spent a long time in quiet catch-up mode. But its latest product refresh could propel it into a winning position and give it something to shout about.

Led by Tommi Uitto, Nokia's mobile experts appear to have sat down with a list of the most important metrics  weight of radio unit, the bandwidth it can support etc.  and made sure they have a 5G product that, on paper, is either the best in the market or at least as good as anything that Nokia's rivals can offer. "We have been catching up lately but, depending on the aspect or characteristic of connectivity, we are either tied for number one or alone in the number one position," says Uitto.

It starts with a high-performance, "massive MIMO" radio unit that weighs just 17 kilograms in a so-called 32TRX configuration (meaning 32 transmitters and receivers). "What is fantastic about the new product platform is that it will put us in the lead in the weight of what is the highest-volume massive MIMO configuration across most of the markets in the world," says Uitto. 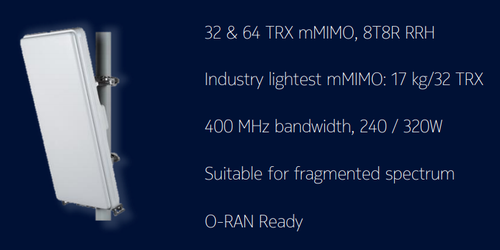 Back in February, Ericsson advertised a massive MIMO unit weighing about 20 kilograms, while Huawei talked up a 19-kilogram box just a week later. In both cases, however, those figures were for the 64TRX configuration. Their 32TRX units probably weigh less.

But on a like-for-like basis, it seems reasonable to assume Nokia is at least on a par with its rivals, and its 32TRX unit is well below the 25-kilogram threshold. That is important because of cost. Units that weigh more cannot easily be carried by a person and might even need hoisting into position by a crane, adding to the telco bill. Operators may also have to reinforce their masts to support any heavier equipment. And lightweight units are generally more energy-efficient, partly because additional cooling equipment is needed for bulkier products.

Not all chips are equal

The 17-kilogram achievement is partly a result of the work that Nokia has been doing with chip suppliers Broadcom, Intel and Marvell since last year. Its earlier mistake had been reliance on Intel as a single supplier. When Intel ran into manufacturing delays on customized chips, Nokia had to fall back on field programmable gate arrays (FPGAs) supplied by Xilinx. Those brought flexibility, but they have also been "power hungry," says Uitto.

Profit margins and product competitiveness suffered, partly  it seems  because the use of FPGAs is not conducive to making lightweight equipment. "FPGAs are flexible but they are more difficult to program and very power hungry, and when they are power hungry it means they emit a lot of heat and therefore the whole radio product becomes bigger," Uitto explains. "That is the challenge that new open RAN radio unit suppliers have in massive MIMO."

The challenge is not strictly about open RAN, whose new interfaces are designed to let operators use a mix of different vendor products at the same site. Indeed, Nokia insists its new product portfolio is "open RAN-ready" and that it would not have to compromise on performance when using the new interfaces.

Uitto's point is that smaller companies, without Nokia's resources, would struggle to develop the customized chips (ASICs) needed for lightweight, massive MIMO products. "Digital beamforming requires a lot of computing and so the difficulty for the new open RAN suppliers is how they do this beamforming," he says. "They have to use FPGA because they cannot afford to develop a custom ASIC like the bigger suppliers."

An important aspect of the Nokia turnaround has been a renewed commitment to R&D spending, which fell by nearly 450 million ($537 million) at the company last year, to about 4.1 billion ($4.9 billion), as competitors either maintained or increased their investments. Although Nokia claims to have boosted R&D spending in the 5G area, newish CEO Pekka Lundmark aims to lop another 600 million ($717 million) off annual costs by 2023 so that he can pump additional funds into R&D without hurting profitability.

Nokia's current budget is clearly more than most organizations can muster (although smaller open RAN players such as Benetel, an Irish maker of radio units, aim to be competitive through their own silicon partnerships). But the chunk spent on 5G has not been used solely for weight reduction.

Nokia also says the new radio units can operate across a wider bandwidth range (so-called instantaneous bandwidth or IBW) and support more of it (occupied bandwidth or OBW). It boasts IBW of 400MHz and OBW of 200MHz and says it has done that without having to make changes to power output, meaning it can offer configurations of 240 watts and 320 watts.

"The stats around weight, power, IBW and OBW are as competitive as any other product I've seen," says Gabriel Brown, a principal analyst with Heavy Reading (a sister company to Light Reading). "On paper, it is highly competitive."

Operators that either lack contiguous spectrum or share equipment with competitors seem bound to value the latest offering. They include service providers in the UK whose spectrum holdings are now in different parts of the mid-band frequency range, even after some recent trading activity in the market.

Pump up the baseband

Nokia also now claims market-leading features on the baseband hardware side. A new unit can support up to 90,000 connected users and 288 cells, providing overall throughput of 84 Gbit/s. And the design of the architecture means there are separate plug-in units for Layer 1 and 2 processing, giving Nokia an important advantage over Ericsson, says Uitto.

"The computing needs of Layer 1 and 2 processing are growing faster than the computing needs of Layer 3 and transport," he explains. "It makes sense to keep those plug-in units separate rather than having everything in the same pizza box, like Ericsson has in its old Baseband 6630 or new Baseband 6648 products." Operators using those Ericsson systems are forced to spend money on Layer 3 and transport capacity that is not really needed, according to Uitto.

Baseband units are already shipping to pilot customers who are "extremely happy" with the performance, he says, and the new radio platforms will become available later this year. Henceforth, Nokia's customers will be able to run all the different generations of mobile technology on a single radio access network platform, with common transport, network operations and software delivery. "They share the same hardware, which was not the case in the past because we had to introduce 5G based on FPGA technology," says Uitto.

The real proof of newfound competitiveness will come when commercial networks are up and running, but Heavy Reading's Brown sounds impressed and says the new product portfolio has arrived at an opportune moment. "It is ready for US C-band deployments and well-timed from that point of view."

In a market that now features such a limited number of suppliers, operators may be relieved at the merest hint of a Nokia resurgence. "The industry needs Nokia to be really competitive," says Brown. "This isn't just about Nokia." For Huawei, Ericsson and Samsung, life in the 5G sector seems about to get tougher.