Regular updates on 5G's value have become as certain as the daily news headlines about COVID-19's economic demolition job. The latest comes from Nokia, which today published a report predicting, among other things, that 5G will add $8 trillion to global GDP in 2030.

When they come from a source with vested 5G interests, these studies are always either political or promotional.

China's Huawei previously sponsored a few that warned of digital dismay for Britain if the authorities were to ban it (they did anyway).

Huawei's big rivals, meanwhile, are increasingly desperate to justify a technology that may keep them in business between now and the arrival of 6G in the late 2020s.

Many onlookers remain unconvinced. To some of its detractors, 5G is no kind of revolution but merely a connectivity improvement on 4G. Others acknowledge its sophistication but think it lacks an obvious, modern-day role  as if a software engineer were dumped into a primitive agrarian society.

Those skeptics now seem to include Huawei, whose 5G business is suddenly threatened by US trade sanctions and geopolitical rifts.

"In fact, human societies do not have an urgent need for 5G," said Ren Zhengfei, Huawei's founder, according to a recent report. "What people need now is broadband, and the main content of 5G is not broadband."

Nokia's $8 trillion figure grabs the attention largely because trillion is such a mind-boggling number.

It also represents a sizeable contribution to global GDP. Last year, in nominal terms, that was about $87 trillion. According to Nokia's report, $8 trillion will represent a 7% contribution to the figure in 2030. It has been calculated by experts at Bells Labs Consulting, a Nokia research unit whose employees include people with Jupiter-sized brains.

Clearly, though, Nokia and Bell Labs would have started with the assumption that 5G genuinely matters. 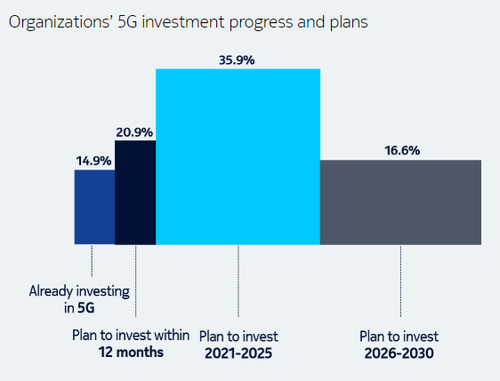 Their calculations have probably discounted the worst-case scenario for 5G  that, despite becoming the default standard for smartphone services in the next few years, it fails to produce a 5G equivalent to Uber, perhaps the clearest example of a company that could not exist without 4G, and has only a modest impact in the business sector.

An interesting question, which the report does not appear to consider, is what mobile's GDP contribution would be if the world skipped 5G and waited for 6G.

The difference between this figure and mobile's total contribution in a 5G world is likely to be smaller than 7% of 2030 GDP.

Even 5G's enthusiasts acknowledge that many of the services aimed at industries can be delivered using 4G  5G simply brings greater efficiency and security.

In the market for private business networks, all but 30 of Nokia's 180 customers were using pre-5G technologies in July.

Quite possibly, the longer signaling delay that comes with 4G rules it out for some whizzy new industrial applications. Similarly, 4G systems that lack 5G levels of automation might struggle to cope with tens of billions of connected factory sensors.

Yet 5G equipment vendors have failed to conceptualize many examples of latency-sensitive applications.

As for the ballyhooed "Internet of Things," that was now supposed to include about 50 billion connected objects, according to forecasts made by Cisco and Ericsson in 2010. Ericsson's last mobility report, for June, identified fewer than 11 billion.

The longer the wait for those breakthroughs, the less impact 5G will have between now and 2030.

No doubt, 5G has a hard act to follow. Its predecessor is rightly seen as one of the most successful mobile communications technologies so far.

Despite this, 4G's economic contribution in the advanced US market alone was considerably less than 7% of GDP last year, according to a study commissioned by the Cellular Telecommunications Industry Association. The figure cited in that report is $700 billion, equal to about 3.3% of US GDP in 2019.

If countries are to stand any chance of realizing much greater benefits, they will have to do more than just invest in 5G infrastructure.

Despite disruption caused by government moves against Huawei, the UK came a creditable seventh out of 22 countries in a recent 5G progress ranking by Omdia. Finland and Germany also performed reasonably well, coming eighth and tenth respectively.

Yet just 4% of UK companies, 2% of Finnish and 3% of German ones are what Nokia calls "5G mature." In Saudi Arabia, missing from Omdia's study but not commonly thought of as a global 5G leader, that percentage rises to 13%, says Nokia's report.

"We wanted to understand who is piloting and engaging and trying to understand performance, what 5G brings in terms of connectivity and how you translate that into particular use cases," said Gabriela Styf Sjöman, Nokia's chief strategy officer, in explaining the conclusions to Light Reading.

"This is where Saudi Arabia sticks out. There are lots of pilots and there is engagement from the government."