MWC22  At a gathering of millimeter wave (mmWave) 5G advocates held on day three of MWC Barcelona, a surprisingly modest picture emerged of the technology's future role in the 5G buildout.

The two-hour mmWave 5G Summit staged last week featured a worldwide cast of characters citing lessons learned in putting mmWave into service. The combined takeaway: mmWave deployment must be surgical, not a surge.

"One smartphone out of five at the end of 2023 will be millimeter-wave enabled," he said, adding that this would equate to nearly universal mmWave compatibility among the premium user base.

Poggianti did not discuss one reason why mmWave's penetration isn't higher  the extra cost to add mmWave support, including dedicated antenna hardware  although Qualcomm execs have said before that they expect increasing sales volumes to bring down that expense.

At MWC, vendors showed no rush to adopt mmWave, especially in non-US markets. For example, TCL's newly announced TCL 30 5G phone, launching in Europe in April, only does sub-6GHz 5G. And while MediaTek's upcoming flagship Dimensity 9000 chipset will include a mmWave-capable modem, that feature will not be enabled in the launch version, MediaTek VP Pascal Lemasson said.

In a separate presentation, Stephen Rose of Nokia's Bell Labs Consulting made the same point: "It cannot be that they have to do a speeds and feeds test on their own device before they're aware of that." 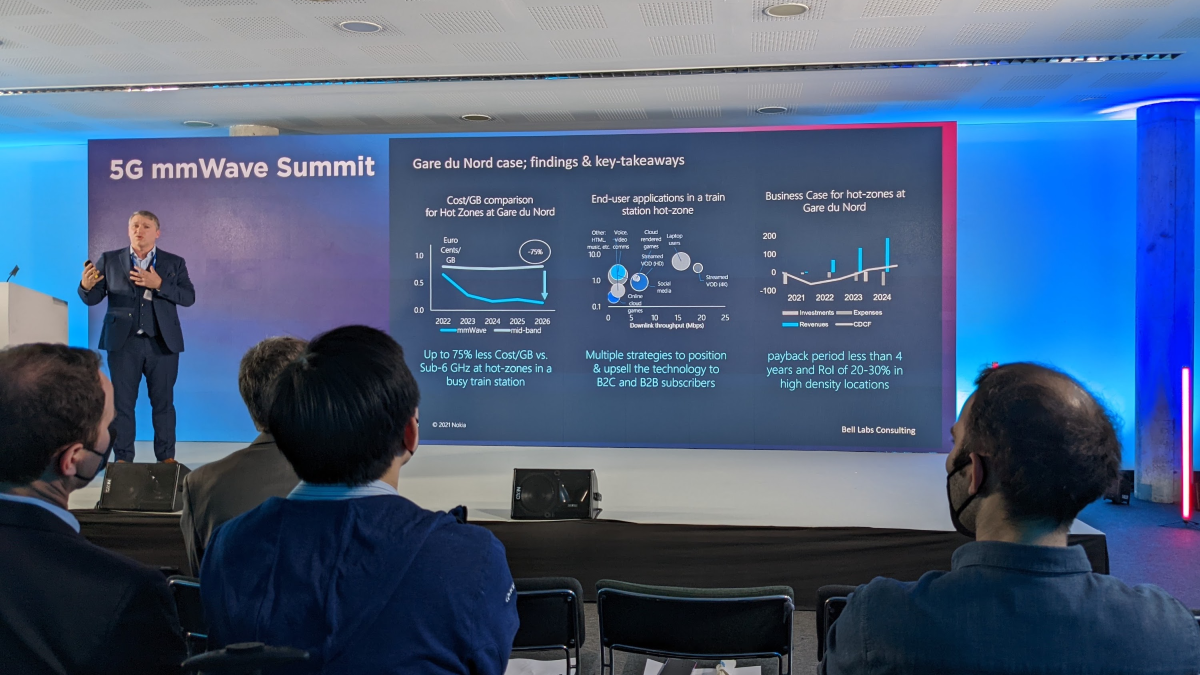 So what should a mmWave-enhanced experience look like? Brian Mecum, VP of device technology at Verizon, cited the carrier's work to make SoFi Stadium in Los Angeles ready for Super Bowl crowds. "We put over 150 5G millimeter-wave antennas inside this facility," he said, explaining that the network supported experiences including streaming video of the halftime show through multiple camera angles.

Mecum also touted the "multiview" feature of the NFL's app, which on Verizon mmWave can show seven simultaneous streams of 1080p video. On lesser bandwidth, it can only handle five streams of 720p video.

Multiple speakers attested to the importance of identifying high-traffic venues that can benefit most from mmWave's higher capacity. That extra capacity is significant, according to Signals Research Group president and founder Mike Thelander. He said mmWave 5G provides 4.4 times the capacity of midband 5G.

Telstra found one such venue in the Melbourne Cricket Ground, a 100,000-seat stadium that's the largest in the Southern Hemisphere.

"It was impossible to provide the quality of customer experience in the stadium without millimeter-wave," said Iskra Nikolova, a network and infrastructure executive at the Australian carrier. Deploying it allows for download speeds of 2 to 3 Gbit/s, although she added that "it has been quite complex to engineer."

The return on investment

Much of that, he said, requires knowing the potential user density of a mmWave zone.

"There's a range of about a thousand to 3,000 subscribers per hot zone, and that was the sweet spot," he said. "If you go lower than 1,000, then naturally you have a far less attractive business case."

He cited a case study of deploying mmWave at the Gare du Nord in Paris that found deploying mmWave 5G in that train station yielded per-gigabyte costs up to 75% less than those of sub-6 5G, with a payback period on that investment of less than four years.

Focusing mmWave 5G deployment on discrete and highly-trafficked locations  speakers also cited airports, convention centers and city squares  gets around its range limitations, but carriers are working to expand on that as well in some contexts.

Nikolova said Telstra has been making extensive use of repeaters to densify its mmWave coverage in Australian central business districts. But he critiqued mainstream network-hardware vendors for neglecting that market: "The portfolio is not as rich in terms of repeaters."

Peter Moberg, head of massive MIMO radios at Ericsson, said the company has been able to sustain gigabit speeds over as much as seven kilometers for fixed-wireless residential broadband users by deploying high-powered hardware at both ends.

Finally, speakers pointed to one mmWave use case that doesn't require customers to buy new handsets at all but does allow for more precise network construction: backhaul for other services. Yang Shen, senior solution architect at ZTE, said mmWave 5G backhaul would work well for providing connectivity for individual villages and islands as well as on subway systems.

A separate presentation unpacked how a Samsung-built mmWave 5G network boosted download speeds in trains in Seoul's metro system from an average of 71.05 Mbit/s, judged "poor" compared to in-station downloads of 367.24 Mbit/s, to 600 to 800 Mbit/s. The catch, unsaid at this meeting: Because trains relay this bandwidth to passengers via Wi-Fi, this deployment by itself won't sell a single mmWave-enabled handset.