It looks like Verizon accidentally bought $1.5M worth of 2.5GHz spectrum

Verizon purchased a handful of 2.5GHz spectrum licenses scattered around the US for a total of $1.5 million in the FCC's recent auction. Analysts are calling it an accident.

"This 2.5GHz spectrum will be useless to Verizon; the company actually tried to dump all of their bids, but got stuck as the final bidder for the licenses they won," wrote the financial analysts at New Street Research in a note to investors. Verizon currently does not widely use 2.5GHz spectrum in its wireless network.

The New Street analysts noted that Verizon paid a $20 million deposit to participate in the 2.5GHz auction, which was far more than the $1,000 that AT&T paid and the $25,000 that Dish paid (neither AT&T nor Dish won any licenses). T-Mobile, for its part, made a $65 million deposit and ended up walking away with the vast majority of the spectrum licenses in the auction. The 2.5GHz band sits at the core of T-Mobile's 5G network.

So what was Verizon doing in the 2.5GHz auction? "They were clearly trying to drive the price up for T-Mobile," the New Street analysts wrote.

"Verizon ended up with just 12 licenses across 9 counties where it probably could not get out of," wrote Sasha Javid, chief operating officer for BitPath, on LinkedIn. Javid has closely tracked previous FCC auctions, and maintains a detailed website for the agency's Auction 108 of 2.5GHz spectrum. "Maybe one day, someone will explain what Verizon's strategy was in this auction. My suspicion is that they realized early that they could be stuck with unwanted licenses so their goal of driving up prices for T-Mobile was too risky."

According to Javid's website, Verizon's 2.5GHz winnings are seemingly scattered across the country at random in locations in Arizona, Oklahoma, Kentucky and elsewhere. 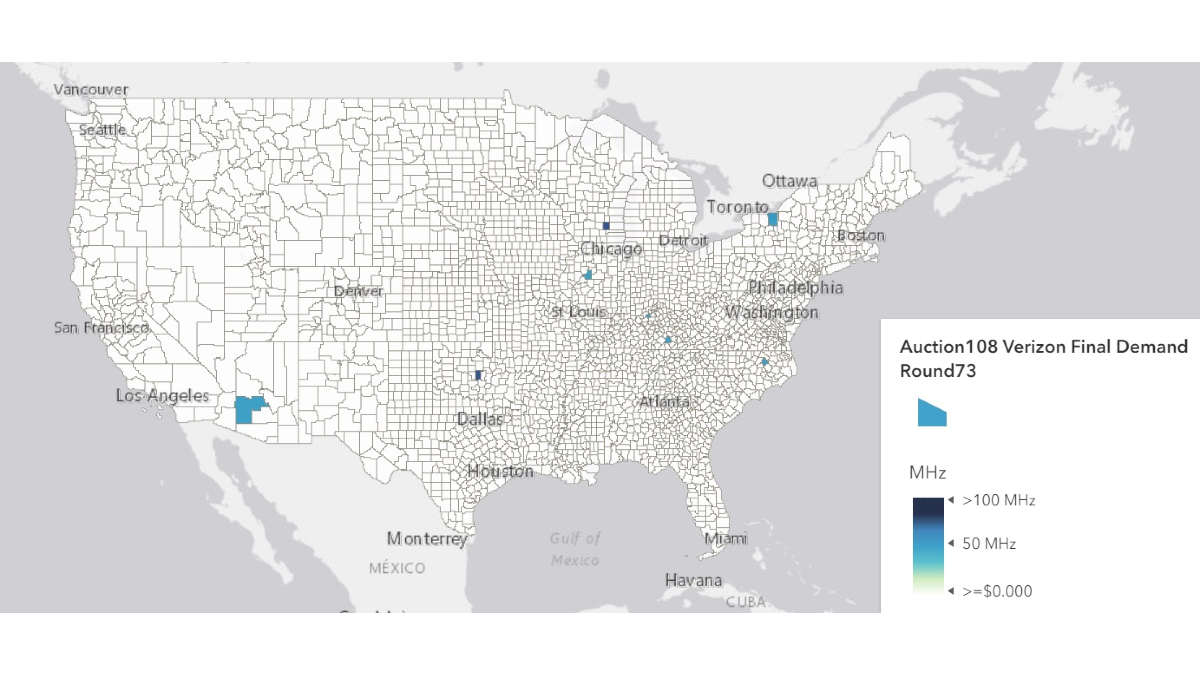 Verizon purchased a handful of spectrum licenses scattered around the country in the FCC's recent 2.5GHz spectrum auction. Click here for a larger version of this image.
(Source: Sasha Javid. Used with permission.)

A Verizon representative did not immediately respond to questions from Light Reading about the operator's winnings. Verizon and other 2.5GHz auction participants are prohibited by the FCC from discussing the auction until later this month in order to avoid collusion.

If Verizon did intend to bid up prices in the auction, it wasn't successful. The auction ended earlier this week with a total of $428 million in winning bids, which was far less than analyst expectations ranging from $1 billion to $5 billion. T-Mobile accounted for 71% of all spending in the FCC's auction, and acquired 90% of all the licenses sold in the event. T-Mobile will undoubtedly use its auction winnings to expand the rural growth strategy it laid out in recent years.

T-Mobile, for its part, is in the midst of a massive 5G network buildout using mainly 2.5GHz and 600MHz spectrum bands. Verizon's own 5G buildout is primarily focused on the $50 billion worth of C-band spectrum it purchased in another recent FCC spectrum auction. AT&T and Verizon bid heavily against each other in that auction.