Is the sun finally starting to shine on 5G?

The 5G industry has had a dark, rough few years.

Early networks, particularly in the US, weren't much faster than 4G. And those few 5G networks in the US that were actually faster than 4G were only available to a tiny slice of the country's population. Further, there are still no major 5G services that aren't already widely available on 4G or Wi-Fi. As analyst Roger Entner of Recon Analytics often points out, the "killer app" for 5G right now is Speed Test.

Consumers, at least according to one survey, aren't having it. The financial analysts at Morgan Stanley surveyed 3,500 broadband customers and found that only 4% of respondents said they would switch carriers to access new technologies like 5G. 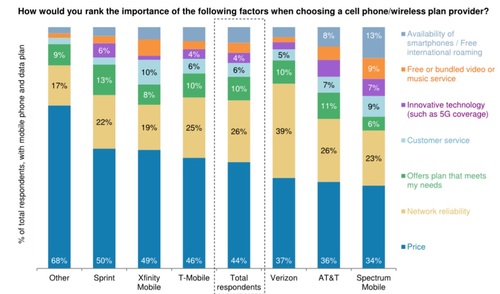 Results from a Morgan Stanely survey show little interest in "innovative technology" like 5G. Click here for a larger version of this image.
(Source: Morgan Stanley)

Likely in response, most operators decided against charging extra for 5G connections. And that, in turn, spooked investors hoping for some kind of revenue boost from operators' 5G investments.

Perhaps it's no surprise that some Finnish researchers are warning that 5G technology won't actually mature until the year 2027.

But there are some new indications that 5G might actually be turning a corner.

"It's been a profitable business," said Kimmo Pentikäinen, VP of business development for Finnish 5G operator Elisa, during a recent Light Reading event. In its most recent financial report, the operator reported a gain of $3.50 per month per customer from 5G.

Elisa covers around 60% of Finland's population with 5G. According to Speed Test provider Ookla, Elisa offered median 5G speeds of 231 Mbit/s in the third quarter of 2021. And Pentikäinen said Finnish mobile customers consume more than 20 GB of data per month  far more than most other mobile customers around the world.

"It's the perfect place to find out how to create value in 5G," he explained.

So where is that value?

"You can only understand it by doing it," Pentikäinen noted. He said Elisa has been working to offer a wide range of 5G-powered services. Specifically, he said the operator has explored offering live, 4K video uploading services, which can be used by parents to stream their children's soccer match to grandparents. The operator has also offered 5G-controlled robots, allowing nurses to visit COVID-19 patients without having to physically visit their rooms. Another application: Remote controlled machines that can, for example, transport suspicious airport packages to safe locations for investigation.

"That's what 5G can already do now," he said, noting there are "plenty of new opportunities."

Elisa isn't the only company cheering its early push into 5G. The financial analysts at New Street Research recently published a report on 5G in South Korea, and found plenty of sunshine there too.

"Despite almost three years since the 5G launch, demand for 5G continues unabated," they wrote. The analysts said that Korean operators' average revenues have grown 4% over that time, "highlighting the attractiveness of the market, but also reflecting the strong 5G proposition for markets globally."

Specifically, the analysts reported that 5G drives much higher usage among consumers. They found that Korea's 5G subscribers chew through 25GB per month, or roughly 2.5x the amount of data the country's 4G customers consume. That, they said, indicates demand for faster networks.

"Despite fears that the operators will step up marketing spend to drive 5G take-up, the actual outcome has been the opposite," the analysts concluded. "EBITDA [earnings before interest, taxes, depreciation, and amortization] growth ... has accelerated sharply post 5G launch, and at 8% is now the highest since 2014 levels."

And there are indications that the same kinds of trends are headed to other markets including the US. For example, according to a survey of 1,000 Americans by the financial analysts at Cowen, data usage in the US is reaching record levels. 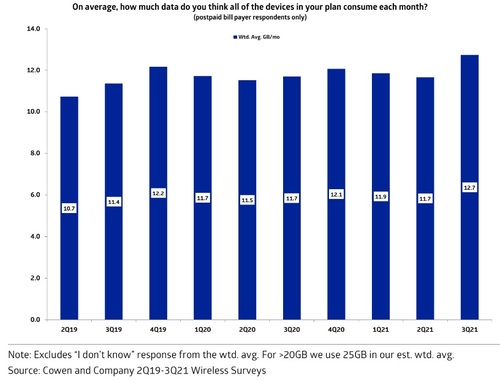 Results of a Cowen survey show US mobile customers are chewing through record amounts of data. Click here for a larger version of this image.
(Source: Cowen)

Further, the firm reported that customers on unlimited mobile data plans consume roughly twice as much data as customers on usage-based plans. "The push toward unlimited plans is an important story across the industry for service revenue growth," they noted.

Those findings dovetail with new numbers from T-Mobile. The company reported recently that subscribers of its most expensive unlimited data plans consumed an average of 35 GB of data per month.

Those figures are important because T-Mobile, Verizon and AT&T all have basically the same 5G business model: to get their existing customers to upgrade to "premium" unlimited data plans. Such plans typically offer the speediest connections and the fewest usage limits, caps and caveats.

"That's the model that is driving the real accelerated value proposition inside the base, and is the core of our confidence of our growth around our service revenues," he said at the time.

And that's just the start of operators' overall 5G business strategies. Some, like T-Mobile, are encouraging developers to design new 5G applications for the retail environment. Others, like Verizon, are hoping businesses invest in private 5G networks and edge computing services.

While these kinds of offerings are largely untested, they certainly represent additional 5G opportunities.

"The result is 5G being extremely positive for FCF [free cash flow] generation and therefore shareholder returns," argued the New Street Research analysts of their findings from South Korea.

3GPP Release 17: Completing the First Phase of 5G Evolution
How will Sidelink Bring a New Level of 5G Versatility?
Setting off the 5G Advanced Evolution
Scaling 5G IoT with NR-Light
AI/ML for the 5G RAN
More Blogs from DanoVision
Could 5G ruin the night sky?