LAS VEGAS  This year's Consumer Electronics Show (CES) here was... something. I've been attending the show on and off for more than a decade now, and it never fails to provide a, ah, unique experience. This year was no different.

But this year's show was noteworthy for a number of reasons beyond the flashy TVs and weird little robots on the show floor. It felt like the first real, big trade show for the tech industry since the COVID-19 pandemic. This year's CES halls were packed. Getting in and out of the venue was difficult. I heard attendees speaking in languages from all over the world. I'd guess around 5-10% of attendees wore masks.

CES organizers estimated that they'd attract around 100,000 attendees. It certainly felt like there were that many people in the Las Vegas Convention Center, at least on the first day of the show. And though 100,000 is well down from the show's pre-pandemic high point of around 170,000 attendees, it's at least approaching normal. That bodes well for the MWC show in Barcelona next month.

But what about 5G? It was a major theme at CES in 2018 and 2019, just prior to the pandemic. Now that there are an estimated 1 billion 5G users around the world, has the technology matured from hype into substance?

The answer is: Yes and no.

From Bluetooth to 4G

In my search for 5G at CES, my first stop was North Hall. Among the many firms exhibiting there were medical supply companies offering everything from wireless heart monitors to light-up helmets that are supposed to prevent hair loss.

I swung past a smaller, uncrowded booth from CSEM, a Swiss operation focusing on wearables. 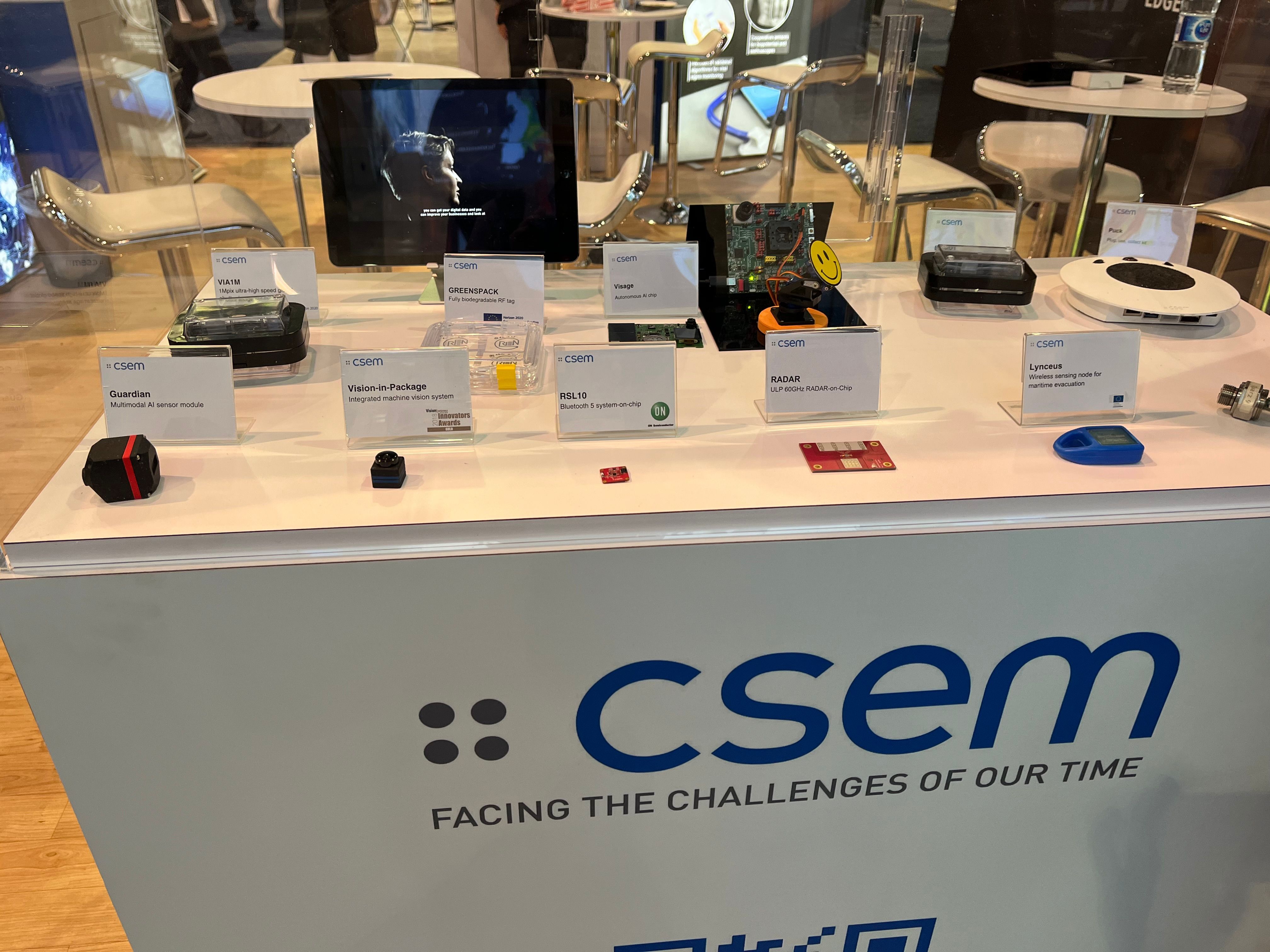 "Do you have anything that connects to 5G?" I asked. "Not really," was the answer. Most of the firm's gadgets use Wi-Fi and Bluetooth, but one was designed with the intention of using 5G at some point in the future. It was not on display. I moved on.

Also in that same hall was AT&T's booth, which focused on the company's Internet of things (IoT) business. There I spoke with Tad Reynes, AT&T's global director for IoT healthcare solutions. He agreed that it's still early days for 5G in the IoT world, and that the vast majority of AT&T's business in the healthcare IoT space runs on the operator's 4G networks, including the NB-IoT and LTE M networks that are specifically designed for slow-speed IoT services. But he said he expects that to change as the cost of 5G modules inevitably falls.

For 5G, my search continued.

The West Hall was full of all kinds of vehicles of all shapes and sizes. At the entrance was a booth from Applied EV, an Australian company that builds modular vehicles for autonomous driving. One of the company's prototypes looked like a regular car with the top cut off and a big robot arm installed instead. 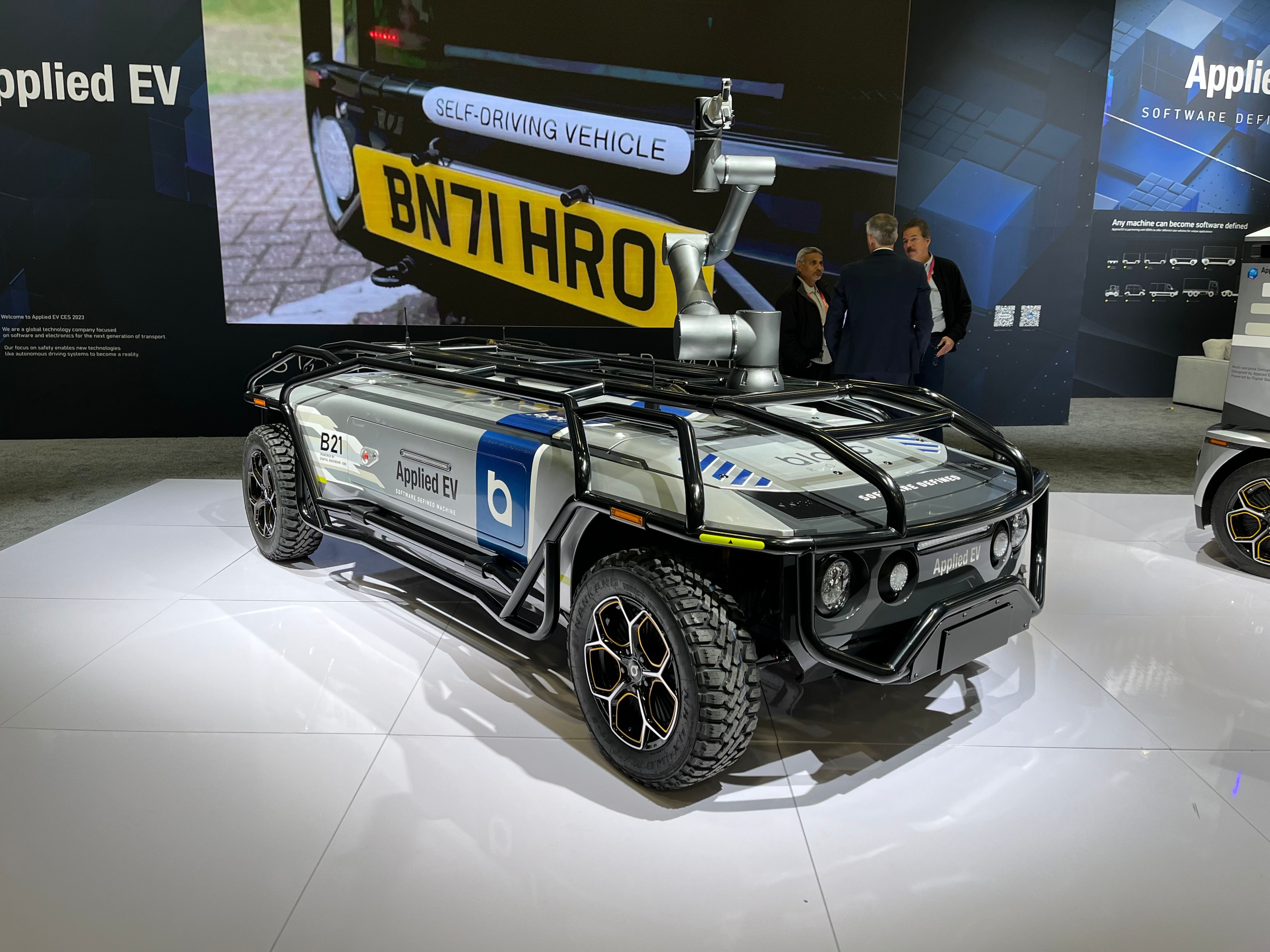 It was not scary at all.

Yet another smart car company, Asahi Kasei, showed off a prototype autonomous vehicle that looked exactly like something out of The Jetsons. 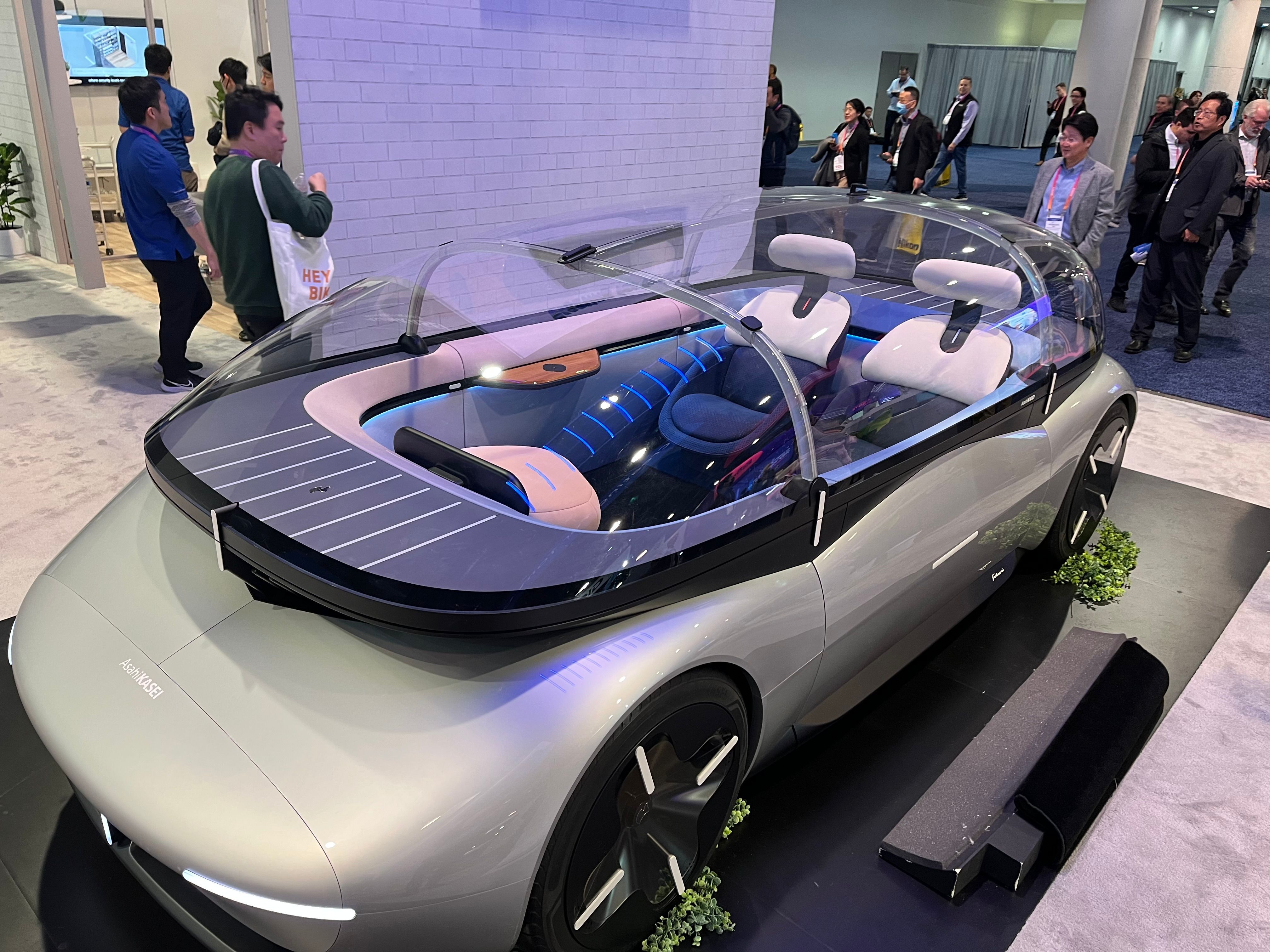 However, there are no indications that such autonomous vehicles will hit the pavement in a widespread way anytime soon. Indeed, companies involved in the space have begun warning that fully autonomous vehicles appear to be much harder to develop than many expected just a few years ago. Broadly, the technologies involved in allowing computers to navigate city streets safely are simply not yet mature, regardless of whether they're connected with 5G or not.

Perhaps the clearest example of this is the new Las Vegas Loop, a series of underground tunnels dug by Elon Musk's Boring Company. The Loop was in full operation during CES, allowing show attendees to ride inside Tesla cars from one side of the convention center complex to the other inside a narrow, well-lit tunnel. 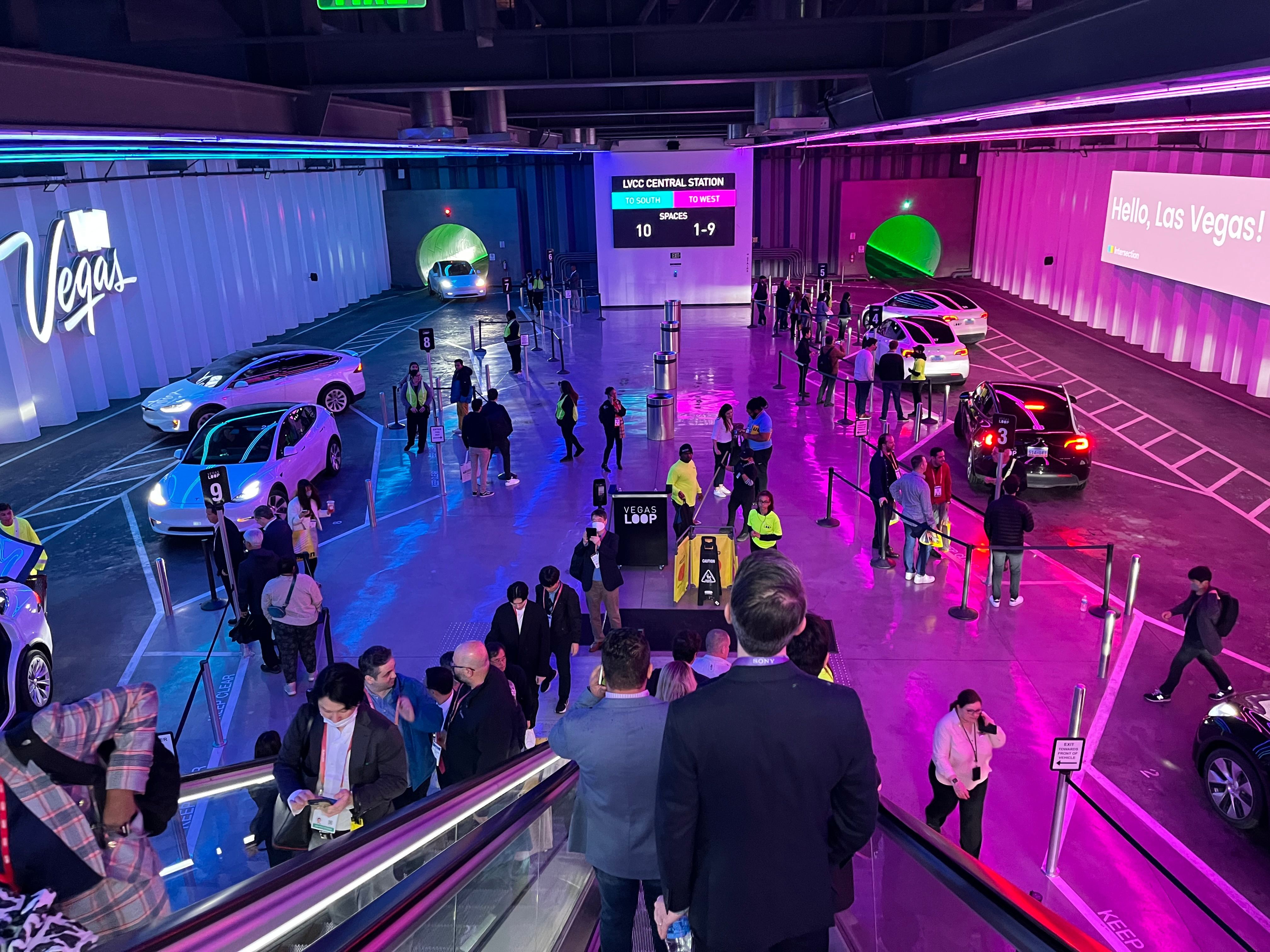 I took the Loop from the North Hall to the West Hall, and it did exactly as advertised: I rode in a Tesla through a tunnel to my destination. However, the whole process was decidedly manual: An attendant asked me where I wanted to go, and a friendly Las Vegas resident drove me and several other attendees in a Tesla to the West Hall. There were no autonomous robot drivers, or 5G, in sight. I did have trouble figuring out how to open the Tesla door, though (you have to push the button).

A major theme at this year's CES was virtual reality (VR) and augmented reality (AR), and the headsets that can provide such experiences. As noted by the analysts at CCS Insight, companies making news on the topic this year ranged from TCL to HTC to Sony.

"The biggest VR story ... was confirmation that Sony's PlayStation VR2 headset will arrive in February 2023 with more than 30 games on track for the launch window including Gran Turismo and Beat Saber, which is coming to the platform for the first time," according to the CCS analysts.

Not surprisingly, the CES show floor was awash in all kinds of glasses, headsets and goggles. 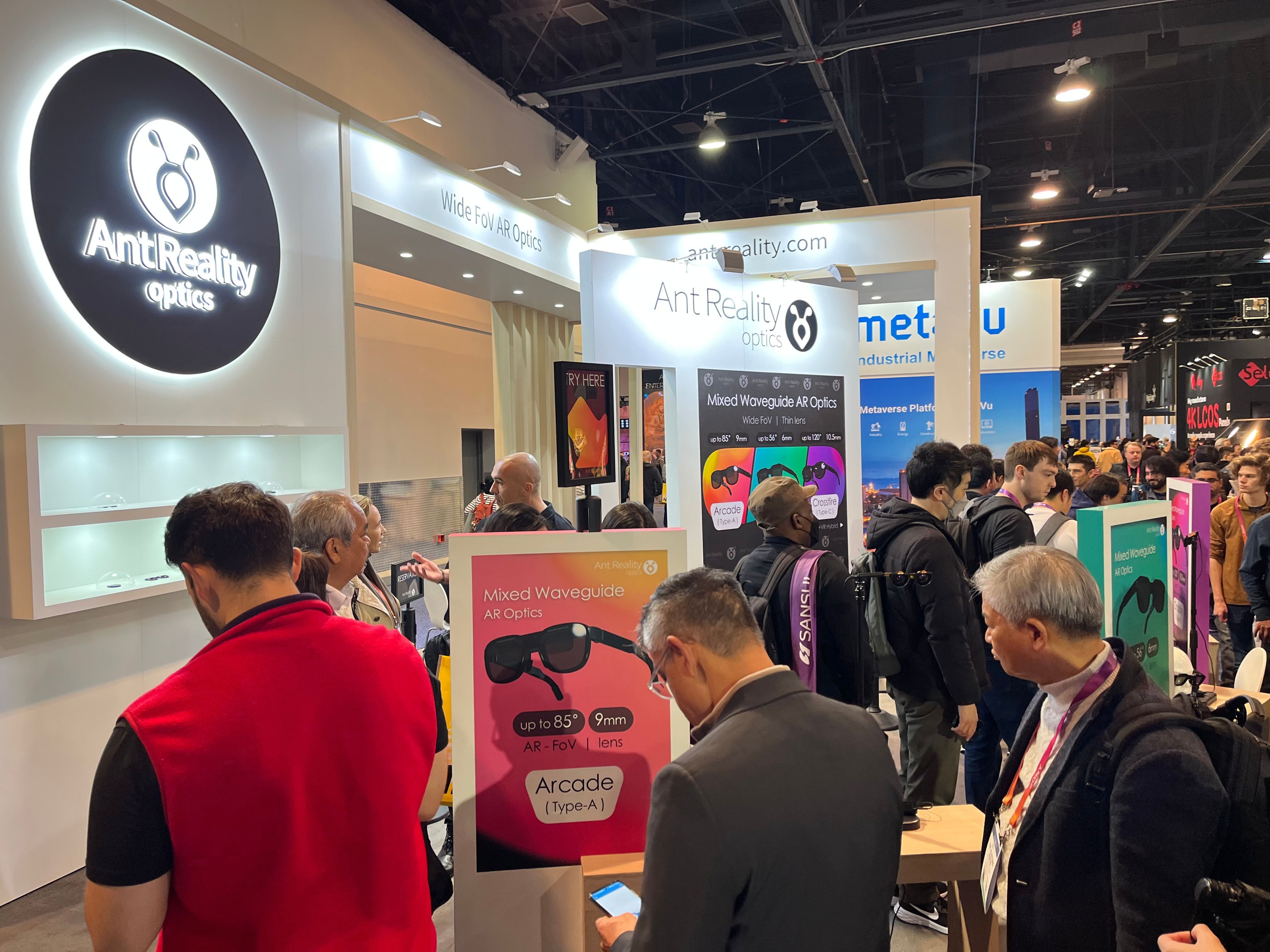 However, most such gadgets rely on wired, or Wi-Fi, connections. 5G remains too expensive, and too power hungry, for such gadgets. After all, they're primarily used in the home rather than outdoors.

However, I spoke to Dan O'Brien, the president of HTC Americas, about the company's new Vive XR Elite headset announced at the show. He explained that the Elite is lighter and better than its predecessors, and that it can also display both full VR experiences as well as AR ones that mix digital elements alongside real objects in a user's field of view.

O'Brien told me that the Elite doesn't sport 5G but that "we think headsets of the future will be 5G-enabled." Along those lines, he said HTC is testing the necessary edge computing and connectivity technologies with companies like Lumen Technologies and Dish Network that could support VR and AR experiences outside the home. Further, he suggested such technologies would be necessary to stream content directly to lightweight VR and AR glasses, which he said is the goal that HTC has been working toward for several years now.

"The smartphone is [eventually] going to go away," he predicted.

To be clear, there were plenty of 5G gadgets on the CES show floor. For example, Samsung and TCL both announced new 5G smartphones at the event.

But such gadgets aren't really that exciting considering 5G was inside roughly half of all smartphones shipped worldwide in 2022, according to research firm IDC. The outfit expects that figure to rise to 80% by 2026.

What I was really looking for were indications that 5G can support new and innovative business models. Faster smartphone speeds are nice, but what about the "fourth industrial revolution" promised to us at the outset of the 5G era?

I did find one interesting hint that this might be happening. Verizon and Razer finally took the wraps off their new 5G-powered Edge handheld gaming gadget, which officially goes on sale later this month. 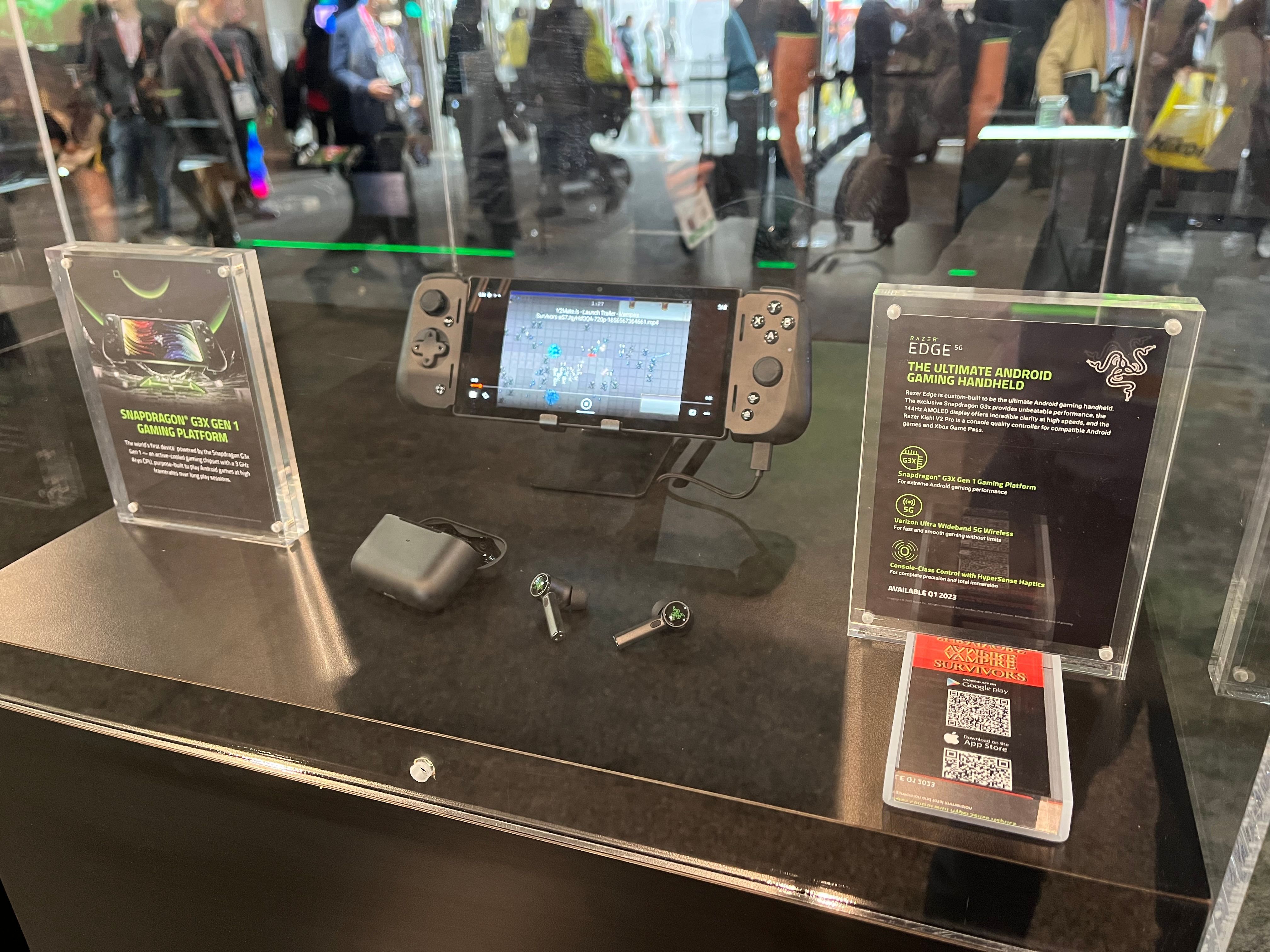 According to Cnet, the gadget isn't cheap. The Wi-Fi-only version of the Edge runs around $400, but the 5G version costs up to $600, and that doesn't include the $30 per month service existing Verizon customers will have to cough up. That service provides unlimited high-speed data over Verizon's "Ultra Wideband" 5G network and 30GB of high-speed data on Verizon's 5G and 4G LTE networks.

To be clear, Verizon is offering some discounts and promotions to bring the Edge price down to around $360 (or $10 a month across 36 months). But the company's 5G service pricing  which mirrors its pricing for tablets  isn't nearly as aggressive as the pricing the company has applied to its fixed wireless access (FWA) strategy.

Regardless, the 5G Razer is important because it's designed to support cloud gaming services like Xbox Cloud Gaming, Nvidia GeForce Now and Steam Link. Meaning, it streams fast-twitch video games over a wireless network, which is exactly the kind of speedy offerings that 5G's inventors envisioned when they released the initial specifications for the networking technology roughly five years ago.

Is the Razer the savior of 5G? Of course not. But it's another step in the right direction. And it's probably not the last step.