Open radio access network systems might be hot stuff for an increasing number of mobile network operators, but for Huawei they're a distraction for the industry that will only slow down market developments, according to Ryan Ding, the Chinese vendor's carrier networks business group president.

While in London for what would have been a pre-MWC showcase (but which evolved into more of a wide-ranging update on 5G developments), Ding and some of his colleagues took time away from the presentation stage to answer media questions about a variety of topics, including open RAN and supply chain developments.

It's very clear that Huawei is no fan of alternative mobile infrastructure options such as those proposed by the open RAN community. When answering questions about the potential of open RAN technology and its growing support among major network operators, Ding and his team made every effort to steer the conversation back to Huawei's portfolio. "There are lots of concepts  we know the requirements," said the carrier group president, suggesting that any developments that deviate from 3GPP specifications will only add complexity and inefficiencies for mobile operators.

Ding and his colleagues say they're talking to operators about all their requirements, including those related to open RAN, claiming that Huawei already has the products that can meet all their needs. They even claim to "welcome new entrants" that are "beneficial to innovation," and offer to work with such companies on R&D and interoperability.

But such comments ignore the very reasons why major network operators such as Vodafone, Telefónica, Etisalat and more are embracing open RAN  they want to break free from their over-reliance on Huawei, Ericsson and Nokia, the trio that currently dominates the mobile access network market with a combined market share of about 80%. The operators want alternatives and they're spending more time, money and energy on exploring those alternatives: Such moves can only erode the grip that the major vendors have on the industry, so it's no surprise that Huawei isn't exactly supportive.

Ericsson and Nokia are in the same position as Huawei, but have taken a different approach by joining the O-RAN Alliance, the operator-backed industry group that is advocating alternative RAN models based on disaggregated, multivendor systems. Of the two Nordic vendors, Ericsson seems more reticent about its involvement and is vocal about the (widely recognized) current shortcomings of open RAN architectures, but acknowledges that the market is shifting and that it will likely need to support a broader range of customer demands in years to come.

Might Huawei eventually cave in and join the O-RAN Alliance? Despite Huawei's position, Ding isn't currently ruling it out completely. "Let's see," he said, when pressed on the matter.

Whether Huawei would be a welcome member of the alliance and regarded as anything other than a wolf in sheep's clothing is another matter. 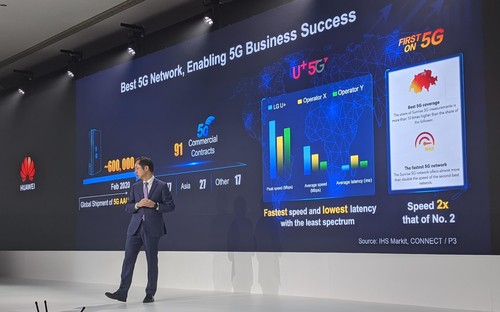 Supply chain challenges
Huawei has had more than its fair share of supply chain challenges in the past 18 months, with the recent spread of the new coronavirus, COVID-19, and its impact on industrial productivity in China, only adding to the pressures wrought by US trade restrictions that have cut off some of Huawei's component supply lines.

Ding claims the impact of the coronavirus has been very limited: Huawei's own factories in China have reopened, most supplier factories are back in action and inventory levels have been sufficient to avoid issues in terms of meeting customer demand.

The impact of the US trade restrictions has been greater. Ding said that with far less access to US-made components, Huawei has turned to alternative suppliers from Europe, Japan, South Korea and China, as well as ramping up its own in-house component production. An example of the latter is Huawei's new 800G optical chipset, the OptiXtreme H7, which is based on technology developed by Huawei's own component subsidiary, HiSilicon.

But he stressed that some US component manufacturers are still allowed to supply Huawei with their products and that some GPON systems for FTTH deployments are still built using only components sourced from US companies even though alternatives are available from other suppliers.

So just how much impact has the US clampdown had on Huawei's operations and processes? Can it be quantified? Ding said he's not authorized to comment on the precise impact it has had on the vendor, but admitted "the change has been quite big."

For more on these topics, see: