LONDON  In the absence of a Barcelona-based stage to trumpet its mobile broadband sector progress, the president of Huawei's carrier networks, Ryan Ding, rocked up at London's Dorchester Hotel today to boast 91 commercial 5G deals for the Chinese vendor and, like his main rivals, claim leadership in the industry.

He also managed to take 5G hype to a new level with an emotional claim for the latest mobile broadband technology.

Ding told an audience of media and industry analysts here that Huawei has landed 47 commercial 5G deals in Europe, 27 in Asia and 17 in other regions, for a total of 91. That contrasts with 81 5G commercial agreements cited by Ericsson at its London briefing held last week, while Nokia earlier this month said it had 66 commercial deals.

The vendor also qualified that 91 number later in the day, noting that this relates to 5G radio access network (RAN) deals, some of which include 5G core elements, and that the total number relates to deals with individual operators in their respective markets: For example, it counts three deals in total in China, even though it may have multiple deals with each of the major operators, whereas deals with country operating units of large telcos such as Vodafone each count as a 5G deal. 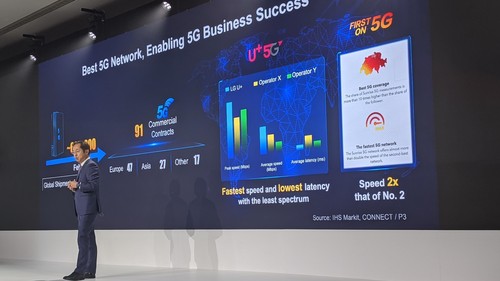 The numbers game seems important to the large 5G radio access vendors: Each is keen to show that they have leadership in one way or another. Now Huawei is claiming leadership in the number of deals it has but also still claims to have a significant lead over its Nordic rivals in other ways. When asked about claimed advantages over Ericsson and Nokia, Huawei executives cited customer feedback that it was up to 18 months ahead of its main rivals. When asked to pinpoint specific areas in which it boasts leadership, Ding simply said, "Technology."

When asked to elaborate he stated: "All the technology!"

No shortage of confidence there...

But such claims clearly don't fall on deaf ears, and based on comments made at last week's Ericsson presentation in London, the Swedish vendor would certainly question such bold statements.

Ding also talked up the potential for new business opportunities open to operators deploying 5G, covering consumer services potential (entertainment, cloud gaming, etc.) and the opportunities in multiple verticals such as manufacturing, agriculture, mining and broadcast (there was a TV cameraman in the room with, we were told, a 5G-enabled camera capable of live, high-definition broadcasts over cellular connectivity).

But Ding went further still in talking up 5G. He noted that Apple founder Steve Jobs had stated in 2001 that more bandwidth is needed to deliver emotion: That gave the Huawei man the opportunity to claim that while 4G delivers information, "you need 5G to deliver emotion."