Huawei, ZTE continue their advance under US fire  Dell'Oro

US efforts to halt the progress of Huawei and ZTE in global equipment markets have largely failed so far, according to new data published by respected market-research firm Dell'Oro.

The Chinese equipment vendors both managed to grow their share of revenues from the world's overall telecom equipment market last year, while the US's Cisco and Finland's Nokia suffered declines, says Dell'Oro in a company blog published today and distributed by email.

Data collected by the company shows that ZTE has staged an impressive recovery since 2018, when it was brought low by US trade sanctions that nearly drove it out of business. Since ZTE agreed to pay fines to have those sanctions lifted, its market share has risen two percentage points, to 10% of the total market last year. 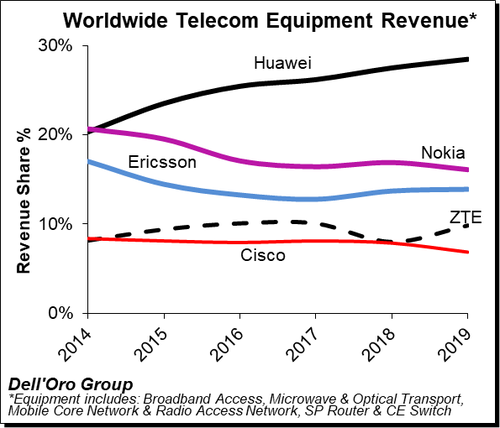 Huawei remained the world's biggest vendor by far, according to the Dell'Oro statistics, with slightly more than 28% of the market, up from 27.5% last year.

"The efforts by the US government to curb Huawei's rise has so far had mixed results," said Dell'Oro in a statement distributed by email. "We estimate Huawei's overall telecom equipment share continued to improve in 2019, but the pace of the 2019 share growth was weaker than its average 2014-19 share growth."

US authorities are still fighting to have Huawei banned from Western equipment markets on security grounds, arguing that its products are a potential conduit for Chinese spies. They have also tried to block the Chinese company's access to important US components and charged Meng Wanzhou, its chief financial officer, with fraud. She is currently under house arrest in Canada, where she is fighting an extradition case brought by US prosecutors.

Outside the US, many service providers have grown heavily reliant on Huawei and have warned local authorities that restrictions would reduce competition, drive up costs and slow down the rollout of important new 5G networks.

Both Huawei and ZTE have also been able to count on their huge domestic market for a boost, and the latest figures from Dell'Oro will give ammunition to critics of China who say its market is rigged in favor of domestic companies.

According to a slide from a Dell'Oro presentation seen by Light Reading, Huawei and ZTE together accounted for more than 90% of 5G sales in China in the final quarter of 2019, leaving Ericsson and Nokia with a smaller share relative to their LTE positions.

Dell'Oro reckons China was responsible for as much as 45% of 5G revenues globally in the fourth quarter. That update comes after Ericsson CEO Börje Ekholm estimated last year that China made up 60% of the 4G infrastructure market and said it was likely to account for a similar share of 5G in future. 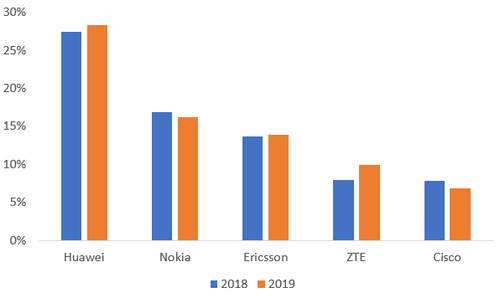 While Ericsson's share of the world's equipment market remained steady at 14% last year, Cisco and Nokia each lost a percentage point of market share, with Nokia falling to 16% and Cisco down to just 7%.