Cutting Huawei off from its chip suppliers is like starving a deep-sea diver of oxygen. The Chinese equipment giant has needed a very large tank to survive the trade sanctions imposed by Donald Trump and maintained by Joe Biden. It is remarkable that sales and profits have held up as well as the latest annual report indicates. But the pain is starting to show.

It was evident in the anemic sales growth of just 3.8% last year, pushing revenues up to about 891.4 billion Chinese yuan (US$136.1 billion) after they had risen almost a fifth back in 2019. The slightly breathless commentary from Ken Hu, one of Huawei's various rotating bosses, was not encouraging. "The supply restrictions for our smartphone business have caused us a great impact and we haven't really been able to see a clear picture about the supply for the smartphones so at the moment it is very difficult to make a clear forecast for the smartphone business," he said via an interpreter during this morning's results presentation. 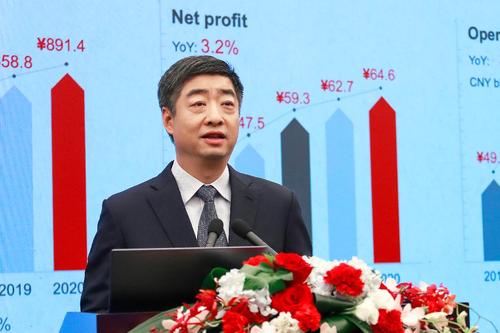 Huawei's Ken Hu cannot say where components for high-end smartphones will come from.

Huawei's big problem is a lack of short-term alternatives to critical components based on US expertise. Those include the chips it buys from TSMC, a Taiwanese foundry that made about $5.4 billion in sales from Huawei back in 2019. Huawei-owned HiSilicon might be able to design chips without US aid, but TSMC provides the manufacturing muscle. Outside its US-equipped Taiwanese plants, only Samsung can produce chips of the same caliber. And thanks to its own US exposure, the South Korean firm is also closed to Huawei.

The message from Huawei executives is partly that stockpiles will keep it afloat. "I can say we have enough inventory for supporting global customer applications, especially for 5G and software and the smartphones business," Victor Zhang, Huawei's UK-based vice president, told Light Reading. Operating cash flow tumbled 61.5% last year, to roughly RMB35.2 billion ($5.4 billion), partly because of stockpiling. A build-up means for each of the last two years Huawei has booked more than RMB167 billion ($25.5 billion) for inventory and contract costs, up from about RMB97 billion ($14.8 billion) in 2018.

Huawei also insists it is working on supply chain diversification, claiming "business continuity" has been a part of its strategy for the last ten years. "That is how we can cope with the challenges at the moment because we have multiple sources of supply for all our key components," said Zhang. "We are going to work on not having to rely on a single country or a single supplier."

But no one sounds very convinced. Analysts think Huawei will start to run out of some inventory in the coming months, while a TSMC rival that is able to serve Huawei simply does not exist. Although SMIC, a Chinese foundry, might have the wherewithal to be competitive in the future, most experts reckon China will need several years to catch up. Doing so is not an overnight job, everyone agrees.

Nor is even heavier spending on research and development likely to help. Huawei says it plowed about $21.8 billion into R&D last year, an astronomical figure that exceeds 2019 spending by roughly $1.6 billion. Another 9,000 people have been recruited for the R&D unit, giving that 105,000 employees altogether. But Ren Zhengfei, Huawei's founder, ruled out any move into chipmaking as recently as February. "Turning sand into silicon isn't our thing," he told reporters.

In executive circles, there still appears to be a forlorn hope that US authorities might have a change of heart. If they do not, the outlook for everyone is bleak, Hu predicted. "The decline of some of our businesses last year was directly attributed to a disruption in the supply chain," he said. "The suppliers of Huawei also suffered."

His latest implicit threat is that Huawei will simply find alternatives to its US suppliers, depriving those companies of between $10 billion and $20 billion in annual revenues. None could easily make up the shortfall, reckons Hu. "More possible is that other customers are only able to make up some of the gap, while a huge part of the business from Huawei will be taken over by other vendors and suppliers," he said. "And these other vendors taking over our purchasing needs are primarily the non-US vendors because the US sanctions involve a number of long-arm jurisdictions and suppliers will think about how to move away from US elements so they can avoid the US impact."

That Huawei is still warning of a "lose-lose" scenario following a change in US leadership smacks of some desperation. Supply constraints are not its only challenge, either. Geopolitical fear about China's influence has already prompted countries including Australia, Sweden and the UK to ban Huawei from their 5G markets. Other have restricted its role, while a few service providers in Europe  perhaps worried about the supply issue  are switching to Ericsson or Nokia, Huawei's Nordic rivals, without any obvious government prompting.

China up, everywhere else down

Accordingly, Huawei's carrier business recorded almost no growth whatsoever last year, after a sales increase of about 4% in 2019. Generating about RMB303 billion ($46.3 billion) in revenues, it will have owed much of that to a major 5G rollout in China, whose operators last year bought around 700,000 5G basestations for mainly urban areas.

A regional breakdown of performance backs up the assessment: Sales across all business units were up 15.4% in China, to roughly RMB585 billion ($89.3 billion), but they fell in every other part of the world. In Europe, the Middle East and Africa, Huawei's second-biggest geographical market, they were down 12.2%, to RMB181 billion ($27.6 billion). Almost 66% of revenues are now generated in China, compared with 59% in 2019.

Perhaps unsurprisingly, Huawei's best-performing unit was its enterprise division, the part that appears least affected by US sanctions and that is now expanding far outside core telecom. "The overall direction remains unchanged even though right now some have asked if we will have a change like raising pigs instead," said Hu with a seemingly straight face. After growing just 8.6% in 2019, enterprise sales were up 23% last year, to about RMB100 billion ($15.3 billion). Among other things, Huawei is now the second-biggest public cloud in China, Hu proclaimed.

Fueled by R&D spending, diversification into cloud, software and other parts of the ICT sector might ultimately compensate for declines in the older telecom business. At its consumer unit, too, Huawei is now emphasizing its role in building laptops and wearables, rather than just smartphones. Harmony OS, the operating system it is developing as an alternative to Android, already has the world's third-largest app ecosystem, with 2.3 million registered developers worldwide (but only 300,000 outside China), according to Huawei.

Without the boost provided by loyal Chinese consumers, the device unit would probably have fared worse than it did. Data from Counterpoint Research indicates that Huawei's share of global smartphone shipments dropped to 8% in the final quarter of 2020, from 14% in the previous three-month period and 20% in the second quarter. Huawei says it managed a 3.3% increase in device sales, to RMB483 billion ($73.7 billion), but the growth rate is down from 34% in 2019.

As growth stalls and billions of dollars are pumped into R&D, operating profit margins are under pressure, shrinking from 10.2% in 2018 to 9.1% in 2019 and just 8.1% last year. At any publicly listed Western business, shareholders would be in a fluster. Huawei, though, has the luxury of being able to promise it will maintain its R&D intensity without upsetting the markets.

Still, profitability has hardly fallen off a cliff, and Huawei managed to record a 3.2% increase in net income last year, to about RMB64.6 billion ($9.9 billion), giving it the same margin of 7.2% that it delivered in 2019. A lower tax bill was partly responsible, but layoffs outside R&D have also helped to protect profitability, with 6,000 jobs cut from the books last year, about 6% of the total. "We will try to sustain efficiency through various digital tools," said Shi Yanli, Huawei's deputy chief financial officer. On workforce pruning, at least, Huawei looks remarkably similar to its rivals.