To its enemies, Huawei must sometimes look a bit like those skyscraper-flattening monstrosities that Hollywood loves to unleash on downtown LA, or perhaps Thanos in the Avengers movie franchise. An army equipped with nuclear weapons, led by Captain America, can barely inflict a scratch. Under a hail of rockets, the beast just lumbers on.

It is still hard to gauge just how much damage US sanctions and international resistance have done to the Chinese network equipment giant. Last year, it was untypically frank about its problems, colorfully depicting itself as a bullet-riddled plane whose only mission was to remain airborne. Now a pall of secrecy surrounds it. Press conferences have become as anodyne as they were before Trump arrived in town. Important questions go unanswered.

The most pressing is where does Huawei buy components now the TSMC chip shop, and others using American equipment or expertise, are apparently closed. Huawei needs top-notch semiconductors not only for its smartphones  the only part of its business that has visibly suffered  but also for basestations and other network equipment. Analysts last year warned that Huawei would run out of key supplies in 2021 and have to fall back on lower-quality components. The UK said this partly justified its decision to ban Huawei as a 5G vendor.

But Huawei seems to have been gagged on this point like a coronavirus whistleblower. Asked this month by a CNBC reporter what the alternative was to TSMC, founder Ren Zhengfei instead wittered about a forthcoming glut of semiconductors. At a time when chips are as hard to find as a COVID-19 vaccine in Africa, the implication was that Huawei would soon be spoilt for choice. It won't be making its own chips, though  that much sounded clear. "Turning sand into silicon isn't our thing," said Ren.

It remains defiant, though. "I am even more confident about Huawei's survival than I was, because we have more ways to overcome those challenges," said Ren, without disclosing the ways. "Our sales revenue and profits in 2020 were higher than last year's [meaning 2019]." If reports turn out to be accurate, overall company revenues grew 11.2% last year, to $136.7 billion, and profits were up 10.4%, to $9.9 billion.

Huawei was coy about those reports. "That is not audited," was all a spokesperson would say on their veracity. What's striking is that they would imply profit margins held steady at about 7.2% between 2019 and 2020. If Huawei did pump a promised $20 billion into research and development, several billion more than it spent in 2019, then cuts elsewhere may have been sharp.

Happily, Huawei can rely on a domestic market that has awarded almost 90% of all mobile infrastructure business to Chinese vendors. When the number of 5G basestations in a country hits 700,000, as it did last year in China, any pain elsewhere becomes tolerable. Several hundred thousand more are planned in 2021. Contrast that with Europe, where the entire region in 2019 hosted fewer than half a million mobile sites, according to Ernst & Young.

But even in Europe, Huawei's networks business has not suffered as badly as it might have done. Several big countries have resisted political pressure to copy the UK and exclude Huawei from the future 5G market. They include Germany, where Huawei last year accounted for more than half the country's mobile infrastructure. Its government undoubtedly fears the ramifications of a ban for exports of cars and machine tools to China.

Huawei's massive fixed-line business has also been allowed to chug on outside the UK, which is now weighing a final decision. Smaller than the radio access networks business, the market for broadband products was still worth more than $8.4 billion in global revenues last year, according to Omdia, a sister company to Light Reading. Some 43% of that went to Huawei. In France, where authorities have indicated they will not renew licenses for Huawei's mobile equipment, Orange counts Huawei as one of its two main broadband vendors (the other being Nokia). 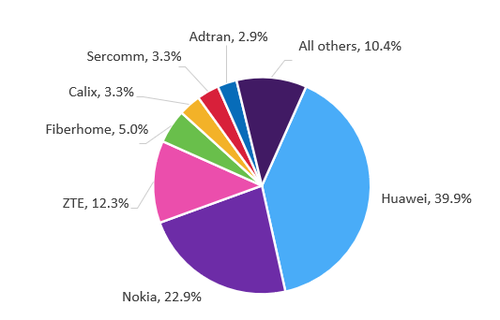 Huawei continues to show up in other parts of the network, as well, including transport systems and data centers. Several European operators, including Deutsche Telekom, Orange and Spain's Telefónica, have previously bought Huawei equipment for the cloud services they offer to their business customers. "Huawei provides standards servers (with the so-called x86 architecture) for the Open Telekom Cloud," said a Deutsche Telekom spokesperson by email when asked if that equipment remained in use.

On the mobile side, there are certainly no clear signs that Deutsche Telekom and other existing customers are worried US sanctions could rob Huawei of its competitiveness. And while several operators outside the UK are switching to Ericsson and Nokia, KPN in the Netherlands has done precisely the opposite, substituting Huawei for Ericsson with the rollout of 5G. Babak Fouladi, KPN's chief technology officer, plays down the risk of a components shortage at Huawei. "We look at it quite a bit as far as stock supplies go," he tells Light Reading. "Their products are still around for a lot of operators."

And what a lot there are, judging by data Huawei shared this week. Of today's 140 "live" 5G networks, Huawei built more than half, said Ryan Ding, the head of Huawei's networks division, during the company's traditional briefing before the annual MWC Shanghai show (normally scheduled for June, it switched places with the bigger Barcelona show this year due to coronavirus). There have been more loyalists than turncoats, it seems.

Last year's more panicky tones have been drowned out by the usual chest-thumping rhetoric. Third-party reports show "the best 5G networks in Seoul, Amsterdam, Madrid, Zurich, Hong Kong and Riyadh were all the networks built by Huawei," said a company press release that summed up Ding's comments. The Huawei-built network of South Korea's LG Uplus is faster than rival equipment, he bragged. Switzerland's Sunrise, another customer, tops network ranking charts year after year, he said. "I believe Huawei's technology and services have played a meaningful role."

How long this can last without a US reprieve is up for discussion. Ren craves a phone call with Joe Biden, Trump's White House successor, but doubts Huawei will come off the US trade blacklist. "We basically aren't considering it a possibility," he told reporters. "We have to remain committed to producing good products and solutions that we can produce to win customer trust." Making those will be tough if good components run dry. But for now, Huawei is still swinging.