Huawei 2021 sales decimated by US sanctions

New Year messages from Huawei are often garnished with Confucian proverbs or a side order of Western philosophical insight.

Guo Ping, one of the Chinese vendor's perpetually rotating chairmen, reached for his Cicero at the start of 2019, after the Trump administration had begun firing arrows into Huawei's camp.

The same executive's update for 2022 is rather more prosaic affair, as if a painful year has quelled his enthusiasm for poetry.

It begins with a clear acknowledgement of the damage done by US sanctions: Guo's reference to total revenues of 634 billion Chinese yuan ($100 billion) last year points to a 29% drop in sales compared with 2020.

That represents Huawei's first decline since before 2002, when the oldest records on its website show revenues were just RMB2.1 billion ($330 million). 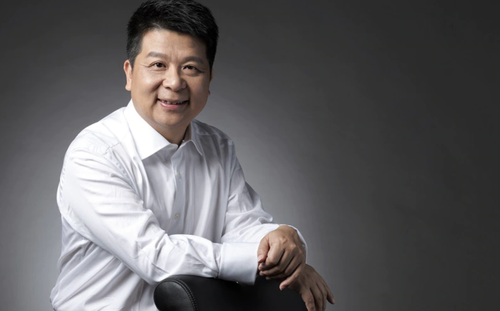 Tightened US restrictions and a backlash against Huawei in some of its most important international markets have finally caught up with the juggernaut.

While there is an absence of detail in Guo's statement, Huawei's consumer division  previously responsible for more than half its sales  has clearly suffered worst, denied the juiciest components and software by the latest American rules.

Huawei responded to that crunch by selling Honor, one of its smartphone brands, to Chinese government authorities (linked, critics argue, to Huawei).

Unconstrained by sanctions, it has subsequently thrived while its former parent has struggled. Counterpoint Research, an analyst firm, reckons Huawei's smartphone shipments fell 84% year-on-year for the third quarter of 2021, to just 5.8 million units.

Addressing the media last September, Eric Xu, another rotating chairman, predicted smartphone revenues would fall by $30-$40 billion in 2021, from $50 billion in 2020.

No easy way ahead

The Chinese vendor's older networks business looks in better shape. It has not been as badly affected by US sanctions, partly because network equipment is upgraded less regularly.

It has also been able to count on lucrative deals with China's state-backed operators, which have cut the amount of work they give to Ericsson and Nokia, Huawei's big international rivals. For those reasons, the carrier business remained "stable" in 2021, said Guo.

But it cannot possibly compensate for the consumer decline and faces problems of its own. Just as the Nordic vendors have struggled in China, so Huawei has lost deals in Europe as governments worry about its links to the Chinese government.

And after a sharp rise in mobile equipment sales last year  with Dell'Oro, an analyst firm, forecasting a 13% increase in late 2021  market revenues are expected to grow just 2% in 2022.

What's more, unless China can produce advanced alternatives to Taiwan's TSMC and South Korea's Samsung, the foundries that produce most of the world's most sophisticated chips, US sanctions denying Huawei access to those firms will eventually hurt its networks business, too.

Huawei's hope seems to be that a recent pivot to software and IT will bring a revival. Revenues for this enterprise unit were up sharply in 2020, rising 23%, to more than RMB100 billion ($15.7 billion).

But that was just 11% of total sales. Even with "solid growth" last year  the terminology used by Guo in his New Year message  Huawei is unlikely to find the tens of billions it lost at its gadget unit in new enterprise ventures.

That is partly because there is already lots of entrenched competition in this sector, including from Chinese players such as Baidu, Alibaba and Tencent (the BAT trio).

John Dinsdale, the chief analyst and research director at Synergy Research Group, put Huawei's share of the global market for cloud infrastructure services at only 1% for the third quarter of 2021. Given Synergy's figures, that would translate to just $450 million in quarterly revenues.

Nor do activities related to Huawei's cloud business have immunity to American sanctions. Omdia, a sister company to Light Reading, calculates that Huawei's revenues from data center servers dropped 44% for the third quarter of 2021, to about $768 million, compared with the year-earlier quarter.

The explanation seems to be Huawei's inability to procure x86 chips made by Intel or AMD, used in about 95% of all data center servers.

A switch to alternatives designed by the UK's Arm has been forced on Huawei by US restrictions.

"They sold off their x86 business in October because of US sanctions and are now fully focusing on Arm servers," says Manoj Sukumaran, a principal analyst with Omdia.

Rivals pick up the slack

Outside China, the big problem for Huawei is that no government nervous about the role of Chinese companies in critical infrastructure is about to let one provide software for cars, mines or factories.

Huawei's opportunity in these fields is limited to China as well as a dwindling number of friendly countries in Africa, the Asia-Pacific and Europe.

That might be enough: China alone accounted for two thirds of company revenues in 2020. But China's government may be just as concerned about overreliance on Huawei as authorities are in other parts of the world. After all, much of the recent backlash against US Big Tech has come from US regulators. 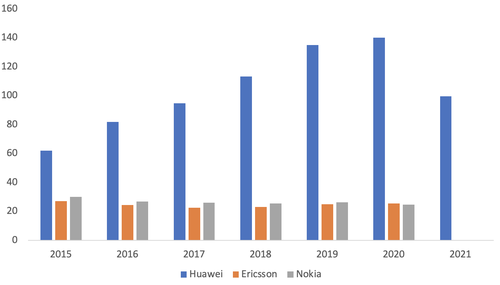 (Source: Companies)
(Notes: All dollar conversions are at today's exchange rates;
Ericsson and Nokia have yet to report revenue numbers for 2021)

Rivals, at least, will relish Huawei's difficulties, even if some fret about the long-term geopolitical implications of the clash between China and the US.

Nokia claims to have enjoyed the same level of growth, managing about 15.8 billion ($17.8 billion) in nine-month revenues. Oppo has taken up some of the smartphone slack, growing third-quarter smartphone shipments by 23% year-on-year, according to Counterpoint.

Guo had nothing to say about profitability in his latest missive, but Huawei's operating margin fell more than two percentage points between 2018 and 2020, to just 8.1%.

Staff numbers have risen from 188,000 to 197,000 over that period as Huawei has pumped resources into research and development. But margin protection has cost about 16,000 jobs elsewhere, the accounts show. With sales down so much last year, another major round of cuts will have been difficult to avoid.