5G NEXT WAVE DIGITAL SYMPOSIUM  Building a 5G network in Switzerland has come with a unique set of challenges for Swisscom, the telecom incumbent.

The small European country is a skier's paradise, for one thing, with more unaccommodating jagged peaks than convenient street furniture. The Swiss have also had an anxiety attack about the supposed health risks of mobile network equipment.

There are stricter limits on power levels than anywhere else in Europe.

Despite all this, Swisscom has managed to construct a 5G network that today covers about 96% of the Swiss population. It is a source of pride for Ericsson, Swisscom's network partner, as one of the Swedish vendor's first live 5G deployments in Europe.

And its mobile network has stacked up well against the competition. In December, OpenSignal, a monitoring firm, ranked Swisscom ahead of Sunrise, with its Huawei-designed network, and Salt, sporting a Nokia system, on a whole range of mobile network measures. 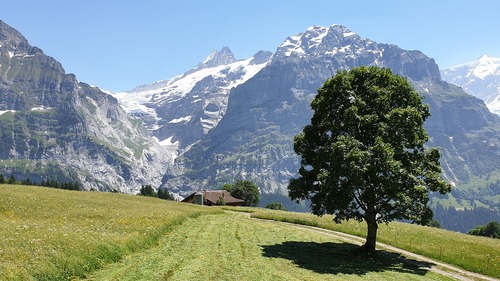 So how did Swisscom do it? Partly, it claims, thanks to a mobile network "grid" that is much denser than rival infrastructure, meaning there are more sites available.

According to its 2020 annual report, Swisscom has roughly 9,000 antenna sites, one quarter of which it shares with competitors. This gives Swisscom about 10.5 sites for every 10,000 people. The equivalent number for BT in the UK is just 2.9.

Those site numbers are important because Swisscom currently relies for its 5G services on midband spectrum that does not carry signals as far as lower frequencies.

Swisscom already held midband airwaves used for older mobile technologies, and it picked up 120MHz of spectrum in the 3.5GHz band back in an early-2019 auction, when it paid some 195.6 million Swiss francs ($210 million) for licenses that also covered the 700MHz and 1400MHz ranges.

A comparison of 3G and 4G speeds puts Swisscom ahead

Earlier densification was a response to those strict limits on radiation levels imposed by Swiss authorities. Swisscom has "had to densify already to run lower-power sites," said Gabriel Brown, a principal analyst with Heavy Reading, a sister company to Light Reading.

Düsener puts the power limits at about one tenth of what operators in other countries are allowed to do. A less-dense network might have left Swisscom's service with more holes than Emmental cheese.

Nonetheless, lower-frequency spectrum will soon come into play to boost connectivity for customers who may be some distance from an antenna.

"We are just freeing up lowband from 2G in April and then will use lowband to assist at the cell-edge parts," said Düsener. The gradual phaseout of 2G services means this can be done without disruption.

Still, the Swisscom rollout has made use of a controversial network technology favored by Ericsson but dismissed by a few others.

Dynamic spectrum sharing, or DSS, means spectrum in bands such as 1800MHz and 2.1GHz can be split between 4G and 5G services. It is a flexible option but one that can limit the amount of spectrum dedicated to 5G, as critics have pointed out.

They have included no less a person than Nick Read, the CEO of Vodafone, who oddly lashed out at DSS technology back in November, even though his own company appears to have made use of it in parts of Europe.

"Some operators are taking DSS, which is effectively giving you a 5G symbol but 4G performance," he told analysts on a call.

"We know that if we deploy the significant 3.5GHz-type spectrum along with 700MHz when it is available in each of the markets, that is real 5G."

Swisscom's rollout has not led to an obvious spike in capital expenditure so far. Overall spending actually fell to about CHF2.2 billion ($2.4 billion) last year, from roughly CHF2.4 billion ($2.6 billion) in each of 2018 and 2019.

Even so, at a fifth of revenues, that is proportionally more than most European service providers invest each year. Nor has 5G had any visible impact on Swisscom sales.

5G plus and beyond

Düsener insists the technology has already served part of its purpose.

"I can only say it is a must. Without it, we won't have the capacity to fulfill customer needs already today," he said. Levels of data traffic have increased by a factor of 100 since 2010, according to his data.

A crunch may be coming, too. In its annual report, Swisscom warned it could "no longer keep up with the increasing volume of data traffic."

"We couldn't get access to some areas" for indoor coverage, said Düsener.

He concedes Swisscom has made little progress so far on what he calls "5G plus." Partly, that will mean boosting service speeds to an upper limit of 2 Gbit/s through network improvements.

A move to standalone 5G is also planned. The non-standalone variant Swisscom has deployed means the 5G New Radio system piggybacks heavily on existing 4G infrastructure. Standalone will bring a new 5G core and other features.

"The first public step will be user trials and let's see  this year or next year," said Düsener when asked about deployment.

The future vision is of new revenue-generating services that make use of network slicing, and other more advanced 5G features.

That, of course, is a vision shared by other service providers worldwide, but Swisscom is able to boast at least one big advantage over many international peers  everyone in a country as geographically small as Switzerland is already close to the infrastructure that hosts content and applications.

In the US, mobile latency, the roundtrip time for a signal, averages 80 to 100 milliseconds, says Düsener. For Swisscom, it is just eight.

"The need for an edge cloud is not there in Switzerland," he said.

"On the contrary, if you want to develop the test services that need these low latencies, you are more than welcome to get in contact with us. We are a small country with a dense network."