The company reported that mobile network data traffic grew 10% between the fourth quarter of 2021 and the first quarter of 2022. For the year-over-year comparison, that growth reached 40%. 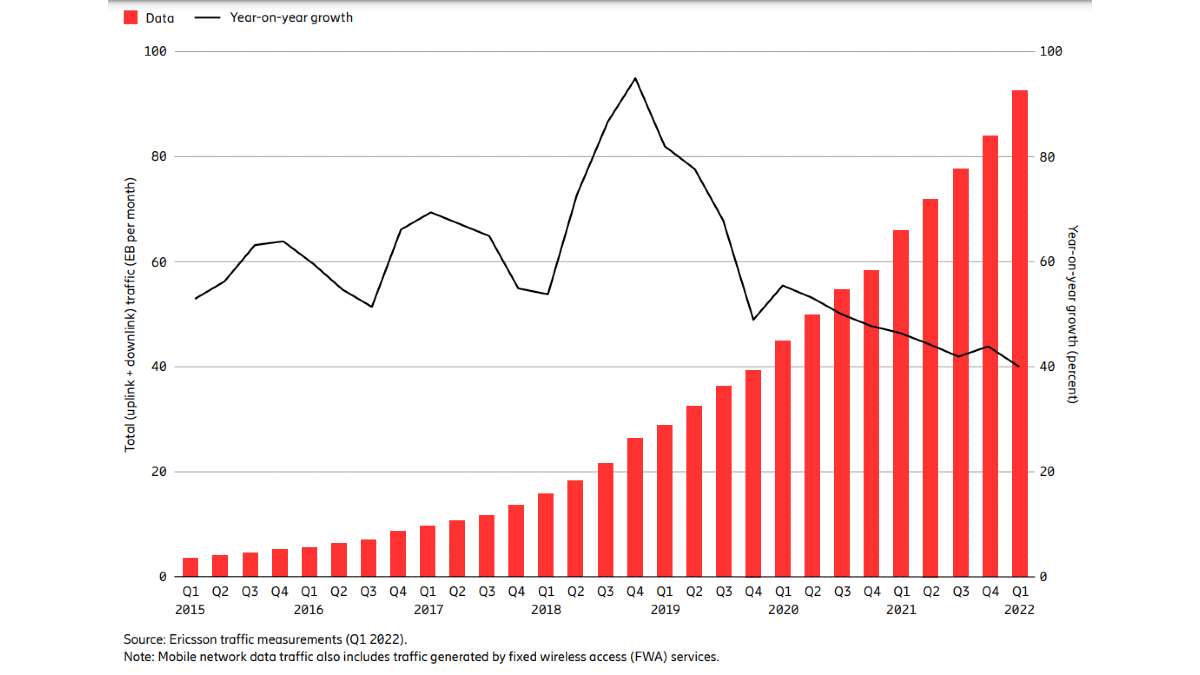 In its report, Ericsson showed the global mobile network data traffic and year-on-year growth. Click here for a larger version of this image.
(Source: Ericsson. Used with permission.)

"In absolute numbers, this means that it has doubled in just two years (since Q1 2020)," the company wrote in its new Mobility Report, released Tuesday.

"Over the long term, traffic growth is driven by both the rising number of smartphone subscriptions and an increasing average data volume per subscription, fueled primarily by increased viewing of video content," the company added.

According to Ericsson, mobile subscribers are making use of the additional network capacity and faster speeds provided by those investments. The company said that, globally, the average smartphone user is expected to consume 15GB per month in 2022.

In North America, the company estimated that average monthly mobile data usage per smartphone could reach as high as 52GB in 2027. "The data traffic generated per minute of use will increase significantly in line with the expected uptake of new XR and video-based apps," the company wrote. "This is due to higher video resolutions, increased uplink traffic, and more data from devices off-loaded to cloud compute resources."

OpenVault, another vendor that tracks data traffic on wired networks in North America, recently reported similar findings. According to OpenVault, the average wired Internet customer consumed a total of 536.3GB in the fourth quarter of 2021, an increase of 165% over the firm's findings from the fourth quarter of 2017, when consumption was 202.6GB.

Taken together, the companies' findings paint a picture of a dramatic expansion in data demand on wired and wireless networks in North America and globally. Indeed, such increases have already sparked unprecedented demand in vendors' networking equipment to keep pace with demands. Further, such demand has already withstood several price increases among many leading vendors.

The situation reflects the importance of telecom networks globally following a pandemic that pushed many to work and school remotely from home. And in response to the situation, governments globally have begun pushing funding toward network operators to construct networks in underserved areas, and to Internet users themselves who may struggle to afford such connections.