There's been plenty of hype over the past few years about 5G here in the US. But don't worry, there's a good chance you're going to hear even more about it as we slowly but surely enter what I'm going to call "Phase 3" of 5G later this year.

The third phase of 5G promises to be as exciting as the third phase of the Marvel Cinematic Universe. Blockbuster movies like Spider-Man: Homecoming (2017), Black Panther (2018) and Avengers: Endgame (2019) peppered the MCU's third phase, and in the third phase of 5G we'll probably start to see widespread 5G services reaching 300-500Mbit/s. According to network-monitoring company Ookla, that's way, way faster than today's average 4G and 5G speeds of around 70Mbit/s  and it's more than double the speeds you can expect from the average fixed, wired Internet connection.

Why? It's because all of the nation's big 5G providers will begin putting midband spectrum into their 5G networks. Midband spectrum has been described as the "Goldilocks" of 5G because it toes the line between covering broad geographic areas and providing fast speeds. And though there's a bit of a debate about which "flavor" of midband spectrum is the best, there will be enough of it to start making a difference in large parts of the country across multiple operators as we move into 2022.

Here's a chart showing how and when AT&T, Verizon and T-Mobile will construct their midband 5G networks: 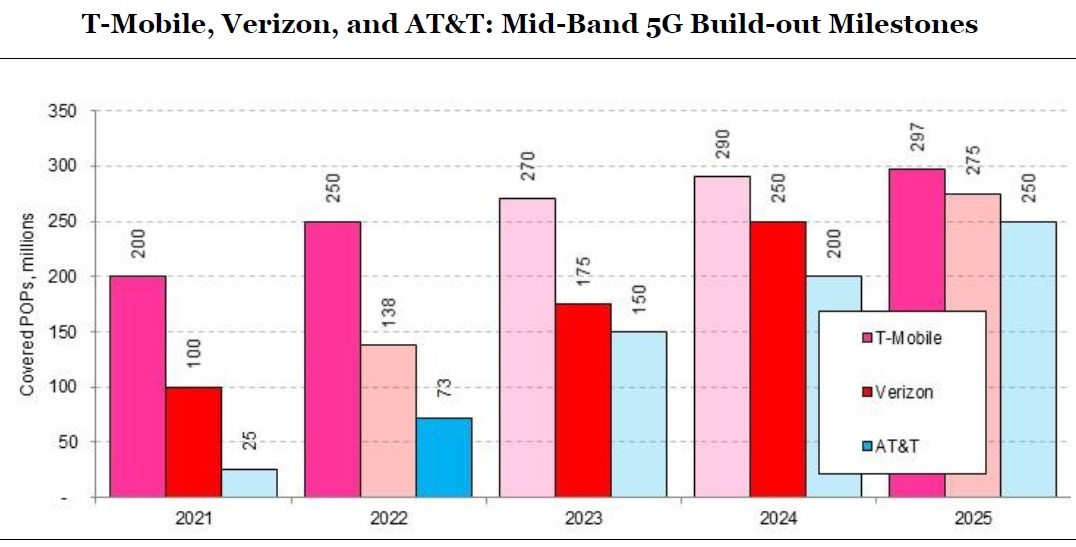 T-Mobile, Verizon and AT&T are in the midst of a major rollout of 5G in midband spectrum to millions of POPs (points of presence, which is roughly equivalent to people) in the coming years. Click here for a larger version of this image.
(Source: MoffettNathanson)

So why call this the third "phase" of 5G? It's because each of these operators already tried to make a 5G splash by deploying the technology first in highband spectrum and then in lowband spectrum, with varying degrees of success. One even attempted to launch 5G using its 4G network.

Here's how each of the previous phases played out:

AT&T was the first carrier to deliver "5G" to a large number of consumers. The only problem is that the operator did so using its 4G network.

AT&T introduced its "5G Evolution" brand in 2017 with the argument that advanced 4G LTE technologies helped evolve its 4G service into something like 5G.

Then, at the end of 2018, AT&T began replacing the 4G LTE icon on its phones with the "5Ge" icon. The result? Large numbers of AT&T's customers thought the carrier had magically updated their phones to 5G without charging them one extra cent. On a purely strategic level, it was a clever marketing move that helped take the wind out of competitors' sails. It also added more complexity to an already complex topic.

Verizon wasn't alone in offering mmWave 5G services  AT&T also launched the service in a number of major cities, as did T-Mobile. But Verizon was the operator that loudly touted the network and its capabilities  the operator's CEO even played a starring role in the launch of Apple's first 5G iPhone.

Now, though, Verizon officials no longer hint at grandiose mmWave buildout plans. Instead, the operator now expects to cover just 2 million households with a mmWave-powered 5G Home service, down from previous promises of up to 30 million. The financial analysts at Sanford C. Bernstein & Co called it a "staggering whiff."

"The lie of millimeter wave is dead," agreed the financial analysts at New Street Research after hearing of Verizon's latest mmWave buildout targets.

After this article was published, Verizon Consumer Chief Ronan Dunne took to Twitter to push back against the notion that Verizon had backtracked on its mmWave plans. He reiterated the company's expectations that up to 50% of its network traffic in urban areas will eventually travel over its mmWave network, though he did not provide a firm timeframe for that goal. He also said the company's 2 million coverage goal for 5G Home is for 2021 and is not related to the company's plans to cover 30 million households with 5G Home by 2023.

T-Mobile was the noisy champion of the second phase of 5G, which involved operators deploying the technology on their lowband spectrum holdings to cover wide swathes of the country with 5G speeds that were not much faster than 4G.

The whipsaw between highband 5G (fast but small coverage areas) and lowband 5G (slow but covering large areas) was painfully apparent in T-Mobile's 5G messaging. In the summer of 2019, T-Mobile promised that 5G speeds "will be up to 10x faster, compared to LTE." But by the end of 2019, after the launch of its lowband 5G offering, T-Mobile began warning reviewers and customers that its new lowband 5G network would be on average only 20% faster than its 4G LTE network.

Verizon and AT&T offered similar warnings of lowband 5G speeds, despite an endless series of ads touting the game-changing nature of their 5G services. Indeed, PCMag began warning readers to turn off their Verizon 5G to obtain faster connections on the operator's 4G network.

Will Phase 3 of 5G  powered by midband spectrum  change things? Will it be as satisfying as Avengers: Endgame, the climactic conclusion of the third phase of the Marvel Cinematic Universe?

The answer appears to be a firm "maybe." Some executives are hoping for new applications to spring from the speedy 5G networks of the future.

"When we launched 4G, the market could not see what was coming around the corner. Or that in a matter of years, stepping out from the curb and hailing a cab would become obsolete," explained Verizon CEO Hans Vestberg during the company's recent analyst event. His comments were a nod to companies like Uber and Lyft, which developed their services for 4G connections. "We're about to turn that corner again. And there will be the next generation of unicorns ready to innovate on what we are building. That's not a prediction; it's a promise."

But the first big application of 5G technology beyond smartphones  for fixed wireless Internet services, in a challenge to the cable industry  isn't leaving anyone dumbstruck.

"Cable investors had braced for 'shock and awe,' " wrote the financial analysts at MoffettNathanson in an assessment of 5G operators' newly announced fixed wireless deployment plans. "This wasn't that."