Resembling the model of a pre-launch rocket at Cape Canaveral, a 5G antenna sprouts incongruously from a rooftop in Munich's historic city center.

It is one of 500 built by Telefónica Deutschland in the Bavarian capital, providing coverage to about 80% of Munich residents, or so the operator claims. Throughout Germany, it now has roughly 10,000 antennas in commercial operation for the newest generation of mobile technology.

The rollout of 5G has become the latest battleground for German operators desperate to retain customers and sell them higher-speed services in a saturated mobile market.

On the same day as Telefónica's update, German incumbent Deutsche Telekom was boasting a 5G footprint of 64,000 antennas, more than six times the number deployed by its rival. Back in January, Vodafone, the country's other network operator, was trumpeting its own efforts. Around 18,000 5G antennas were in operation then, it said. 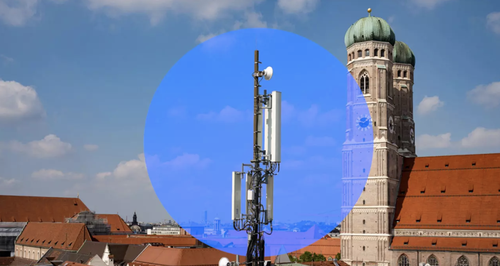 A glance at these antenna figures would suggest Telefónica and Vodafone badly trail Germany's biggest operator on 5G rollout. But mobile antennas, unlike Orwell's animals, were never sold as equals.

For Telefónica, the emphasis has been on using 5G equipment compatible with higher-frequency spectrum, better suited to providing faster connectivity. Deutsche Telekom's priority seems to have been coverage.

For that reason, it has relied on lower-frequency airwaves  including the 700MHz band and a slice of 2.1GHz spectrum, originally awarded for 3G technology but "refarmed" for the newer standard  to sprinkle antennas across Germany.

By using a system called dynamic spectrum sharing (DSS), it has been able to split lower frequency spectrum between 4G and 5G services. Deutsche Telekom now claims about 90% of the population can access its 5G network.

That is markedly higher than Telefónica's population coverage claim of about 33%. The drawback is the experience. Because less spectrum is available in low-frequency bands, they do a relatively poor job of delivering high-speed connectivity.

Critics say 5G in these bands performs no better than 4G  or makes such a tiny difference that no user would notice. It is the equivalent of driving a supercar in a 20mph speed-limit zone.

The focus on coverage seems borne out by third-party research. In November, OpenSignal ranked Deutsche Telekom way ahead of Telefónica and Vodafone on availability. But on download speed, it was behind Telefónica.

Deutsche Telekom, though, has denied suggestions it has prioritized DSS technology and coverage at the expense of 3.6GHz rollout.

"It is being used for a significant capacity boost," said Abdu Mudesir, the operator's chief technology officer, when asked about 3.6GHz investments during Mobile World Congress.

Since the end of last year, the number of these midband sites does appear to have grown significantly  from the 3,600 cited in Deutsche Telekom's annual report to around 5,000 in this week's update.

That puts it on par with Telefónica, which said 5,000 of its 10,000 sites were operating at 3.6GHz in its own update this week. If Deutsche Telekom had been at some disadvantage on midband rollout, the latest data suggests that is no longer the case.

What's more, it is conceivable that Deutsche Telekom lags Telefónica in the OpenSignal report from November because it is being measured across a wider coverage area, including huge swathes of the country where it has relied on lower-frequency spectrum.

And while Deutsche Telekom was behind Telefónica on download speeds, it provided much faster upload connectivity than either of its rivals, according to OpenSignal.

What of Vodafone? It has been less forthcoming on the details of its 5G deployment in public announcements but insists its rollout is based on a variety of spectrum bands, including 700MHz, 1800MHz, 3.6GHz and even 26GHz (although here it operates only one antenna in the Red Bull Arena in Leipzig).

Whether consumers really care is another matter. Investment in 5G, wherever it is aimed, does not appear to have given any operator a meaningful commercial advantage so far.

Companies are spending money partly due to FOMO (fear of missing out) and partly for marketing reasons: The unexpected emergence of a 5G killer app could be as disastrous for any laggard as not being able to market the latest generation of mobile. Expect the 5G wars to continue.