Fast, efficient and low-cost are adjectives that usually cling to 5G, but they could also describe Finland's latest auction of spectrum for the hyped mobile technology.

While Germany's last spectrum auction dragged on for weeks, Finland's took about as long as the average sauna, even foregoing the customary self-flagellation with birch twigs. For the price of a German 5G license, an operator could have bought nearly an entire mobile network in Finland. A license in Finland cost about one sixteenth of Portuguese soccer player Cristiano Ronaldo.

OK, OK, the comparison between Finland and Germany is not entirely fair. The German auction that finished in June last year was for extremely versatile and highly prized spectrum in the "midband"  good for coverage as well as connection speed. Finland has just flogged (pardon the sauna pun) a bunch of millimeter wave frequencies that are about as useful as a sprinter who keels over every 10 meters. Signal strength is so bad in this 26GHz range that it would take the GDP of a small European country, pre-coronavirus, to blanket America with enough 5G network equipment for a nationwide service. Outside Verizon, one of the biggest mmWave landowners on the planet, few are very interested.

That partly explains why Telia, Elisa and DNA, Finland's three existing mobile operators, yesterday each spent just 7 million (US$7.9 million) on a 26GHz license valid for the next 13 years.

But it's not the only explanation. When Italy sold mmWave spectrum in late 2018, the frequencies cost 1.7 times as much as they did in Finland on a like-for-like basis. That auction saw five companies scrapping over just 1,000MHz. Finland had only three bidders for an expansive 2,400MHz. Licenses went for the starting price.

The differential was even greater when countries previously sold their mid-band frequencies. After Italy carved a meager 200MHz into four uneven blocks, frenzied bidding forced the overall take up to about 4.3 billion ($4.9 billion) and left two companies  Iliad and Wind Tre  with only 20MHz each. Finland calmly proffered a generous 390MHz, entitling each existing operator to 130MHz. Like-for-like, the Italians spent 11 times as much as the Finns, who are in a much better position to support high-quality 5G services than their spectrum-starved peers. 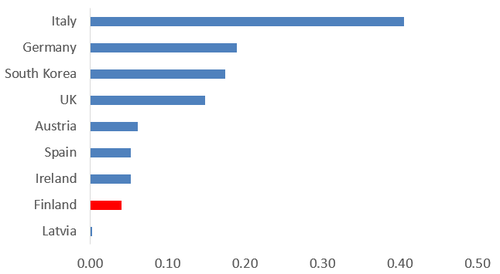 Nevertheless, a debate about the best way to allocate spectrum is unlikely to end during the current pandemic. Fans of the auction think it's only fair that operators pay for a public resource, even something as intangible as the air we breathe. Others (usually operators) say economies would do better if licenses were low-cost or even free, leaving service providers with extra funds for speedy network deployment.

Skeptics are doubtful, thinking money would end up with shareholders rather than in network rollout. But this need not happen if regulators did a proper job of policing licensees and ensuring they meet their license obligations.

What's incontrovertible is that operators in Germany and Italy, where licenses went for lofty amounts, have subsequently formed the sort of network-sharing partnerships they would have recoiled at years ago. Some are pooling not only their sites and towers but also the equipment used in these locations. Others are divesting infrastructure and setting up tower units to raise capital.

Competition is also suffering on the network side, as it inevitably must if companies are allowed to use the same basestations and equipment vendors (including controversial Chinese ones) as their rivals. Few regulators have made a fuss because they helped create the conditions for this network-sharing mosh pit in the first place.

In the meantime, important 5G auctions have been delayed throughout Europe because government spectrum landlords are unwilling to extend a freebie to their coronavirus-stricken tenants. In France, the government is itching to get a 5G auction underway later this year, despite resistance from Bouygues, one of the country's biggest service providers. Delays could leave the region years behind other parts of the world, a major setback if 5G turns out to be as game-changing as governments think.

Would operators invest in 5G this year if they were given licenses free of charge? Despite a budgetary squeeze, companies that already have 5G licenses are continuing to roll out their networks. Taking advantage of new technology features, Deutsche Telekom, the region's biggest operator, expects to cover half of Germany with a 5G network by the end of the year. Vodafone, a close rival, has similarly bold plans. In the UK, BT and Vodafone seem determined not to let pandemic-era pain disrupt their 5G deployment.

A collective effort to imitate Finland and award 5G licenses for minimal fees would be a rare example of helpful regulation during an economic crisis. Sadly, many countries still seem to regard spectrum award as an opportunity for short-term gain.