Europe's telecom incumbents may have imbibed something more potent than the average pilsner when they signed off on the latest report from ETNO, a club whose main purpose is whingeing to European regulatory authorities. Prepared by the Boston Consulting Group (BCG), it calls for a 300 billion ($353 billion) investment in Europe's telecom infrastructure by 2025. Perhaps double vision obscured the numbers.

They are gob-smackingly, stomach-churningly big, even during an era of flinging billions of euros at furloughs so people can fester in their homes. Europe spent 254.5 billion ($297 billion) on telecom infrastructure in the five-year period from 2015 to 2019, ETNO reckoned in a previous report. Over the next five, it seems to think Europe can not only maintain spending but rustle up an extra 45.5 billion ($53.5 billion) for gigabit and 5G connectivity, boosting annual investments by 18%. 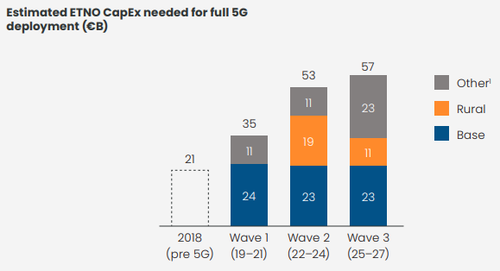 Europe does have a coronavirus recovery fund, the value of which it puts at 750 billion ($883 billion) in the first instance. But there are more deserving recipients than operators, which must look fairly well off to hard-hit airlines and the tourism industry. Any ETNO members groveling for cash would risk appearing like pinstriped bankers in the queue for a soup kitchen. Nor does the BCG report actually seem to be a call for Keynesianism. Public funding is mentioned only four times in the 65-page document, mainly as an aside.

No, the disingenuous pledge seems to be that private money will flow into networks if authorities play nicely. The litany of complaints is all too familiar. Europe's operators lack scale (read, let us merge), investors have been discouraged by heavy-handed pricing regulations, competitors have been unfairly subsidized and spectrum is too expensive. Nothing here is very original.

For the love of Europe

It is not that any of these complaints is invalid. The falsehood is the implication that addressing them would boost private-sector investment by nearly a fifth in a saturated market of penurious customers. ETNO does not make a very convincing case for itself, either. It acknowledges that fiber investments in rural communities "will likely meet investors' skepticism." BCG's own experience shows return on capital employed is below the cost of capital for between 20% and 40% of a country.

ETNO tries its best to enthuse investors by saying "the money does not only flow one way." Trouble is, it rarely flows back to the operators. For all the investments service providers have already made in fiber, 4G and 5G networks (in, let's be frank, the most cashed-up communities), their revenues have been flattish ever since the final holdouts against the mobile revolution crumbled (even technophobic grandparents now sport phones). More 5G and more fiber is simply not going to make them any richer.

Unless operators can uncover new sources of revenue  something they have failed to do in the last 20 years  that means investing an even bigger share of sales. Operators overall spent 18% of their revenues on capital expenditure between 2015 and 2018, says ETNO. If Telefónica's Spanish arm were to increase spending by the same percentage, its own capital intensity would rise from 11% to 13%. At its main European businesses, it would need an additional 600 million ($706 million) annually.

Sounds easy? It might be for an Internet giant with enough cash reserves to buy small European countries. Telefónica, however, owes about 35.2 billion ($41.4 billion) in net debt at a time when markets fear the imposition of higher interest rates. And its entire market value is only 21.6 billion ($25.4 billion) today. Nothing that smiling, acquiescent regulators do will make a big-enough difference.

The subtext in the BCG report is that operators are not doing it for themselves but for the love of country, or perhaps the European Union. Because that's exactly how private-sector companies think, right? "Deployment of 5G will generate massive economic and environmental benefits, which the EU estimates at 113 billion [$133 billion] a year in Europe as well as direct employment of some 2.4 million jobs by 2025," says the report. Per-capita GDP is 0.9% to 2% higher when people have gigabit, apparently.

The message, in short, is treat us nicely and we'll lavish 300 billion on telecom networks so that Europeans are better off. No wise regulator would take any of this seriously. Operators might as well have said 5G and fiber will double GDP. After all, Europe's GDP apparently grew 1.6% in 2019, according to the World Bank, even before this broadband splurge.

Selling this one to shareholders would be an interesting experiment. In October last year, Enrique Blanco, Telefónica's chief technology officer, was suggesting the days of sky-high capital intensity might soon be over. "We are full convinced by fiber because it is the much more future-proof technology that we can offer our customers," he said during the Broadband World Forum. "Today we are offering them 1 Gbit/s, but this same access can be fully supporting 10 GPON and the evolution to 50 GPON, and this means all the capex we are doing is for the next 30 or 50 years."

Unfortunately, Enrique, it won't even stop in 2025, according to ETNO. Its report talks of a subsequent investment wave between 2025 and 2027 requiring 3.2 times as much annual capex as in the pre-5G era. There simply aren't enough cell sites to cope with demand, it seems to think. And it is not just talking about small cells, either. Operators will need 40% more macro cells by 2027, according to ETNO, and six times as many small cells as macro cells.

Nobody seems to have warned Michael Trabbia, Blanco's equivalent at Orange. "We are using more efficient technology and think we will be able to have the same coverage and won't need to add sites," he told Light Reading during a webinar in December when talking about macro cells that use 3.4-3.8GHz spectrum, the main 5G band.

The sad thing is Europe's operators would undoubtedly benefit from a loosening of the rules and a more laissez-faire approach. Not so much they could spend 18% more each year, but enough to improve their fortunes. Besides promising investments they will never deliver, the ETNO report conveniently glosses over all the strategic blunders that operators have made, suggesting regulation is the sole cause of their problems. Lobbying can surely be smarter than this.