Markets have been left bemused by Ericsson's $6.2 billion takeover of Vonage at the start of the week. The Swedish firm's share price fell by nearly 6% on the day the deal was announced, wiping about $2.6 billion off its market capitalization. That was obviously not the immediate reaction CEO Börje Ekholm would have wanted. What does he see that investors are struggling to appreciate?

The deal marks the third significant takeover under Ekholm, Ericsson's biggest-ever acquisition and one of its most difficult to compute. The first, for a German antenna business called Kathrein, was something of a no brainer: Ekholm was doubling down on the radio access network business and yet Ericsson lacked a strong antenna business of its own. Then came the bigger, $1 billion takeover of Cradlepoint. The logic, again, was reasonably plain. Cradlepoint sold wireless products to non-telco businesses, a market Ericsson was eyeing hungrily.

Since then, Ekholm has spoken of the need for additional takeovers to sate his appetite for this enterprise sector. "It is hard to speculate, but our ambition is to make that a very sizeable part of Ericsson in a few years' time," he told Light Reading in August. "It will probably require some more acquisitions, so you will see that coming as well."

Ericsson has not been short of money to spend, either, with about $6.1 billion in net cash at the end of September. But few would have seen Vonage as a target. In the popular mindset (if it exists there at all), it is still known as one of the original pioneers of Internet telephony and a combatant in the early skirmishes over net neutrality. It has been a shapeshifter since those days, but the 5G enterprise market is not a part of its story.

Indeed, Vonage generates most of its sales today from something it calls the Vonage Communications Platform (VCP), a medley of unified communications products. It competes here against firms including 8x8, RingCentral and Zoom and hauled in about $915 million in VCP revenues last year, a 14% increase on its 2019 take. The other $333 million Vonage made in sales came from its slowly perishing consumer division.

Unified communications? Ericsson? VCP does not obviously chime with anything Ekholm and his lieutenants have been saying about the strategic priorities for a firm whose focus is 5G. Investor befuddlement is no surprise. Ericsson's real interest, though, seems to be in a dynamic bit of the VCP business that might just have some 5G value.

That bit taps into the growing demand for APIs (application programming interfaces), a market Ekholm has noticed is hot property. These APIs, essentially, are the joiners between technologies and services sold and used by different companies. "The simplest example is the SMS that companies send you for two-factor authentication," explains James Crawshaw, a principal analyst with Omdia (a Light Reading sister company). "Twilio allows you to connect your application to all the mobile operators in the world so you don't have to do 1,000 separate integrations."

It is big business and set to get even bigger. Ericsson reckons API trading generated about $6 billion in revenues last year. By 2025, that market will be worth $22 billion annually, it estimates. And Vonage is the number-two player in this sector, behind Twilio, says Crawshaw. Its API revenues were up 43% year-on-year for the recent third quarter, to $155 million, as overall Vonage sales grew 13%, to $358 million.

VCP total addressable market in $B 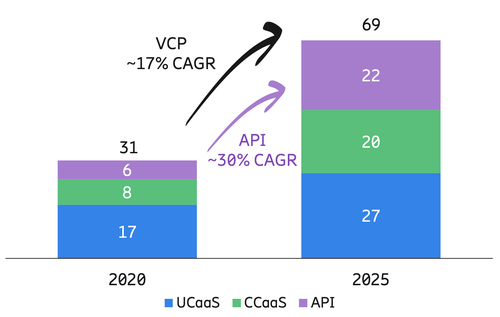 Ekholm's belief seems to be that Vonage's community of about 1.1 million developers can be unleashed on 5G, taking advantage of Ericsson's own 5G expertise. Instead of providing SMS joiners for telcos, they could pivot to 5G network APIs for connecting factory equipment, for instance.

But some experts are not convinced Vonage will necessarily prove so versatile. In an insightful blog, Tom Rebbeck, research director at Analysys Mason, points out that Vonage developers "are used to including a few lines of Vonage code to enable an app to use voice services or send an SMS, quite different services to those enabled by 5G."

Dean Bubley of Disruptive Wireless is similarly skeptical. "It's not obvious to me that a developer doing SMS appointment reminders for dentists is going to suddenly pivot to consuming 5G network slice/QoS [quality of service] APIs, or writing rApps for energy optimization of an open RAN radio network," he wrote in a LinkedIn post shortly after the deal was announced.

Another issue, as far as Rebbeck is concerned, is the need  acknowledged by Ericsson  to ensure APIs are global, open and multivendor. "Nokia, Huawei and other network vendors may not feel that Ericsson is the ideal partner to generate value from network APIs," says Rebbeck. "They have little incentive to cooperate in assisting Vonage-Ericsson in its plans."

The deal also lumbers Ericsson with units that are non-strategic and still account for the bulk of Vonage's revenues. In fact, even the APIs business is not obviously strategic until the Vonage list of APIs includes something about 5G. This all raises questions about the $6.2 billion fee and may have observers asking whether Ericsson could have built a ground-up, 5G-focused APIs business for less.

It is worth noting, too, that Vonage acquired the entirety of its APIs business through takeovers of Nexmo, in 2016, and TokBox, in 2018. The first acquisition cost it just $230 million and the second as little as $35 million, says Crawshaw. After this week's multi-billion-dollar activity, those seem like retrospectively canny moves by Vonage.

Ekholm has proven naysayers wrong before and enjoyed a remarkably successful stint at Ericsson since taking over in early 2017. But shareholders will undoubtedly wonder if the $6.2 billion he paid for Vonage would have been better spent elsewhere. The transaction consumes just about all the net cash Ericsson had on its balance sheet at the end of the recent third quarter. The pressure is on to show that made sense.