Ericsson sees a major opportunity to grow its mobile market share in Europe above a current level of about 30% following recent gains at the expense of Nokia and a backlash against China's Huawei, which was banned this week from selling 5G products in the UK beyond 2020.

Börje Ekholm, the Swedish vendor's CEO, said his firm's ability to meet customer demand during the COVID-19 pandemic proved it had the capacity to cope with "swap-outs" in the UK and other European markets where Huawei could face restrictions.

"There is a lot to compete for," he told analysts on a phone call. "With the volume we have today we are churning out a London a day in radios. We don't believe our capacity is what would limit, with the rate you could drive implementation of our technology in Europe."

Globally, Ericsson's share of the radio access networks (RAN) market has risen by five or six percentage points in the last three years, according to Ekholm, as the company has advanced against "not the Chinese competitors but others."

Huawei, Ericsson and Nokia dominate today's market, accounting for about 80% of all sales internationally, according to some estimates. Ekholm said his company's share of Europe's RAN market is currently "a bit north of 30%." 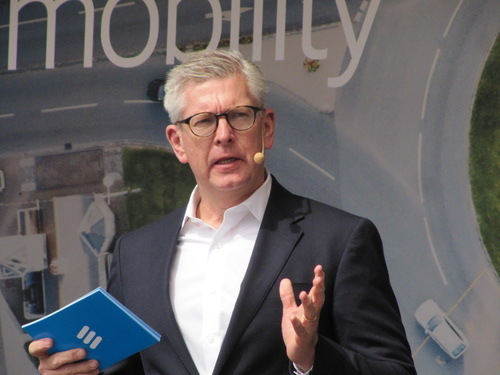 Ericsson CEO Börje Ekholm says Europe is falling rapidly behind China and the US.

The remarks came as Ericsson reported 1% growth in revenues for the recently ended second quarter, to about 55.6 billion Swedish kronor (US$6.2 billion), compared with the year-earlier period. Ignoring takeover activity and currency effects, sales were unchanged year-on-year, despite the impact of the coronavirus pandemic.

The results were ahead of expectations after Ericsson warned in June of margin pressure and an inventory write-down in China, where it has recently landed 5G contracts with each of the country's big operators.

Ericsson's share price soared more than 10% in Stockholm this morning after publication of the results.

In a bid for market share growth, it has shown a willingness to sign RAN contracts that are initially less profitable, insisting the deals are strategically important and will pay off in the long run.

Growth appears to have come mainly in China, with overall revenues from North East Asia up a fifth, to SEK7.8 billion ($860 million), offsetting declines in Europe, Latin America and some other regions.

Anti-Huawei boost
Some of the market excitement about Ericsson may relate to the ongoing US-led campaign against Huawei, currently Europe's biggest provider of RAN products.

Now banned from the UK's 5G market, Huawei has also come under pressure in other European countries where some officials share a US concern about the security of its products.

The backlash is a potential opportunity for Ericsson and Nokia given the lack of alternative vendors and the immaturity of "open RAN," a set of new technologies promising greater interoperability and a role for smaller, more software-based vendors.

Ericsson arguably has a bigger opportunity in the RAN market than Nokia, which is still recovering from problems at its 5G business. Phasing out the more expensive components it mistakenly chose for its initial 5G products is expected to take another two and a half years.

In 2017, Ericsson replaced Nokia as a RAN supplier to Germany's Deutsche Telekom. It has also been phasing Nokia out of Vodafone's network in London.

Swaps at the expense of Huawei have more recently come in Norway, where Ericsson has landed 5G contracts with Telenor and Telia, as well as Denmark, where the Swedish vendor is building a network for TDC.

Europe risks 5G disaster
Despite the momentum, Ekholm today issued a warning to European authorities. "Europe is rapidly falling behind in digital infrastructure," he said. "It is behind in 4G probably by an average of two or three years. That has led to a loss of economic value in Europe as a continent."

"If you look at tech unicorns that leverage mobile infrastructure, they come out of the US or China, with the notable exception of Spotify," he said. "If we are delaying 5G in Europe then we are also hurting the economic future."

In Ericsson's view, those delays have arisen partly because a regulatory desire to auction the spectrum assigned to new 5G services. Amid the COVID-19 pandemic, auctions have been delayed in several important European markets, including Austria, France and Spain.

Ericsson has previously advocated a different method of awarding spectrum, including the use of "beauty contests" that would attach lower fees to spectrum licenses and free up funds for network rollout.

Arun Bansal, the head of Ericsson's business in Europe and Latin America, also this week complained about the difficulty of obtaining planning permits in the UK.

Digital struggle
While performance of the main networks business is encouraging, Ericsson's smaller digital services business is still in the midst of a turnaround as it tries to renegotiate or exit older unprofitable contracts.

Ericsson blamed COVID-19 disruption and a decline in service and hardware sales for a 5% drop in revenues, to about SEK8.6 billion ($950 million). The division's operating loss narrowed to SEK700 million ($77.4 million), from SEK1.4 billion ($150 million) a year earlier.

Executives said the division would miss its profitability target of a low single-digit operating margin this year because of a decision to increase R&D investments in 5G core network products. A 2022 target of 10-12% remains unchanged.

James Crawshaw, a principal analyst at Omdia, said the strong performance in the 5G core market, which accounts for about a quarter of the unit's revenues, implied weakness in the portfolio of operating and business support systems, responsible for roughly 40% of revenues.

"They are not going to make their target of low single-digit EBIT margin for the division this year (pre-restructuring), which they are blaming on accelerated R&D, but it doesn't look like they'd make it with the current run rate of R&D anyway," he said in emailed comments. "Moreover, given that R&D is largely headcount related, I'm not sure how much they can accelerate it anyway."

Carl Mellander, Ericsson's chief financial officer, said the US merger between T-Mobile US and Sprint had reduced the amount of work on offer. Investments in automation and artificial intelligence helped to boost profitability, said Ericsson.

In the tiny emerging business segment, sales fell 4%, to SEK1.6 billion ($180 million), and the operating loss grew from SEK700 million ($77.5 million) to SEK1 billion ($110 million). Ekholm blamed lower sales at Red Bee, the company's media business, and a decision to scrap Edge Gravity, its edge computing offer. "We exited the Edge Gravity business as we did not see long-term value creation," he told analysts.