Dish Network has signed a Master Lease Agreement (MLA) with UScellular for access to the regional wireless network operator's 4,300 towers.

The transaction is noteworthy for a number of reasons. First, it reflects Dish's hunger for 5G coverage across portions of the Central and Western US. UScellular offers nationwide service through its roaming partners, but operates its own wireless network across parts of Illinois, Missouri, North Carolina, Oklahoma, Oregon and elsewhere. 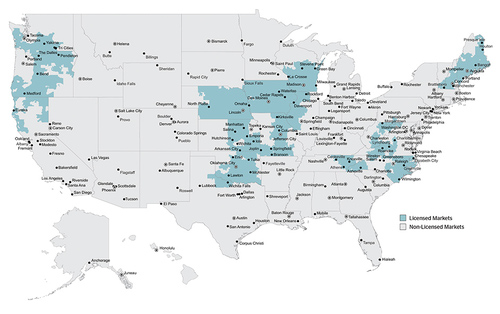 UScellular owns spectrum licenses covering portions of the Central and Western US. Click here for a larger version of this image.
(Source: UScellular)

Dish has already signed agreements with a wide variety of other cell tower companies, including Crown Castle, American Tower, Vertical Bridge and others.

Along those lines, Dish just this week announced plans to raise another $1.25 billion in funding. According to the financial analysts at New Street Research, that cash ought to help Dish reach some of its initial 5G goals.

"Between cash on hand and ongoing cash generation, the company has all the resources it needs to fund the early stages of the network buildout," the analysts wrote in a note to investors this week. "The company will need to raise more capital to fully fund the build, but they will likely do that after proving out their technology platform and its commercialization, starting with its [5G] deployment in Las Vegas later this year."

As for USCellular, its new deal with Dish reflects efforts to make more money from the cell towers that USCellular already owns and operates. And that's a new effort by UScellular.

During the operator's quarterly conference call last week, UScellular CEO Laurent Therivel said the company recently hired Austin Summerford to overhaul its tower strategy. He said the company previously reserved a large amount of space on its towers for its own network equipment, but is now looking to rent more of that space out to other companies.

"I think the Dish deal is the first example of those actions bearing fruit and I expect to see more," Therivel said, according to a Seeking Alpha transcript of his remarks.

"We still see significant unrecognized market value in the [UScellular] towers," agreed the financial analysts at Raymond James in a note to investors.

UScellular is relatively unique in the US wireless industry because it owns thousands of cell towers. Most wireless network operators like Verizon and AT&T have sold off most of their towers and now primarily rent space on towers owned by other companies like Crown Castle.

USCellular disclosed its new agreement with Dish as part of the release of the company's first quarter financial results. UScellular reported total operating revenues of around $1 billion, up from the $963 million it reported in the same quarter a year ago. UScellular ended the period with roughly 5 million total wireless customers.