Here's the one clear takeaway from the first few days of bidding in the FCC's first big midband spectrum auction: In many cases, demand is exceeding supply.

"Demand is currently outstripping supply in many of the largest markets, with New York, Los Angeles and Chicago (Cook County) all having excess demand," wrote Sasha Javid, chief operating officer at BitPath, in a recent LinkedIn post.

Others agree. "This auction is generating a lot more interest because it's midband spectrum that will be very attractive not only for the CBRS networks and services, but also for deploying 5G networks, including backhaul delivery and fixed broadband services by WISPs [wireless Internet service providers]," wrote Bernard Borghei, co-founder and EVP of operations for tower company Vertical Bridge, in response to questions from Light Reading.

According to the FCC's latest auction figures Tuesday, demand for spectrum is greater than supply in around 1,100 of the 3,233 total US counties where spectrum licenses are available.

"While early bidding is not a certain predictor of the ultimate demand, it is worth noting that in the early rounds, the excess demand as a percentage of aggregate demand is on par with earlier auctions, suggesting that such factors as sharing and power limits are not, at least so far, suppressing demand," explained the Wall Street analysts at New Street Research in a note sent to investors over the weekend. 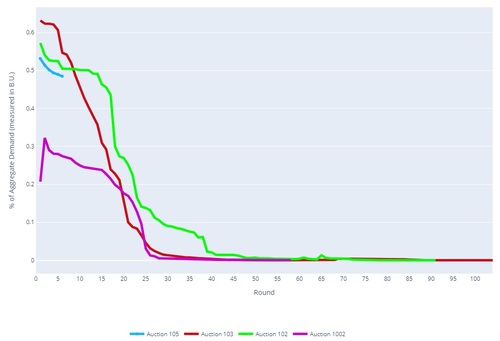 Excess demand as a percentage of aggregate demand in the FCC's ongoing CBRS spectrum auction is roughly similar to recent past auctions. Click here for a larger version of this image.
(Source: Sasha Javid)

However, this situation doesn't necessarily mean that auction bidders are digging deep into their pockets to purchase spectrum. The FCC's 3.5GHz CBRS spectrum auction  dubbed Auction 105  has so far only generated $519 million in total bids after six rounds. Analysts have generally described that auction action as "slow" or "modest."

And it's far less than the $20 billion total generated by the FCC's 600MHz spectrum auction just three years ago. The CBRS auction started Thursday, July 20.

An auction guessing game
But no one knows whether bids in the CBRS auction will increase as participants get more desperate, or if bids will quietly peter out as prices rise. Forecasts for the CBRS auction range from just $1.3 billion to $10 billion in total bids.

"It's difficult to say how much money this auction will bring in because this is an auction that the cable companies are expected to be heavily active in and since it just started it's hard to predict if the activity level will go higher or not," wrote Vertical Bridge's Borghei.

BitPath's Javid certainly sits at the low end of forecasters. "Making predictions on spectrum auctions is always difficult, and is particularly challenging in this case because of the novel nature of the band (due to the spectrum sharing regime and strict power limits)," he wrote in response to questions from Light Reading. "With those caveats, based on some recent prior auctions, one could see Auction 105 bringing in between $1.3 billion and $2.2 billion (with the latter possible should the reduction in excess demand slow)."

Meanwhile, the Wall Street analysts at Raymond James are on the extreme high end of forecasts. "We expect the pace to quicken in the coming weeks," they wrote in a recent note to investors. "It is hard to gauge the final pricing for Auction 105, but it could be in the $8-10B range."

They continued: "As companies ramp 5G deployments across the county, we believe midband spectrum (bands between 1 and 6GHz) like CBRS is critical to providing new services and satisfying increased demand. In addition, we think CBRS spectrum could enable expanded in-building network opportunities and greatly increase the number of private networks in the US."

Meantime, analyst Kyung Mun of research firm Mobile Experts is sticking with the forecast he put out in June of around $3.4 billion in total bids, an increase from his prior forecast from a year ago.

"I believe certain mobile operators will go pretty aggressive," Mun wrote in response to questions. "The competitive market dynamic with T-Mobile looking to extend its midband advantage will push others to expand their midband capacity layers aggressively."

The CBRS auction is America's first to release critical midband spectrum for commercial uses, which is important considering a wide range of industry executives and Washington policymakers have been calling for more midband spectrum in the US for 5G. But the parameters of the CBRS auction don't necessarily offer licenses suitable for widespread 5G services from the likes of Verizon or AT&T.

"The auction ... has been of particular interest for cable operators, as the smaller geographic licenses make it easier to obtain spectrum only in their wireline footprints," analysts at Evercore wrote in a note to investors. "In addition, the nature of the licenses, which limit use to scenarios which don't interfere with incumbent government users, makes them less predictably reliable."

But some are urging auction watchers to look beyond the dollar signs.

Spectrum for new business models
For example, the New Street analysts wrote that "the aggregate amount matters less than the nature and diversity of the winners."

They continued: "The importance here will be determined by other, more subtle metrics. Such metrics would include the extent to which incumbents can use shared spectrum to reduce their cost structure, cable can use CBRS to provide their own wireless services, and new providers who control specific areas, such as universities and office park owners, can use the spectrum to offer niche services. In addition, the aggregate amount may be affected by the proximity of the CBRS auction to the upcoming C-band auction, so the incumbent mobile carriers may not bid as much as they might have if the C-band auction were several years away. In light of these factors, the aggregate number may not reflect the true, long-term impact of the auction."

Predicted Borghei: "Mobile operators will be involved, and some larger enterprises will also compete for specific licenses, but the cable companies, such as Comcast and Charter, are expected to be very aggressive in this auction."

Cable companies are widely expected to bolster their growing mobile businesses with CBRS networks that would reduce the amount of money they owe their MVNO network partners.

As in past auctions, the FCC is not identifying CBRS bidders during the auction, instead only releasing information on which locations are receiving bids, and how much. The agency will keep bidding open until there are no more bids, a process that could take weeks or even months. When there are no more bids, the FCC will close the auction and then, after a few days of review, it will release the identities of the winners. Many expect Verizon to walk away with the bulk of the 22,631 CBRS spectrum licenses up for grabs, with Comcast and Charter bidding for licenses where they already have large numbers of mobile customers.

After the CBRS auction, the FCC is scheduled to begin the C-band auction in December. That event will release dramatically more spectrum than the CBRS auction, and the licenses will not have the kinds of restrictions that CBRS licenses have. As a result, some expect the C-band to be America's biggest spectrum auction ever with as much as $50 billion in total bids. Verizon is widely expected to dominate the C-band auction.