There is unlikely to be anyone at China Mobile telling journalists that a government decision to ban Ericsson would drive up costs and slow down 5G rollout, the consequences that UK telecom executives said would follow a clampdown on China's Huawei.

As citizens of the world's most Orwellian state, China Mobile's nearly half a million employees are not free to criticize government rules on the use of Western equipment vendors  not, that is, unless they want to risk a visit to the Chinese equivalent of Room 101. But if they could speak freely, erudite executives at the state-controlled operator might tell you that banning Ericsson would be classic self-harming behavior.

A retaliatory ban has been a possibility ever since Sweden did as the UK and ruled that no operators securing new 5G licenses would be allowed to buy 5G products from Huawei and ZTE. After Ericsson had issued warnings in its financial statements, the Global Times, a nationalist Chinese newspaper that is effectively a mouthpiece of the state, wrote that Ericsson's "fate" in China depended on Sweden's climbdown. Repeal the ban or the vendor suffers, was the obvious message. 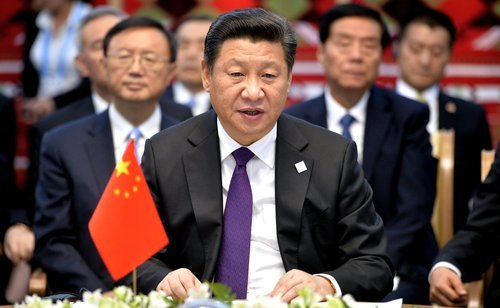 Xi Jinping, China's answer to the Big Brother of 1984.

Signs the risk has increased came this week as Ericsson prepared to issue a new 500 million ($611 million) bond. In its statement about those plans, the company was forced to acknowledge the growing possibility that its Chinese interests come under attack.

"While Ericsson is invited to various ongoing tender processes in China, the final outcome remains uncertain and it is the company's current assessment that the risk has increased that Ericsson will in those tenders be allocated a significantly lower market share than its current market share," it said.

Significantly lower presumably means a lot less than the 11% or 12% that Ericsson picked up during China's first 5G tender last year, when its operators bought about 700,000 5G basestations. That was terrific business for Ericsson. In a year when total revenues were up just 5% on a like-for-like basis, sales to China rose 17%. It would naturally want to retain that market share, or even grow it, during subsequent tenders.

But a Chinese eviction notice would hardly leave Ericsson homeless. Thanks to China's stinginess, the country is not a "bigger than 10% customer," as companies have to tell the US Securities and Exchange Commission when outlining the risks of heavy reliance on a few clients. Last year, Ericsson's entire business in China accounted for just 8% of company sales. About a third of revenues came from the US.

While Ericsson could survive without China, Chinese operators would undoubtedly miss Ericsson. The Swedes were the only Westerners granted any 5G radio contracts in China last year, which means Ericsson's removal would make China even more heavily dependent on its domestic suppliers. In 2015, when Huawei and ZTE were flying high, that would not have been a problem. Six years later, it is.

One reason is that Huawei still has no immediate answer to US trade sanctions cutting it off from component suppliers such as Taiwan's TSMC, whose chips are the most advanced in the world. Right now, it is running down inventory it built up before September, when the latest restrictions came into effect. At some point, it has acknowledged, those stockpiles will run out.

Most analysts do not think China will be able to find a solution before it completes the 5G rollout. To continue supplying its customers, Huawei will probably have to fall back on less advanced components, hurting its competitiveness on the international stage. Denied access to Huawei's biggest rival, Chinese operators might have to settle for lower-quality kit.

"As soon as you put computing functions into the radio, you need to be on the latest process node or you are going to have a very big and bulky radio," said Michael Begley, Ericsson's head of product line RAN compute, in a recent discussion with Light Reading. For both baseband and radio, the Swedish vendor makes use of 7-nanometer technology that can be obtained from only TSMC and South Korea's Samsung.

China's operators are already resorting to less sophisticated equipment because of US restrictions, according to Fahad Najam, an equity analyst with MKM Partners. Najam recently met with Neophotonics, a US maker of optical components that derived nearly half its revenues from Huawei before the trade sanctions were imposed. Its feedback was that "new tenders from the Chinese service providers are for lower-speed sub-400G ports to accommodate Huawei," said Najam in a research note. "For example, Neophotonics noted that China Mobile is upgrading its national backbone to 200G, while many service providers in North America are upgrading to 400G."

The ZTE and Nokia routes

One option for the Chinese is to give ZTE a bigger slice of the cake than it previously enjoyed. Unlike Huawei, it is not currently named on the US Entity List, meaning it is free to do business with US firms and suppliers that use American technology. ZTE has done rather well on US parole, too. Its sales were up 22% for the recent first quarter, when Huawei's fell 16.5%.

The downside for China is that US authorities could probably destroy ZTE with the stroke of a pen. The Chinese vendor's blacklisting in 2018 forced it to cease operations and nearly drove it out of business because of its need for US technology. Another issue might be ZTE's relative lack of scale. As healthy as it currently appears, its $15.8 billion in revenues looks dwarfish alongside Huawei's $138.7 billion. Last year, it had 73,709 employees compared with Huawei's 197,000.

An alternative for China would be to weaken Ericsson while rewarding Nokia, a Finnish vendor whose government has not had the temerity to ban Huawei and ZTE. This would guarantee China's operators access to non-Chinese 5G technology for the next phase of the rollout and boost competition among suppliers.

Yet Nokia missed out in China last year because its 5G products were perceived to be inferior to Ericsson's. It has been working to fix problems and phase out the more expensive components that have hindered its progress. But it does not expect to complete that transition until the end of next year. Despite its growing competitiveness, any decision to substitute Nokia for Ericsson would look counterintuitive.

A likelier outcome is that China makes use of both Nordic vendors to a limited degree. Unless it is prepared to squeeze Chinese suppliers, this would translate into a loss of market share for Ericsson, as the firm warned today. In light of that warning and the recent Global Times report, what cannot be ruled out is that China goes much further and blocks Ericsson altogether.

The Swedish company would rue loss of access to such a vast market. China is important not only from a dollars perspective but also as a testing ground for new technologies, a country with a diverse range of 5G needs. But Ericsson would cope with a ban. In its recent first quarter, as China's 5G rollout appeared to slow down, it did not even count China as one of its biggest five markets, with number five on that list (the UK) accounting for just 3% of revenues.

China's operators, by contrast, face being cut off from the world's most successful non-Chinese vendor of 5G products at a time when their biggest domestic supplier is in turmoil. In the worst-case scenario, network deployment could decelerate badly, dealing a blow to China's economic prospects. Any Chinese telecom executives who put technology and commercial considerations ahead of geopolitics must be hoping for the same outcome as Ericsson  only a lot more quietly.