Three US cable operators  Comcast, Charter Communications and Altice USA  continued to tack on mobile lines in the second quarter of 2021, but they have also "emerged as a force" in the overall post-paid game, MoffettNathanson analyst Craig Moffett reckoned in a new report.

"Assuming a 1% wireless churn rate for Comcast, Charter, and Altice USA  which do not report wireless churn  implies that Cable is now taking 10% of all post-paid wireless gross additions in the US, an extraordinary result," Moffett wrote. "That Cable achieved this milestone without having to match the rich promotions that the incumbents offered makes their share gain even more impressive."

T-Mobile, which has long since salted away its acquisition of Sprint, is now raking in the largest share of US mobile industry gross additions, followed by Verizon and AT&T. 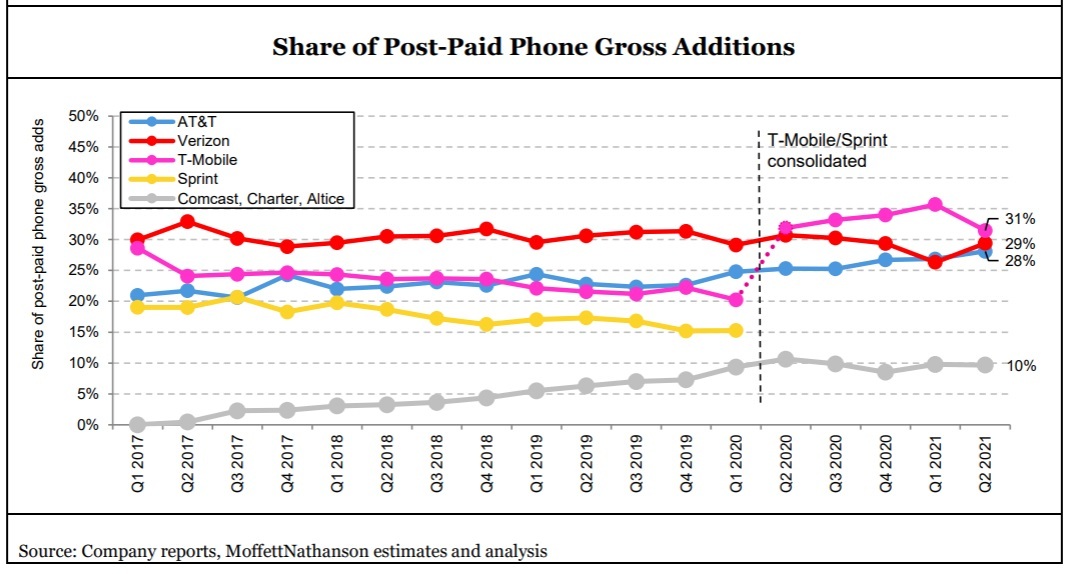 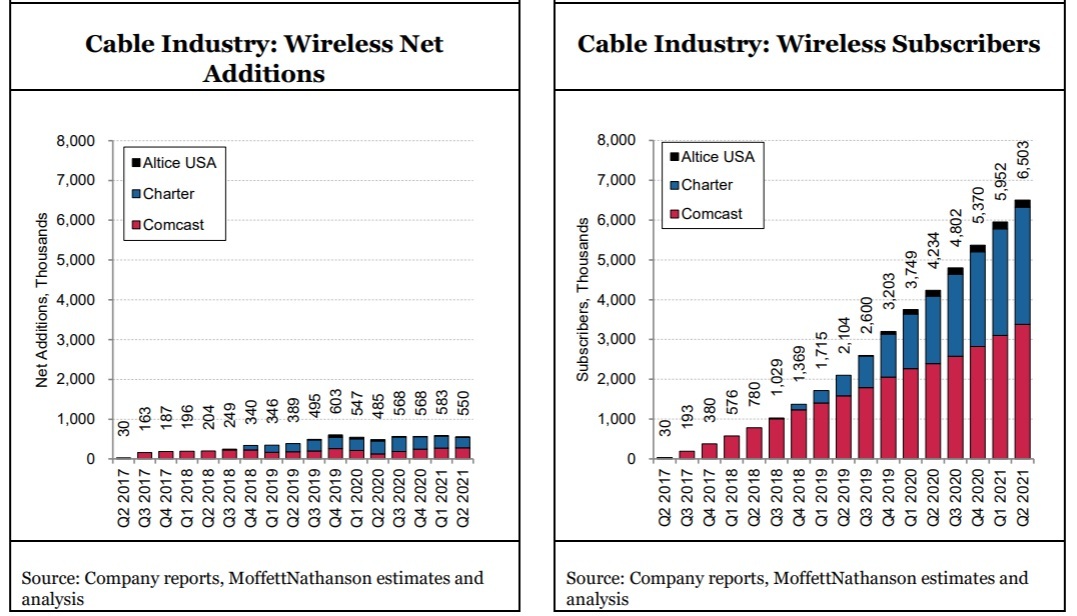 Moffett believes that US cable's impact on the US mobile market has almost certainly been "diluted" by an inordinately high growth rate across all of the major incumbent mobile network operators that have been aided by aggressive promotions focused on the post-paid market.

According to Moffett, mobile subscriber growth in the US has far exceeded population growth, with the industry adding more than 8 million post-paid mobile lines in just the past 12 months alone. "Even after accounting for losses in the pre-paid phone market, the overall growth rate of phone subscriptions in the U.S. is over 5x the annual population growth rate," he explained.

With that inflated overall rate of growth factored in, US cable's total phone net additions in Q2 rose only slightly, to 31.9%.

But Moffett believes US cable is in a good spot if the current growth wave that's benefitted the entire industry doesn't remain constant and begins to recede. On that point, he notes that cable's share of gross adds spiked last year at time in which that share gain was largely independent of the mobile industry's overall net additions growth rate.

"Recall that it was just a year ago that, when the country locked down, industry net additions collapsed and yet Cable's gains were only minimally impacted," Moffett explained. "As a result, Cable's subscriber gains soared as a percentage of the industry. We may well see a replay of this effect when industry growth slows."

In a scenario in which post-paid mobile phone growth were to dip back to 1.5% (from about 2.5% at the end of Q2) combined with typical churn rates, Moffett expects US cable's mobile net adds to stay steady. T-Mobile would still grow in that scenario, but AT&T's growth would nearly flatline and Verizon's would turn "sharply negative" in that scenario, Moffett predicted.

Mobile line growth aside, the profitability of US cable's mobile business has continued to brighten as the business scales. Comcast's Xfinity Mobile business was EBIDTA-positive for a second consecutive quarter, with +$68 million for Q2 2021. The EBIDTA loss for Charter's Spectrum Mobile business shrunk to -$67 million in Q2 2021 versus -$80 million in Q1 2021.

Moffett attributes this better-than-expected profitability trend at Comcast and Charter in part to lower than expected mobile data usage. Citing data from OpenSignal, he notes that the average Xfinity Mobile user consumes just 2.5 gigabytes of mobile data per month, or less than one-third of the average Verizon customer, despite using more data overall. 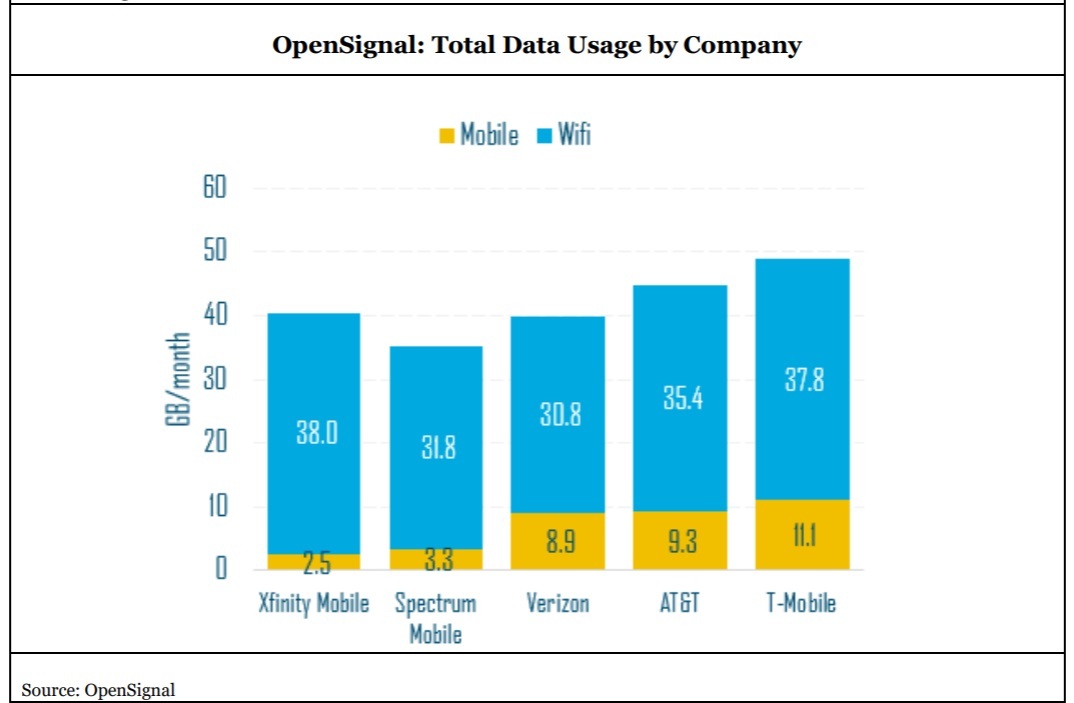 He also attributes some of that gap to Comcast's high mix of customers on by-the-Gig plans, but speculates that Wi-Fi offload is the bigger reason, driven by the fact that all of Xfinity Mobile customers are required to bundle in the cable operator's broadband service. To wit, OpenSignal's data shows that that 93.8% of Comcast's traffic is offloaded to Wi-Fi, compared to 77.6% for Verizon.

"The Charter data is a little less dramatic, but directionally the same," Moffett wrote.