A lifelike avatar of David Attenborough looms out of the virtual undergrowth, the mellow voice of the nonagenarian biologist and broadcaster sounding through your headphones. Pivot left and your smartphone window on this augmented-reality (AR) world shows giant water lilies unfurling, Gila woodpeckers drilling into the green flesh of a cactus, a butterfly landing on the palm of your outstretched hand.

It's also amusing to watch a roomful of telecom journalists lurching around like drunks and nearly colliding as they go off in search of another virtualized natural wonder. Hosted in the former central London home of Tower Records, the Green Planet AR Experience they are enjoying is one of the UK's first demonstrations of "standalone" 5G  what some industry folk would refer to as real 5G.

The "non-standalone" variant that has been rolled out so far hitches a 5G radio to the old 4G core, the control center of the network. Besides boosting connection speeds for customers, and being more energy-efficient to operate, it has brought few obvious benefits. Standalone entails investment in a totally new 5G core. BT, which built the private network for the Green Planet AR Experience, hopes it will be very different. 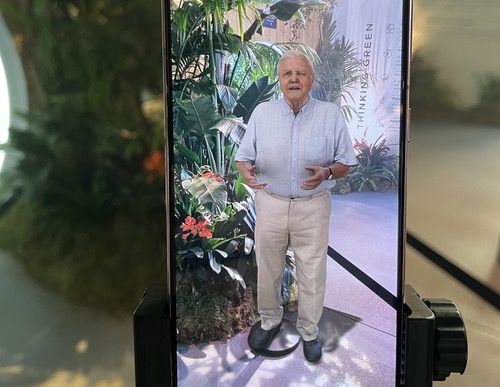 David Attenborough as you've never seen him before.
(Photo by Iain Morris)

While there is not really a service that demands 5G non-standalone technology, and simply cannot work on a 4G network, standalone was needed for the Green Planet AR Experience, BT insists. Using Ericsson's radio and core technology in conjunction with Dell servers, a VMware software platform running virtual machines and high-powered graphics chips supplied by Nvidia, it was able to provide service guarantees for up to 50 simultaneous users.

Latency, a measure of the signal delay, averages 16 or 17 milliseconds for the service. Anything more than 20 milliseconds would be too much for the AR technology, according to the people who built it. The 4G network typically comes with much higher latency, and BT says it would not be able to provide latency and bandwidth guarantees with non-standalone 5G. Stephen Stewart of Factory 42, the company that developed the app, seems to agree.

That all explains why BT is shifting its attention from non-standalone technology, now commercially available across more than 40% of the UK population, to the standalone variant. "The responsiveness of the network allows developers to build new capabilities and features," said Greg McCall, BT's managing director of converged service platforms, at a press briefing today.

"It will be more secure," he added. "We also believe it will be faster and allow us to exploit the 700MHz spectrum we acquired in the auction last year, and that allows us to extend the coverage of the network. We see standalone being the prevalent service our customers migrate to over the coming years."

No urgency, and no public cloud

But this will require a lot of "heavy lifting," said Dave Salam, BT's executive director of mobile networks. The tasks ahead of him include bringing new low-band spectrum into play, extending network coverage and rolling out a new converged core (supplied by Ericsson) that handles both 4G and 5G services.

While BT was the first UK operator to launch non-standalone 5G in May 2019, it does not attach the same urgency to standalone. "We don't expect to be the first operator to market public 5G standalone," said Salam. "What is key is that we don't rush 5G standalone and deliver the best 5G experience when we get there." He reckons BT's launch will happen before the end of the first quarter next year. 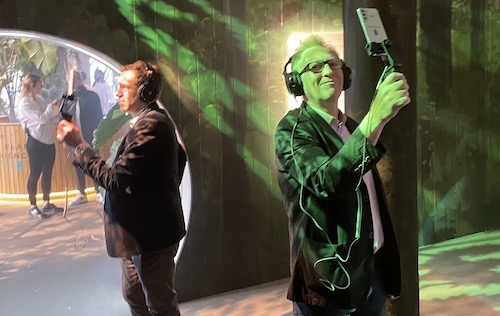 BT is under some pressure on network transformation because its old 4G core comes from Huawei, a Chinese vendor it must evict under government orders by the end of 2027. But its plan is to migrate 5G customers to the new core this year before moving the rest of its subscribers by the end of 2024. If all goes smoothly, it will easily beat the government deadline.

This new standalone core is intended to be "cloud-native," in industry parlance. Essentially, that means heavier reliance on software that can be quickly deployed on cloud-computing platforms. Ideally, that would allow BT to introduce new vendors more easily, although not without dodging the effort of integration, said Mark Henry, BT's technology and business strategy director.

"It is easier than deploying racks and time to market is faster to deploy code," he said. "Software drops every six weeks  we are not there yet but that is the target  but introducing new functions is still a test-and-integration burden. You cannot avoid that."

To realize the full benefits of this overhaul, BT also needs to build a more distributed core, taking advantage of facilities that can be transformed into cloud data centers. Henry thinks a 5G standalone footprint comprising "tens" of these facilities would be sufficient initially for the low-latency services BT needs to provide.

That figure could increase dramatically, though, with the emergence of new applications. "We might distribute the user plane further but that depends on the service we are trying to build and if we need significantly lower latency," said Henry. He doubts BT would ever need more than 1,000 of these "edge" data centers, arguing the difference between 1,000 and 10,000 can be measured in a couple of milliseconds. "It is ten times the cost for a tiny bit of latency gain."

For the time being, BT has also ruled out moving its 5G core into the public cloud, a controversial step that AT&T is taking with Microsoft Azure in the US. "It doesn't make sense to inject someone else's cloud platform into our buildings," said Henry. "We don't see the benefit of putting AWS in there to run network functions. But we are constantly looking at it."

A standalone upgrade is not just about the core, though. BT also needs to enable the technology at radio access network sites by activating the interface between those and the 5G core, according to Salam. Having carried out tests on different configurations in a lab environment, it is now running trials in the Bristol and London areas. Over the next few years, it plans upgrades to around 10,000 radio sites.

Spectrum is critical. In the 3GHz band awarded for use with 5G services, frequencies are quite evenly divided between the UK's four network operators, with Three holding more contiguous spectrum than any other company. But elsewhere BT executives believe they will gain a major "uplink" advantage as they re-farm airwaves at 1800MHz and 2.6GHz.

"We will have 50MHz of 2.6GHz uplink plus 45MHz of 1800MHz uplink, which will probably be the largest carrier aggregation in the world," said Henry. This could be critical, he thinks, in the business sector, where demand for high-quality video and computer vision is likely to put enormous pressure on uplink capacity. 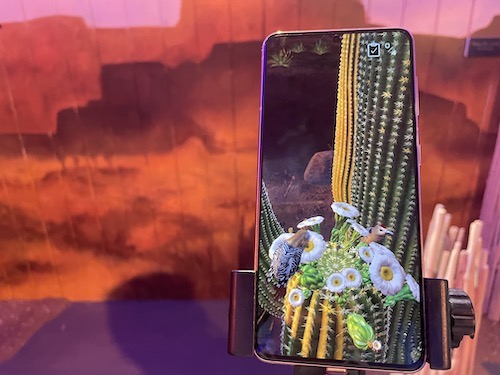 The AR experience would not have worked without 5G standalone, said BT.
(Photo by Iain Morris)

The trouble right now is on the commercial side. "Serious outfits, big operators, are saying we like it, but we still have to work through what exactly the end-customer benefit is," said Gabriel Brown, a principal analyst with Heavy Reading, back in September 2020. A year and a half later, many of the service ideas and business models remain embryonic.

"We need to work in partnerships to make sure we know the pain points of industry, and as part of that we expect to share in the benefits," said McCall today. In the consumer market, BT talks of providing service latency guarantees for online gamers, and yet most games are still played in a residential setting where fiber and WiFi seem more important than 5G. Nor is it obvious that many amateur gamers would be willing to pay higher connectivity fees for a low-latency service.

The lack of devices is also a constraint, and one over which BT has no direct control. It expects new standalone-compatible smartphone models to become available this year, but not in significant volumes until the second half. What operators really crave are new device types that would make standalone seem a bigger deal than non-standalone has turned out to be. "4G sparked the evolution of new services and we are confident 5G standalone will do the same, but not overnight," said Salam.

The Green Planet AR Experience would certainly benefit from a headset or visor instead of a standalone-compatible smartphone, short selfie stick and DJ-style headphones. And watching telecom journalists bumble around like early explorers of the metaverse would certainly provide a laugh.