BT 5G turns one year old with not much to celebrate

First birthdays are usually proud moments for parents, an opportunity to parade their hyperactive, fast-growing offspring before family and friends. For BT's 5G progeny, the anniversary on May 29 was rather more subdued. A year after the UK operator delivered its new service at a flashy press event in London, there was barely a gurgle from the infant on the big day. Next to its older 4G sibling, 5G looks like a late developer.

BT's reticence makes it hard to know for sure. On availability, the only certainty is that some kind of 5G service is now live in 80 cities and towns. For coverage, if not speed, that puts it ahead of UK rivals, according to research carried out by IHS Markit, a sister company to Light Reading. There were also a few words about apps used on the 5G network. YouTube is the most popular, followed closely by Netflix. Facebook, Instagram and Google round out the top five.

But unlike 5G operators in other parts of the world, BT had nothing to say about customer adoption of the 5G service. Quite possibly, it never will. In an affront to transparency, the company stopped reporting mobile customer numbers in the fiscal year that ended in March 2019. It wanted investors to assess it in other ways, it explained at the time, but analysts were not impressed. "Reduced disclosure often, in our view, portends badly for future operational performance," said RBC Capital Markets. BT finished the previous fiscal year with 17.6 million postpaid mobile subscribers, 800,000 more than in March 2017, but its prepaid business had only 5.5 million, about 1.4 million fewer. 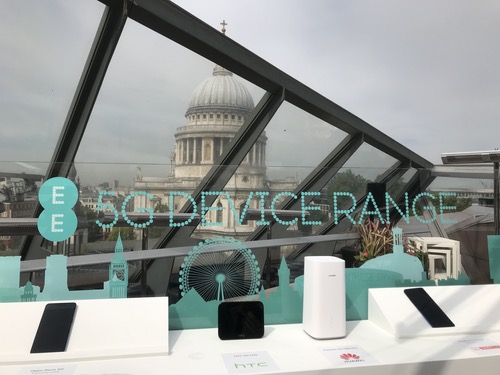 What's more, despite the 5G launch in May 2019, revenues at BT's consumer mobile business fell about 3% in the last fiscal year, to roughly £3.9 billion ($4.8 billion). In the previous one, when 5G was still at the planning stage, they had risen 1%. Average revenue per user (ARPU) has also continued to fall. At the all-important postpaid business, it dropped 4.2% last year, to £20.60 ($25.50) per month. The rate of decline worsened from about 1% a year earlier.

EE, the mobile brand, was far more gushing about 4G in 2013, several years before BT's acquisition. In October 2013, when 4G turned one, the service was available in more than 130 cities and towns, said EE back then. More importantly, it covered about 60% of the UK population and would reach 98% the following year, according to EE. No such data has been forthcoming this time round, and BT representatives declined to share details of 5G coverage or customer numbers. But there is a difference between blanketing neighborhoods with a mobile service and erecting a couple of masts in a city center to claim availability.

Takeup, then, seems unlikely to be near 4G levels when that service was just a year old. Reporting numbers for 2013  back when its fiscal year finished in December  the more transparent EE said it had notched up around 2 million 4G subscribers, meaning about 7% of all customers were using a 4G service. The success of 4G boosted profitability, said the company, with adjusted earnings (before interest, tax, depreciation and amortization) up 10%, to nearly £1.6 billion ($2 billion). At BT's consumer business, which today includes mobile, fixed and TV operations, earnings dropped 5% last year, to around £2.4 billion ($3 billion).

All sorts of problems
Unfortunately, BT's nascent 5G service faces all manner of constraints EE's 4G network did not. For one thing, in a move that outraged the UK's other service providers, EE was given a head start in the UK's 4G market by Ofcom, the UK regulator, which allowed it to use existing airwaves for a launch several months before a 4G spectrum auction. The decision was like starting a soccer match with the score at 3-0 to the stronger side. No such referee favoritism was on display last year. And when Vodafone announced its own 5G service just a few weeks after BT's launch, it revealed some extremely competitive tariffs.

Providing wide-area coverage also looks tougher on 5G networks that operate in higher frequency bands. EE began offering 4G on its 1800MHz spectrum and subsequently picked up licenses for the 800MHz and 2.6GHz bands. When it comes to 5G, BT is using 3.4GHz spectrum it secured during an auction in 2018. The higher the band, the shorter the range of the signal. That could force operators to erect additional masts unless they can overcome these limitations in other ways. While UK authorities intend to license 700MHz spectrum, those plans now face delays because of the coronavirus pandemic and a legal challenge by O2, an operator owned by Spain's Telefónica, over the auction rules.

BT's heavy reliance on Huawei, a controversial Chinese vendor, puts it in a more awkward position than its competitors, too. Regarding the firm as a conduit for Chinese spies, US authorities have been campaigning for its exclusion from European markets and blocking its access to vital components. After deciding in January to restrict Huawei to just 35% of any 5G or full-fiber network, UK authorities are now said to be considering a total ban. The cap of 35% would cost BT about £500 million ($620 million) over the next five years, said BT earlier this year, forcing it to replace much of its 4G network to avoid interoperability problems. A complete ban on Huawei, which is thought to account for about two-thirds of BT's mobile network, would mean an even bigger bill. 5G rollout would suffer.

In the meantime, vandals have been setting fire to UK telecom masts, egged on by conspiracy theorists who say 5G technology spreads coronavirus. How many of BT's have been damaged is unclear, but the operator called out the issue in its latest earnings report. Handset delays are a further coronavirus-related problem. Expected to launch a 5G device later this year, iPhone maker Apple has reportedly had to push back its plans by a few weeks. Other manufacturers may be in the same predicament.

BT's underwhelming update does not come as a major surprise. For years, critics have insisted 5G technology holds limited appeal for consumers and will probably not make a big difference in this market to customer spending. Its real benefits may be seen when it is used in the future to connect things rather than people. Until then, the main attraction for the industry is 5G's efficiency compared with older mobile technologies. To realize that, however, BT needs to shift more of its customers onto the 5G network. That transition could turn out to be more prolonged and painful than anyone had imagined.

Learn How NETSCOUTs Visibility Offerings Assures Service Performance and Delivery in Multi-cloud 5G Networks
Elevate Your Insight Into 5G Voice Services
Download the White Paper: Why Visibility is Needed to Innovate in Your Wireless Network
Accelerate Your 5G Network Launch with Confidence
Is Private 5G Right for Your Company?
More Blogs from Morris Lore
Musk says Twitter has the X factor after all