BlueJeans is an awkward fit for Verizon

Roughly four times what BlueJeans makes in sales each year, the $400 million Verizon has reportedly paid for the videoconferencing business is not the sort of loose change found stuffed into a pants pocket.

It's certainly not going to break the bank at Verizon, which made a net profit of $19.7 billion last year, on revenues of nearly $132 billion. But in the COVID-19 era of frugality, it's an expense that Verizon will be under pressure to justify.

At first sight, the deal looks smart. In a world of lockdowns, self-distancing and minimal travel, videoconferencing services should sell like beer at Oktoberfest. A month ago, when the virus was less widespread, data traffic generated by teleconferencing apps like Zoom and Skype was growing at a rate of about 300% in the US, according to Finnish equipment maker Nokia.

And Verizon's not the only telco raving about the new trend. "We expect the global pandemic will bring about an overall increase in the amount of people who accept collaboration technologies in place of face-to-face meetings as a permanent change to their way of working," said Lorenzo Romano, the managing director of France's Orange Business Services, in a business continuity statement issued today.

But not everyone will be convinced Verizon and BlueJeans fit neatly together. More often than not, Internet applications and operators have looked as incongruous as Mark Zuckerberg and a suit. The deal holds attractions for some because Verizon Business, the part acquiring BlueJeans, can immediately start pitching the platform at its audience of about 25 million mobile customers. Yet that same argument is dredged up whenever a telco buys an application or content company. It hasn't stopped the telecom industry from worrying about dumb pipes and commoditization. 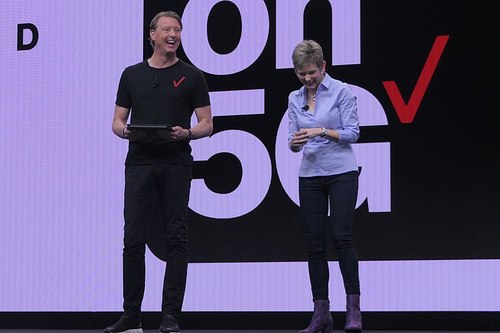 Verizon's big plan is to make sure BlueJeans is "deeply integrated" into its 5G product roadmap. CEO Hans Vestberg, a cheerleader for the 5G standard, reckons this move will appeal in areas like telemedicine, distance learning and field service work. But the mere suggestion BlueJeans and 5G will be as tightly coupled as Vestberg and his Wranglers has already alarmed the net neutrality brigade. Its concern is that BlueJeans will get favorable network treatment over Zoom and other rivals.

Some experts have dismissed that concern. "This net neutrality argument doesn't stack up at all," said Gabriel Brown, a principal analyst at Heavy Reading (a sister company to Light Reading), in a tweet. "I mean, why would an operator that markets itself as having a good network make popular video conf services run worse?" Verizon doesn't offer weaker support for Gmail than it does for the Yahoo mail service it owns, he points out.

This net neutrality argument doesn't stack up at all... I mean, why would an operator that markets itself as having a good network make popular video conf services run worse? Gmail doesn't run worse on VZ than Yahoo email https://t.co/whtUGba0TN

That aside, stuffing Verizon's 5G pipes into BlueJeans may seem like a desperate attempt to make the network technology look useful. BlueJeans, after all, has managed perfectly well without 5G  well enough to have been valued at four times its annual sales, anyway. Granted, the service may function better on a 5G network than a 4G one, but so should any existing Internet application. Will this set a precedent for integrating 5G with applications? Is that what customers want?

Perhaps mobile networks have a bigger role to play in the US than elsewhere during the COVID-19 pandemic. But in the UK, BT witnessed a decrease in mobile data traffic during the early days of the crisis, as usage shifted toward home broadband networks. Mobile equipment giant Ericsson, one of Verizon's biggest suppliers, says most of the worldwide traffic increase is being absorbed by the fixed residential network. In other words, 4G and 5G have become less important since the virus appeared.

It's a fairly safe bet, too, that most of the videoconferencing traffic recorded by Nokia runs over the fixed access network in countries under lockdown. House Morris ran a Zoom-enabled online pub quiz last weekend without any recourse to 4G or 5G technologies. Distance learning, one of the applications Verizon calls out, seems unlikely to need them, either. As for telemedicine and field work, those are fairly niche  although COVID-19 could change all that.

Of course, Verizon doesn't have much of a fixed-line business to holler about. "Fifteen years ago, fixed-line services, including directory publishing, formed Verizon's core, producing $18 billion in EBITDA [earnings before interest, tax, depreciation and amortization]," said Michael Hodel, an equity analyst at Morningstar, in recently published research. "Today, the business is less than a third that size."

Indeed, in the fixed broadband market, Verizon Business had just 489,000 customers at the end of last year, down from 512,000 at the start of 2018, while Verizon Consumer has about 6.5 million. Those numbers are not insignificant, but they are dwarfed by a mobile business that caters to around 95 million consumers in addition to the 25 million subscribers served by Verizon Business. No wonder it's all about 5G.

3GPP Release 17: Completing the First Phase of 5G Evolution
How will Sidelink Bring a New Level of 5G Versatility?
Setting off the 5G Advanced Evolution
Scaling 5G IoT with NR-Light
AI/ML for the 5G RAN
More Blogs from Morris Lore
The 6G mess is getting out of hand