AT&T scores a win over Verizon in mmWave 5G

Verizon has made its investment in millimeter wave (mmWave) 5G a centerpiece of its overall strategy  and its marketing message  for years now.

The operator has spent billions of dollars collecting mmWave spectrum licenses, publicly set deployment targets for mmWave transmitters, provided detailed mmWave coverage maps, and has even discussed how much traffic it expects to transmit over its mmWave network in the months to come. Specifically, Verizon expects to double the number of its mmWave transmission sites this year to around 30,000, and it hopes to transmit up to 10% of its total mobile network traffic in populated, urban areas over mmWave connections by the end of this year.

Indeed, Verizon's support of the mmWave flavor of 5G was on full display last year when the operator's CEO discussed the technology during Apple's launch of its first 5G-capable iPhone, the iPhone 12.

In contrast, AT&T and T-Mobile executives have offered only passing references to their respective mmWave 5G networks, and neither offers much detail on their mmWave network coverage or performance.

And that's why Opensignal's latest findings are so noteworthy.

US mobile data traffic, by technology 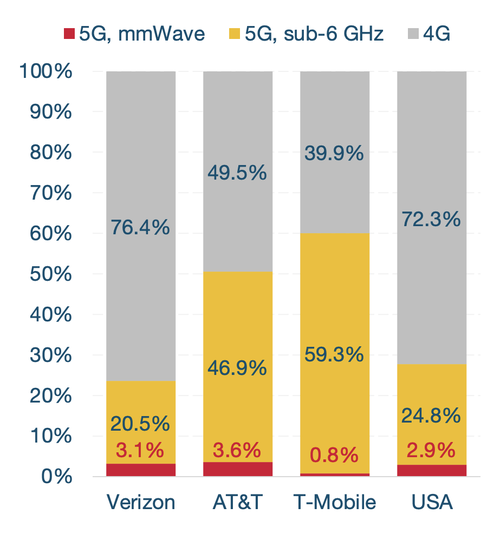 According to Opensignal, AT&T leads in the percentage of data consumed on its mmWave network, at 3.6%. The firm said it tracked data usage among customers in mmWave coverage areas who owned mmWave-capable devices. The firm's findings cover the month of July, and exclude data on 3G and 2G networks. Click here for a larger version of this image.
(Source: OpenSignal)

Opensignal's data shows that AT&T mmWave users consumed 3.6% of their data using mmWave in locations where mmWave was available compared with 3.1% with Verizon.

"This indicates that our AT&T mmWave 5G users on average spent a lower amount of time connected to mmWave 5G compared to our mmWave 5G users on Verizon, but when they did connect to mmWave 5G, they consumed a much larger amount of data," the network-monitoring company wrote in a new post to its website. "Therefore, Opensignal data suggests that, while Verizon has made the most effort to expanding its mmWave 5G service, AT&T appears to have focused on limited high-traffic areas  including selected venues and airports  where users benefit even more from mmWave 5G's vast capacity and consume even more data as a result."

However, OpenSignal's Ian Fogg explained that, because there are both many more locations with mmWave on Verizon and many more Verizon mmWave users, the net data volume going over mmWave is much greater on Verizon than on AT&T.

The findings come at an important time in the development of mmWave 5G networks. In the US, 5G operators in general have been shifting gears away from mmWave and toward midband 5G. That's no surprise considering midband spectrum covers far more geographic territory with speedy connections than mmWave spectrum.

Globally, the mmWave situation also appears tenuous. For example, Apple's newest iPhones don't appear to support mmWave 5G outside of the US, and reports from South Korea appear to indicate tepid support of mmWave networks among operators there.