AT&T, Verizon and T-Mobile have all benefited from outsized customer growth during the past year or so, with each adding a bonanza of new subscribers every single quarter. However, there are strong indications that this exaggerated growth will slow during 2022.

That has left all the big 5G network operators in the US looking for other sources of revenue growth. It appears they have found an answer: trying to squeeze more revenue from their existing customers by encouraging them to "step up" to more expensive unlimited plans, including those with speedy 5G services.

AT&T executives are counting on more revenue from existing customers as well. "We expect to continue moving up the ARPU [average revenue per user] stack," AT&T CFO Pascal Desroches said during an earnings call this week. He explained that AT&T's "Elite" unlimited plan is the carrier's "highest-priced ARPU plan and it's our fastest growing."

AT&T and Verizon set 2022 growth targets for wireless service revenue based partly on their ability to encourage existing customers to sign up for more expensive unlimited plans.

Some analysts are onboard with this idea. For example, the financial analysts at Cowen noted that only one out of every three Verizon customers owns a 5G phone. That leaves "ample runway for continued buy-ups and subsequent ARPA [average revenue per account] growth as [Verizon] seeks to achieve its 3%+ organic growth," they said.

But other financial analysts aren't so sure. For example, J.P. Morgan analyst Philip Cusick downgraded his opinion of Verizon's stock, warning that he's "increasingly concerned about the subscriber growth outlook," according to MarketWatch.

And the financial analysts at Sanford C. Bernstein & Co. pointed out that AT&T's ARPU actually declined 0.5% in its fourth quarter, "beginning what is sure to be a period of greater declines."

The flavors of unlimited

In a recent survey of roughly 1,000 mobile customers, the financial analysts at Cowen found a record number of "unlimited" subscribers. Those are customers who have signed up for a provider's plan that doesn't meter their usage. 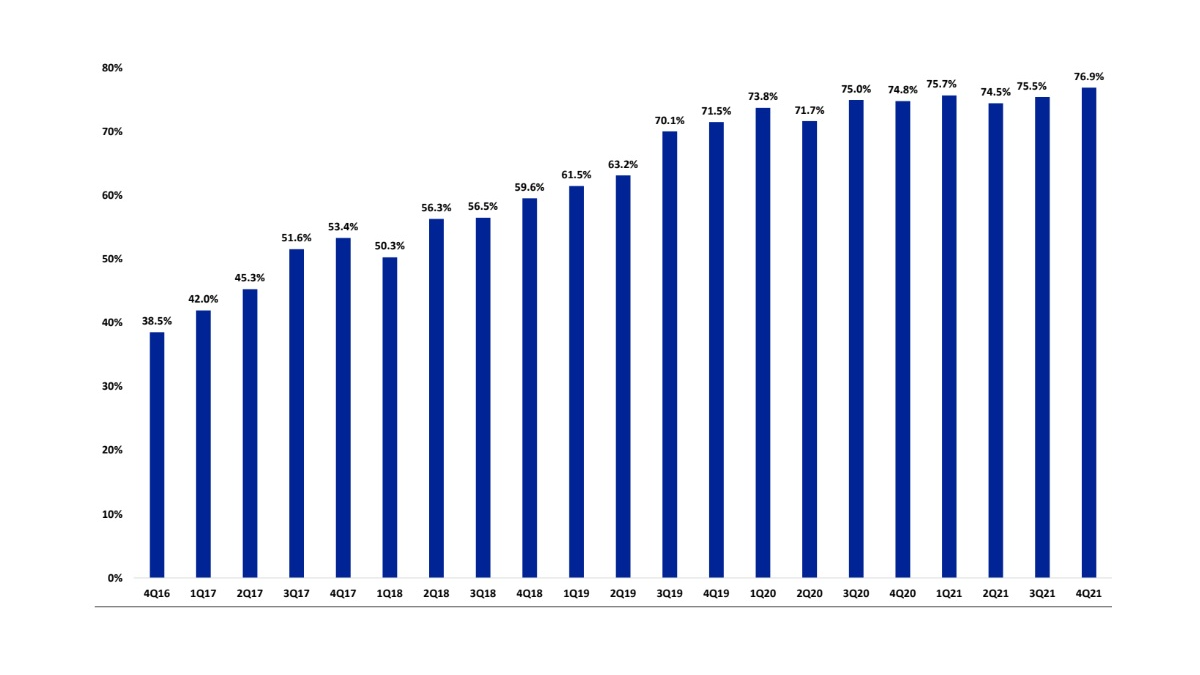 In a survey conducted in January, the Cowen analysts found that 76.9% of respondents on postpaid services said they subscribed to an unlimited data smartphone plan. Click here for a larger version of this image.
(Source: Cowen)

"All of the carriers see unlimited uptake and plan buy-ups within unlimited as key drivers of ARPA [average revenue per account] and service revenue growth," the analysts wrote in a recent note to investors. "Further penetration of unlimited adoption also places a continued heightened importance on network capacity, as we note unlimited subs consume more than 2x the amount of data than usage-based subscribers."

However, most such plans aren't truly "unlimited." Instead, they often slow down users' speeds after they consume a certain amount of data per month, or during times when there is a lot of network traffic.

Recently, operators have been working to flesh out their "unlimited" offerings with a variety of different perks and options. Verizon, for example, offers four different unlimited data plans. The carrier's "premium" plan provides free access to the Apple Music streaming service, while its cheapest option does not.

Each carrier is hoping to entice new and existing customers to "step up" to more expensive  and more profitable  unlimited plans.

Perhaps not surprisingly, each operator is also leveraging the additional speed and network capacity created by 5G to juice the sale of its "premium" unlimited plans.

T-Mobile, for example, has promised to remove speed throttles from its most expensive unlimited plans. Thus, customers on T-Mobile's cheaper "Essentials" unlimited plan might have their speeds slowed after they consume 50 GB in a month, but customers on T-Mobile's more expensive "Magenta Max" plan don't face that stipulation. T-Mobile has attributed the move to the additional network capacity created by 5G technology.

In its new plans, AT&T is employing a similar strategy. The operator boasts that customers on its new "Elite" unlimited plan can get "high-speed data that can't slow down based on how much you use."

Verizon's unlimited data strategy is even more nuanced. Its cheapest plan, 5G Start, warns customers that speeds may be slowed when Verizon's network is busy. But customers on Verizon's most expensive plan, 5G Get More, don't face that stipulation.

Further, Verizon isn't offering the "Ultra Wideband" version of its 5G network to customers on its cheapest unlimited plan. Instead, those customers only get access to the operator's "5G Nationwide" network.

Importantly, regulators aren't standing still. The FCC is looking into rules that would require Internet service providers to clearly outline the contours of their pricing options and their service plans.