Spending commitments do not come much bigger than Apple's pledge this week to invest a colossal $450 billion in the US economy over the next five years. The world's largest public-sector company by market capitalization  currently worth a hard-to-believe $2.2 trillion  has promised "tens of billions" for next-generation chip development and 5G.

That part of the announcement taps into US fears about a chips shortage, overreliance on Asian manufacturers for high-end semiconductors and falling behind China in 5G. The overall figure is also about 20% more than Apple had promised in its last five-year plan dated 2018. Sales were up just 5.5% in Apple's last fiscal year. Unless the iPhone giant is about to sacrifice margins in the interests of US technology independence, this reads like a confident bet on its future.

The details are pretty thin, however, and the headline amount seems to include everything from investment in research and development (R&D) to spending with suppliers and the refurbishment of data centers. For context, Apple spent about $71 billion on R&D alone in its last five fiscal years. That means if other technology giants measured their contributions this way, they could flaunt similarly impressive numbers. 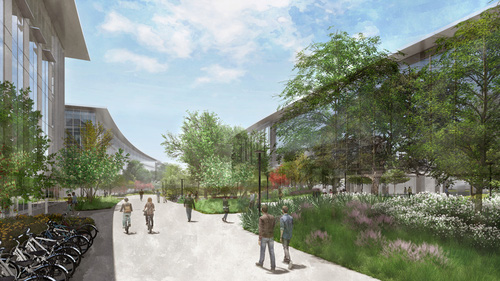 Apple's 'artist's impression' of a new campus in Austin, Texas.

Moreover, the pace of employee recruitment at Apple is actually set to fall. In the five years to September 2020, Apple's workforce grew by 31,000 employees, according to filings with the US Securities and Exchange Commission. Over the next five, as part of its $450 billion scheme, Apple plans to hire another 20,000. If that were a net increase, it would have 167,000 employees by late 2025.

What all these new recruits will be doing is not entirely clear. "We're creating jobs in cutting-edge fields  from 5G to silicon engineering to artificial intelligence  investing in the next generation of innovative new businesses, and in all our work, building toward a greener and more equitable future," hummed CEO Tim Cook in his prepared comments. Yet these cutting-edge roles seem to be included in the 2.7 million jobs Apple claims to support through its spending with US suppliers and its developer ecosystem.

Carolina in my mind

That said, Apple has specifically called out a $1 billion investment in North Carolina, where it says a new campus and engineering hub will create at least 3,000 jobs in the areas of machine learning, artificial intelligence, software engineering and "other cutting-edge fields." It has clearly become a lot more than just a maker of expensive gadgets that rely on components developed by others. Used in the latest iPhone, its A14 Bionic chip is based on 5-nanometer technology that only TSMC, a Taiwanese foundry, is currently able to supply. In June last year, Apple also announced plans to replace Intel chips in its computers with its own technology.

Such moves by a powerhouse like Apple obviously have an important knock-on effect for other technology firms. Chips designed by Apple need to be turned into physical components, a job that could be done on US soil in the future. Intel is investing $20 billion in US facilities that will, like TSMC, make chips designed by other firms. TSMC, meanwhile, has also responded to a US government invitation to build new fabs in the US. 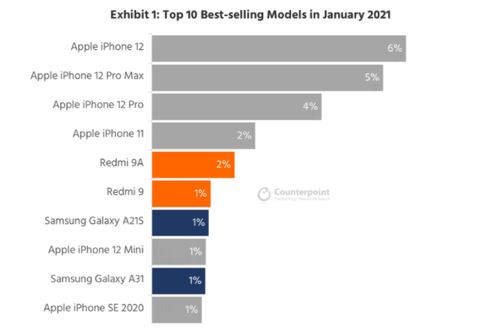 Apple's influence in 5G has probably been underestimated by people who say the US lags China partly because it lacks a Huawei equivalent. While the US no longer has a Tier 1 vendor of network equipment, chips, gadgets and services are equally important to 5G. The release of the 5G-compatible iPhone 12 was keenly awaited by operators as a potential catalyst for service adoption. In January, the iPhone 12 was the world's best-selling smartphone, according to Counterpoint Research.

If there are questions about Apple's strategy, they are usually about its heavy reliance on the iPhone as a source of revenue, and what might become of Apple in a post-smartphone future. But diversification is paying off. Just half of the company's sales came from the iPhone in its last fiscal year, down from 62% in 2018, as the services business assumed a far bigger role. Today's commitments should help to uncover new sources of growth. In the meantime, the world's love affair with the smartphone shows very little sign of coming to an end.