PARIS -- Some of France's biggest organizations, including carmaker Renault and rail authority SNCF, have given 5G technology the ringing endorsement it has so desperately needed from the companies that are expected to use it.

Senior executives from companies in various sectors backed the next-generation mobile technology as a major spur to productivity and French industrial advantage at a conference in Paris today hosted by Orange, the French telecom incumbent that hopes 5G will become the next big growth opportunity for its own business.

Guillaume Pepy, the president of SNCF and chairman of Eurostar, said 5G technology would allow France's national rail authority to increase the number of trains running on today's tracks by 45% without putting safety at risk. SNCF is already planning to run 20% more trains between France and Lyons by using 5G-based monitoring systems so that trains can run more closely together than is currently possible. 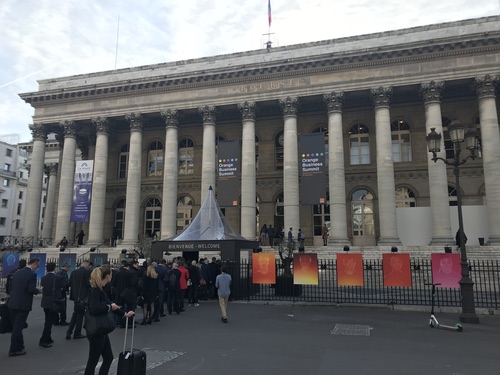 Outside the venue for Orange's conference about 5G services in the business sector.

Amid doubts about the future importance of 5G in self-driving cars, Jean-Philippe Bahuaud, the vice president of strategy for Renault, also backed the mobile technology, and the short signaling delay it promises, as an essential component of the carmaker's plans.

"You can have autonomous vehicles without 5G but there are lots of sensors and you need to exchange data with various networks," he said during a panel session in Paris this morning. "If you have a vehicle connecting with urban street furniture it needs a short time lag for safety reasons. We have zero tolerance for that kind of risk."

The comments will intrigue observers as European stakeholders battle over the standards used in connected cars. The European Commission is currently under pressure from 5G proponents not to back a WiFi-based standard favored by some carmakers. Despite Bahuaud's endorsement of 5G, Renault is reported to be in the WiFi camp.

Telecom operators have long touted 5G as an opportunity to address new service needs among business customers. But the comments by senior figures at SNCF and Renault are perhaps the clearest indication so far of industrial demand for the mobile technology.

They might also help to silence a few of the critics who say 5G is all about enhanced mobile broadband services and that compelling "use cases" outside the mainstream consumer market have been in short supply.

There is already some pressure on Orange to show that it can deliver the 5G service capabilities that France's industrial groups are demanding. France Industrie, the association that represents the interests of companies in numerous sectors, has put pressure on Stephane Richard, Orange's CEO, to build a 5G network that covers all the country's industrial zones.

"We have spoken to Stephane and we need  massive deployment that covers the whole French territory," said Philippe Varin, France Industrie's president. "We need to scale this up depending on requirements and that means 136 industrial territories all need to be covered. There needs to be a clear roadmap drawn up with the government."

Can Orange measure up?
Building such a 5G network on a national scale would be a huge challenge for any mobile operator. Most analysts expect European operators to spend several years rolling out 5G technology, concentrating initially on hotspots in city centers and other areas of high demand.

Helmut Reisinger, who as CEO of Orange Business Services would be ultimately responsible for addressing the 5G needs of enterprise customers, told reporters that Orange would target business demand when it deploys 5G, in contrast to the approach taken in the US market.

"It is likely this network buildout will be different. It is B2B-driven and can be focused," he said. "The US is doing a great thing because they have FWA [fixed wireless access] issues. That is not a real topic in Europe and where we can play strong is with a combination of industrial know-how and technology."

As an FWA technology, 5G would be used to provide residential broadband services in communities that do not have access to high-speed fixed lines. Reisinger thinks about 12.8 million US households fall into this category.

Agnès Pannier-Runacher, a junior French government minister, piled further pressure onto Orange by saying that coverage and service quality commitments would be important obligations for the operators that win spectrum in a forthcoming auction. "We need to be ahead of the curve and make sure we can talk about business models of the future right away," she said.

Governments around the world are taking a keen interest in 5G because of its potential to boost productivity and deliver a competitive advantage for local industries over their foreign rivals. "We need to mobilize industry," said Pannier-Runacher. "There will be some reluctance and we have to work on that."

Varin said France Industrie was also looking to Orange to help resolve the standards debate. "You can't have standards for driverless cars in France and different ones elsewhere," he said. "You need uniform standards."

He also wants to see a more developed ecosystem around 5G services and expects France's telecom operators to provide training on digital technologies to industrial groups. "There is a huge amount of work that will have to go into this," he said, citing figures that suggest only 20% of French companies have taken advantage of digital tools.

Orange in response is promoting the concept of "co-construction" as it develops its 5G plans. "We have to work together. There is no point in waiting for deployment in 2021 or 2022. We have to make sure France is not lagging behind with 5G," said Richard.

Kester Mann, the director of consumer and connectivity for analyst firm CCS Insight, welcomed Orange's update as a "longer-term" and "more pragmatic" approach to 5G than operators in some other countries have taken.

The challenge for the French operator, he said, would be to show that it can deliver on its vision. "Partnering with companies such as Renault and SNCF is a move in the right direction, but to really unlock the full potential of 5G operators and industry need to work far closer together in order to identify future uses that will justify the vast investments required."