5G boosts revenue growth in US, China and South Korea

According to new figures from Strategy Analytics analyst Philip Kendall, operators' 5G networks are broadly contributing to mobile service revenue growth in markets including the US, China and South Korea.

The figures provide some needed context in the discussion of 5G. The technology received a massive amount of hype in its initial years, but early returns were less than inspiring. This forced some operators to backtrack from plans to charge extra for the technology and instead add it into premium unlimited data plans.

Nonetheless, the technology has contributed to a reverse in the decline of mobile network operators' service revenues globally, according to Kendall's new findings.

"Mobile service revenue is currently increasing 3-4% per annum (levels not seen since 2012) and 5G is one, but not the only, factor contributing to this improved performance," Kendall wrote in a new post to the Strategy Analytics website.

Kendall confirmed to Light Reading that revenue growth is reflected across three leading 5G markets: the US, China and South Korea. Specifically, he said there were 104 million live 5G connections in the US at the end of March 2022, representing 27% of the market. Those figures are in line with South Korea (31%) and China (25%).

All those 5G phones "delivered a significant boost to revenue performance," he argued, noting that operators' mobile service revenues were falling prior to widespread 5G launches but are now growing. 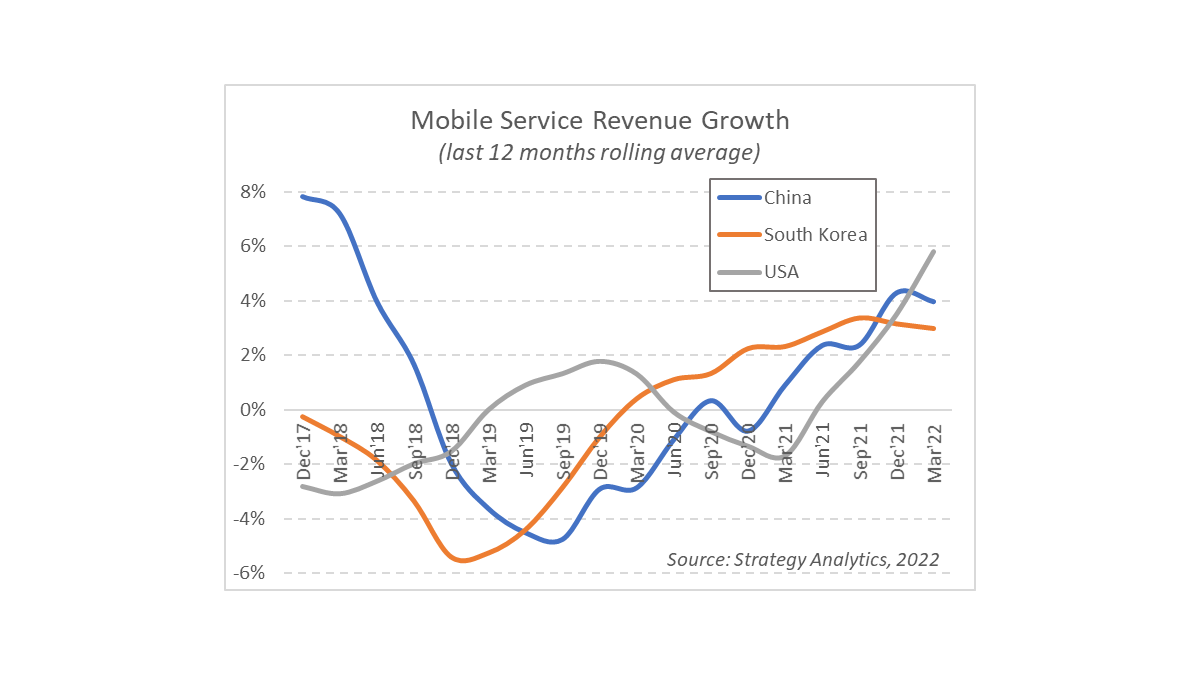 There are some caveats, addendums and stipulations to include with Kendall's calculations. First, as Kendall notes, 5G isn't the only factor affecting revenues. And beyond the calculations, other factors play in, from cultural differences (South Koreans often pride themselves on their technological savvy) to political issues (the Chinese government has helped push operators there to deploy 5G).

Moreover, the US market for 5G has evolved much differently than the Chinese and South Korean markets. For example, Kendall pointed out that SK Telecom's Ifland metaverse platform already has more than 1 million monthly active users, with each spending over an hour per visit in the operator's virtual world. And in China, Strategy Analytics has counted more than 4,000 private 5G networks.

The US, meantime, trails significantly in both of those sectors. However, Kendall pointed out that US operators are focusing on fixed wireless access (FWA) to a much greater degree than their Asian counterparts.

Analyst Mark Lowenstein, with Mobile Ecosystem, recently wrote in FierceWireless that the 5G market in the US is "playing out differently than many predicted." He pointed out that much of the early US interest in millimeter wave (mmWave) spectrum has subsidized, and that so far there are no real signature 5G apps that make use of operators' networking investments.

Lowenstein also noted that network slicing  a much discussed feature of 5G that requires the standalone version of the technology  hasn't yet hit the US market and probably won't until 2024 or 2025.

Another surprise in the US 5G market: "Much of the messaging from the operators and other mobile ecosystem players is that the best long-term revenue opportunities in 5G will come from the enterprise market," Lowenstein wrote.

Into the 5G future

Finally, much of the recent discussion around 5G in the US centers on inflation and its potential impact. Already Verizon, AT&T and T-Mobile have moved to raise service prices and fees  and AT&T's CFO recently suggested that the operator may not be finished hiking prices.

"The industry hasn't seen price increases for a long time," wrote the financial analysts at MoffettNathanson in a recent report for investors. However, the analysts also noted that there are signs that the outsized growth in wireless postpaid customer net additions in the US will slow.

"The slowdown in growth portends escalating, not de-escalating, competitive intensity," they argued.

Other analysts have signaled similar concerns.

"While the price hikes will shore up the top lines, we remain skeptical on the durability of EBITDA [earnings before interest, taxes, depreciation, and amortization] margins amidst a challenging economic backdrop and an increasingly competitive postpaid phone environment," wrote the financial analysts at Cowen in a recent report to investors.