According to the country's telecoms regulator, and reported by the financial analysts at New Street Research, South Korean operators reported the addition of 800,000 new 5G customers in August  a 64% increase from the previous month. The New Street analysts noted that this is the second-highest level of 5G customer growth since the technology was first launched. 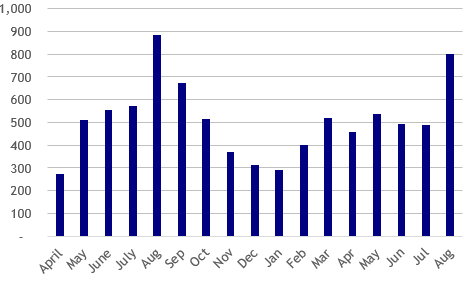 The New Street analysts noted that the Samsung Note 20 was released during the month, likely juicing demand.

"We would expect continued strength in net [customer] adds in the coming months, particularly with the Apple launch expected some time within the next month," the analysts wrote in a report to investors this week. Indeed, Apple Tuesday announced it would host an event Oct. 13 where it is widely expected to announce its 5G iPhones. The company's invitation to the event sported the phrase "Hi, Speed."

As for South Korea's overall 5G progress  largely dominated by SK Telecom  the New Street analysts wrote that the country's sales of 5G represent a positive for the global industry.

"Our positive view on the Korean industry is predicated on solid 5G demand with the services being priced at a premium to 4G," they wrote. "The August data confirms that 5G demand remains intact and 5G tariffs are to date remaining stable providing a 20% uplift to ARPU [average revenue per user]. As a result, we continue with our positive view on the industry."

South Korea is just one of dozens of countries where operators have launched 5G. There are now more than 110 million 5G subscribers and 560,000 basestations in China, according to the country's Ministry of Industry and Information Technology (MIIT).

Globally, Ericsson reported that 5G subscriptions with a 5G-capable device grew by around 50 million during the second quarter to reach a total of about 80 million around the world.

And analyst firm Omdia  which is owned by Informa, the same company that owns Light Reading  reported that 5G subscriptions doubled in the second quarter to reach at least 137.7 million globally, representing 1.5% of the entire global mobile market. The figures were posted by the Global mobile Suppliers Association. 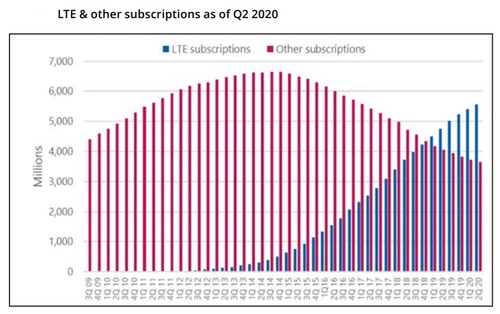 5G subscriptions are expected to continue to grow. Click here for a larger version of this image.
(Source: Omdia, via the Global mobile Suppliers Association)