Rakuten's mission to upend Japan's mobile market already looked like a sumo-sized challenge. But it just grew even bigger. The Japanese e-commerce giant today added about $2 billion to its capital expenditure budget for network construction. It had previously planned to spend about $5.7 billion on 4G rollout. The latest update fattens that figure to between $7.4 billion and $8 billion.

The explanation provided by executives today is that Rakuten needs additional basestations to improve service quality. Under its initial plan, it believed exactly 27,397 would suffice for population coverage of 96%. Now it is looking at the deployment of about 44,000. It is an increase that clearly worries analysts and investors, already concerned that Rakuten Mobile is struggling to make an impact. 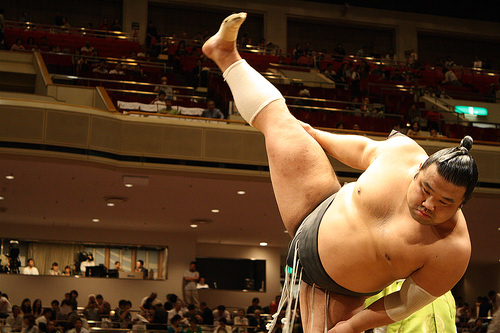 The rationale is that Rakuten needs this densified network to cope with expected growth in customer numbers. New pricing plans, providing even lower-cost services to Japanese consumers, have boosted applications fourfold, said CEO Hiroshi Mikitani, on a call with reporters and analysts today. Additional subscribers would obviously chew into network capacity.

But the numbers are still much lower than many were expecting. In December, eight months after launch, Rakuten boasted just 2 million "applications" for a service. By February 8, in a sign of recent momentum, that number was up to about 2.5 million. Yet even with a sustained fourfold increase in demand, Rakuten would be on track for no more than 13 million customers by the end of this year. New Street Research does not expect it to hit that figure until 2028. And alongside market leader NTT DoCoMo, with its 80 million subscribers, it would still be a tiddler.

The basestation plan could have something to do with Rakuten's 4G spectrum constraints. Last month, after analysts noted a deterioration in service quality on Rakuten's network, it told reporters that Japan's Ministry of Defense is still squatting on most of its 4G spectrum. In the 1.7GHz band, it has a 20MHz nationwide allocation, about a fifth as much 4G spectrum as any rival, and just 5MHz of this is available across most of Japan. It does not expect to evict the Ministry of Defense until the end of this year. Site densification would make up for a spectrum shortage.

But it somewhat undermines the case Rakuten has made for its new-look technologies. By simplifying designs, and removing some of the equipment used in traditional mobile networks, Rakuten has claimed it can improve coverage per site by 30-40%. 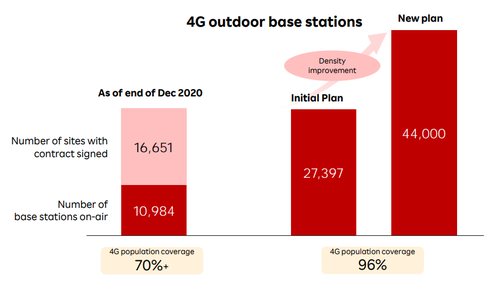 In fairness, even with 44,000 sites providing 96% coverage, Rakuten would probably have far fewer sites than its rivals. Covering a market like Japan would normally require about 100,000 sites, said Tareq Amin, Rakuten Mobile's chief technology officer, during a call with reporters last November. Rakuten has long maintained that it would probably finish its rollout with between 40,000 and 50,000 mobile sites altogether.

Unfortunately, though, Rakuten could not today provide any reassurance that capital expenditure forecasts will not spike again if customer growth is sustained. "If the trend continues then the current capex will not be enough, but if the subscriber growth is to continue into the future we will be the biggest mobile telco provider in ten years' time, and maybe earlier, so it will depend on the number of subscribers," said Mikitani. "We may or may not need to increase capacity, but it is a happy and expected turn we have to make."

Rakuten had previously put the cost of all network construction in Japan at about 800 billion Japanese yen ($7.6 billion), according to MoffettNathanson. After today's announcement, the full bill is approaching JPY1 trillion ($9.5 billion). And rollout costs are weighing heavily on group financials. Despite a 15.2% increase in sales last year, to about JPY1.46 trillion ($13.9 billion), Rakuten made an operating loss of JPY102.7 billion ($980 million), after recording a profit of JPY95.1 billion ($910 million) in 2019. The rest of Rakuten is suffering because of its increasingly expensive mobile project.

The company's goal is for the mobile business to break even in 2023, but it refuses to share any more details about mobile profitability or forecasts. Even before today's bombshell, analysts were sounding unconvinced. "We do not think the company can hit its target of EBIT [earnings before interest and tax] break even by 2023 and in fact forecast continued losses of $1.5 billion in that year," said New Street Research in January. "This implies the whole group remaining loss-making for much longer than the market generally anticipates."

One thing's for sure  Rakuten will have to work even harder to persuade naysayers that its high-profile mobile project is not heading for a sumo-sized upset.