The previous October, Chesky (now the company's chief executive) and Gebbia couldn't afford their rent in San Francisco. But there was a run on the city's hotel rooms because of an Industrial Designers Society of America conference.

So the flatmates purchased three air mattresses, and had three guests stay on the first night of what they initially named "Airbed and Breakfast." 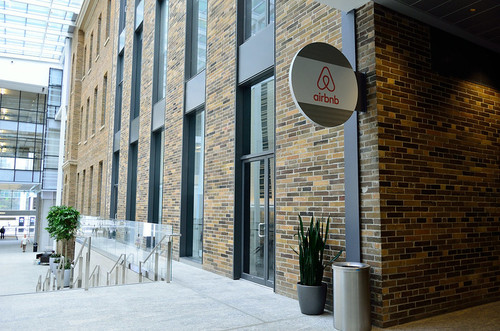 In public markets, after yesterday, it now increasingly seems 2020 will be remembered for two things: the "Nasdaq whale" caused by SoftBank Group's tech stock buying spree, and Airbnb's initial public offering, which saw its valuation jump to over $100 billion.

Chesky was in the middle of an interview when he learned Airbnb's share price had doubled from an IPO price of $68 to a first-day close of $144.71 on the Nasdaq exchange.

It is a stunning recovery for a company which posted a net loss in 2019 and then saw its revenues ravaged when the pandemic largely halted travel.

But then Airbnb made a surprise profit in the third quarter, as global lockdowns eased and users increasingly wielded the site to find homes to rent away from major urban areas.

2020 has been the busiest year for US public offerings since 1999, says Renaissance Capital.

Meanwhile investors have been trying to value tech stocks during a global economic downturn but at a time the world has also gone hard virtual.

Food delivery startup DoorDash had a similarly stratospheric public listing the day before, raising $3.4 billion in a first day of trading when its share price shot up 86%.

Both companies, like Uber, form part of a gig and sharing economy that has been as successful as it has been controversial, amid claims of exploiting workers and, in the case of Airbnb, neighborhoods and rental markets.

But last year, the gig economy didn't fare nearly as well in IPOs.

Uber's own public listing disappointed its investors, with its share price sinking from $45 to $41 in the first week, and a promised $120 billion capitalization shriveling into a market valuation of $69 billion.

WeWork's IPO, still worse, turned into a fiasco, with chief executive Adam Neumann shown the door and the company laying off 2,400 employees in November.

Viewed one way, the coronavirus has shifted the transition to the sharing and gig economies, accelerating trends that were there already.

Viewed another, low interest rates and fiscal stimulus have this year driven investors toward risky bets, divorcing valuations from the reality the rest of us mortals inhabit.

A possible explanation for the massive first-day price rises, when they do appear, is venture capital firms' attempts to underprice IPOs so they can pocket large gains, suggests investor and commentator Bill Gurley.

But tech shares are riding high partly because COVID-19 has hammered all other sectors of the economy. So what will investors do once vaccines bring back the potential of something resembling normality in 2021?

That is, just to pick a figure, the $100 billion question.