According to new research, the best provider of wireless service in the US might soon be TracFone, a US subsidiary of Mexican telecommunications giant America Movil.

According to FierceWireless, America Movil's US MVNO, TracFone, is testing a service called SmartSIM across two of its brands, Simple Mobile and Straight Talk. SmartSIM promises to instantly connect users to the best wireless network available for their current phone and location.

"What if there was a wireless brand that instantly connected you to the strongest cellular network?" TracFone wrote in its now-deleted marketing material for the SmartSIM test, according to FierceWireless. "Our new SmartSIM plan takes the guesswork out of choosing the best service."

TracFone did not respond to questions from FierceWireless on SmartSIM. That's not a surprise considering TracFone has never provided me with any information about anything, ever, in the 15 years I have been covering the company.

But TracFone is certainly in a position to launch a product like SmartSIM, considering it is an MVNO of all the major US wireless network operators including AT&T, Verizon and T-Mobile. As an MVNO, it does not operate any cell towers  instead it piggybacks on the networks operated by other companies. However, it does provide services like customer activations and billing. In fact, TracFone is by far the largest MVNO in the US market, counting around 20 million US customers across its various brands.

Moreover, new technology like eSIM  which is slowly but surely making its way into the US market  has been widely hailed as supporting exactly the kind of service TracFone advertised with SmartSIM.

Indeed, Google's own MVNO, Google Fi, makes use of eSIM technology to connect users to the best wireless network near them. T-Mobile, Sprint and U.S. Cellular are the US wireless network operators that support Google Fi  Verizon and AT&T have eschewed support for the offering.

Imagining SmartSIM
The notion of an eSIM-powered SmartSIM offering from TracFone  which does enjoy deals with Verizon, AT&T and others  is so compelling that wireless network monitoring company Tutela used its existing data to calculate exactly what a SmartSIM product might look like.

Perhaps not surprisingly, the company found that SmartSIM would outperform the sum of its parts:

The company said its SmartSIM findings also line up with research it conducted into Google Fi, which found that the Google MVNO often provides better service than any one of its host networks.

To be clear, the above chart from Tutela is simply a simulation of a service that has not been officially announced  one that hasn't even been acknowledged by the company that hinted at it. Moreover, even if TracFone does launch an eSIM-powered SmartSIM program, it's unclear how it would perform in the real world.

"Although the data suggests that SmartSIM has the potential to improve mobile experience for users, the magnitude of the improvement would come down to implementation, and how a handset (or TracFone) selects the 'best' network in a region," Tutela wrote in a report on SmartSIM. "How that determination is made will be critical  in dense urban areas, the network with the best signal strength may be suffering from congestion, so selecting the network with the strongest signal would be sub-optimal. Equally, how quickly a device switches network, and whether it's able to switch based on the time of day, will be critical to determine the network performance."

Nonetheless, with its long history of MVNO operations in the US, its massive customer base, and its tight agreements with US wireless network operators and handset providers, coupled with the rise of eSIM technology in a growing number of phones, TracFone is certainly positioned to make a service like SmartSIM a reality.

Finally, that also raises the question of which wireless network operator would command the majority of SmartSIM connections, if TracFone did manage to design it to snoop out the best network available. Tutela supposes the answer is: Verizon. 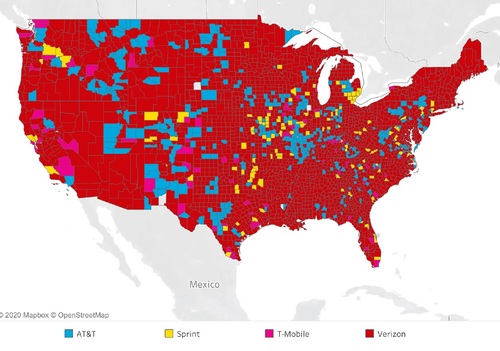 Tutela measured operators by the best signal strength they provide, noting that most of the country is covered with the best signal by Verizon, while AT&T maintains a strong presence in some regions.
(Source: Tutela)

Again, SmartSIM today remains only a possibility rather than a concrete offering, and so drawing any firm conclusions about the service at this point is more of an exercise in mental gymnastics than actual forecasting. But, considering many of the pieces are falling into place for a service like SmartSIM from TracFone or someone else, it's worth giving the topic some thought.

Christian Smith 3/1/2020 | 4:58:48 PM
Trouble Working With All MNOs It'll be interesting to see where SmartSIM goes. I wrote a short reponse to this post-- the simulation doesn't reflect what's actually likely to happen. AT&T and Verizon would probably be resistant to make any arrangements that would allow TracFone to offer service that exceedes their own in quality.
Reply | Post Message | MESSAGES LIST | START A BOARD

TimCase 2/28/2020 | 7:44:41 AM
Wireless Provider The notion of an eSIM-powered SmartSIM offering from TracFone – which does enjoy deals with Verizon, AT&T and others – is so compelling that wireless network monitoring company Tutela used its existing data to calculate exactly what a SmartSIM product might look like.

Open RAN remains a relatively new and untested approach to 5G and potentially 6G. As a result, today's partners could become tomorrow's competitors.

Could 5G ruin the night sky?