AT&T's FirstNet buildout nears completion, albeit with some hiccups

AT&T said it is now roughly three-fourths of the way finished with its construction of a dedicated, nationwide 4G LTE network for public-safety workers. That puts the company ahead of schedule, executives boasted.

"Despite what Verizon claims with their grossly outdated statistics, the truth is we added significantly more coverage than any other wireless provider last year  making our total coverage difference nearly imperceptible," boasted Chris Sambar, EVP of technology and operations at AT&T, in a release.

Verizon, which has long enjoyed a comfortable market share among US public-safety users, has been working to counter the rise of FirstNet. 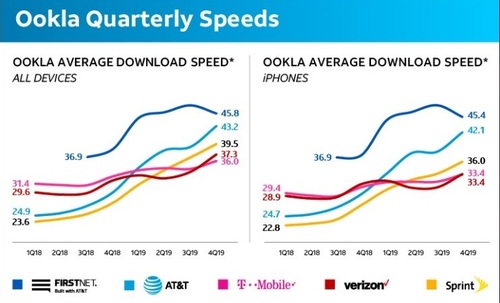 FirstNet speeds are faster than those of other providers, including AT&T.
(Source: AT&T, citing Ookla data)

AT&T said its FirstNet customers used almost four times as much data per user during the recent Super Bowl game in Miami than its other customers. And that traffic, AT&T noted, didn't have to compete with fans' voice and data traffic because FirstNet users receive priority access to AT&T's network resources.

In total, AT&T said its FirstNet network now covers a total of 2.61 million square miles of the US, or around 45% of the country's total territory. The operator said around 11,000 public-safety agencies, totaling 1.2 million connections nationwide, now subscribe to FirstNet.

"We believe AT&T's growing strength with FirstNet plus a price cut of its own in the fall drove the better net adds," wrote the Wall Street analysts at Raymond James in a recent note to investors, pointing to the fact that AT&T reported 229,000 net customer additions in the fourth quarter of 2019.

FirstNet vendors and partners paint mixed picture
But AT&T's FirstNet buildout has had some hiccups. ATN International confirmed its portion of the buildout has been delayed slightly and now will start in the first quarter of 2020, gaining steam in the second quarter. The company didn't provide a reason for the delay.

"I think it was just a combination of stuff, really. It's just sites work. It's just typical stuff, honestly," ATN's CFO Justin Benincasa said during the company's most recent conference call with analysts, according to a Seeking Alpha transcript of the event.

AT&T last year announced it will pay ATN's Commnet Wireless $167.5 million to build and maintain AT&T's wireless network in the Southwestern US. AT&T will use the network for its own commercial mobile services and for its public-safety offerings through FirstNet. Commnet is one of several regional wireless network operators AT&T is working with to expand its FirstNet coverage area.

Building on ATN's comments, executives from cell tower company SBA Communications said they're only 50% finished with their portion of the FirstNet buildout. AT&T has said that it's fully 75% completed with the work.

"I think their 75% includes a lot of advance work ... from our perspective, we think it's closer to 50%," SBA CEO Jeffrey Stoops said during his company's quarterly call with investors, according to a Seeking Alpha transcript of his remarks. Its unclear what role SBA plays in the operators buildout but AT&T describes it as small.

Other vendors for FirstNet offered comments more in line with AT&T's timeline. "We now expect FirstNet orders to moderate more than originally expected, given the program is expected to be completed early," CommScope EVP and CTO Alexander Pease said during his company's recent quarterly call with investors, according to an earnings call transcript.

CommScope is providing antennas to AT&T for its LTE and 5G efforts as well as for FirstNet. However, CommScope officials acknowledged it's difficult for the company to know whether its equipment is headed toward AT&T's commercial LTE network or for its FirstNet buildout.

FirstNet is a federal entity charged with building a nationwide wireless network for public-safety agencies, including police, firefighters and others, using around $6.5 billion and 20MHz of unused spectrum in the 700MHz band. The effort stems from communications troubles first responders encountered during their reactions to the September 11, 2001, terrorist attacks in New York City.

AT&T won the FirstNet contract in 2017 and pledged to construct a network using the spectrum within five years. To do that, AT&T is installing FirstNet 700MHz transmitters on its existing towers, and its FirstNet and commercial customers both have access to FirstNet's spectrum as well as AT&T's other spectrum bands, though FirstNet customers receive priority access. As AT&T reaches preset FirstNet buildout goals, it receives portions of the full $6.5 billion FirstNet allotment.